After a three-decade career with Safeway/Albertsons, Lori Raya is beginning a new chapter as SpartanNash’s chief merchandising and marketing officer, effective Feb. 18.

Most recently president of Albertsons Cos.’ Southern California division from 2015-2018 following her role in the same capacity at Vons, Raya led the post-merger transition with Safeway and integration of multiple banner teams for the second-largest grocery store chain in the United States, which includes about 2,200 stores and 250,000 employees. 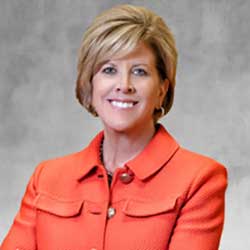 Raya will report to SpartanNash President and CEO David Staples and will assume the chief merchandising and marketing officer position from Larry Pierce, who will be retiring in September.

In her new role at the Grand Rapids, Mich.-based grocery distributor, Raya will be responsible for developing and executing the enterprisewide merchandising and marketing strategy while providing strategic direction to develop, analyze and implement product assortment, brand positioning, sales planning, pricing, promotion, sourcing and distribution for independent customers and corporate-owned stores.

Raya will also be responsible for increasing sales and market share, improving productivity and profitability and cultivating an engaged, customer-centric workforce while also leading efforts to enhance the customer experience both in-store and online.

“Lori’s success as a strategic thinker, collaborative influencer, change manager, community contributor and visionary leader has enabled her to lead marketing and merchandising teams to deliver innovative, customer-focused changes while driving sales and supporting associate development,” Staples said in a statement. “Her career path is also inspiring to all those who love this industry and want to help take the company to the next level. We look forward to having her onboard.”

During the course of her 31-year grocery industry career with Safeway, Raya’s responsibilities steadily expanded as she worked her way up the ranks from a courtesy clerk in Safeway’s Denver division to store manager, district manager, VP of retail operations, group VP of strategic initiatives, and multiple senior category management positions prior to serving as the first woman divisional president in Von’s 107-year history from 2012-2015.

Pierce will transition his duties to Raya and focus on special projects thereafter until his planned retirement in September, according to the company. He joined SpartanNash in 2008 from Coca-Cola Enterprises and has been EVP of merchandising and marketing since 2014. “Larry’s leadership, knowledge of the wholesale and grocery industry, and commitment to innovation have been key to our success,” said Staples, “and we appreciate his assistance throughout this transitional period.”

SpartanNash’s core businesses includes distributing grocery products to a diverse group of independent and chain retailers, as well as to its corporate-owned stores and U.S. military commissaries and exchanges as well as fresh produce distribution and fresh food processing. SpartanNash serves customers in all 50 states and the District of Columbia, Europe, Cuba, Puerto Rico, Bahrain, Djibouti and Egypt.