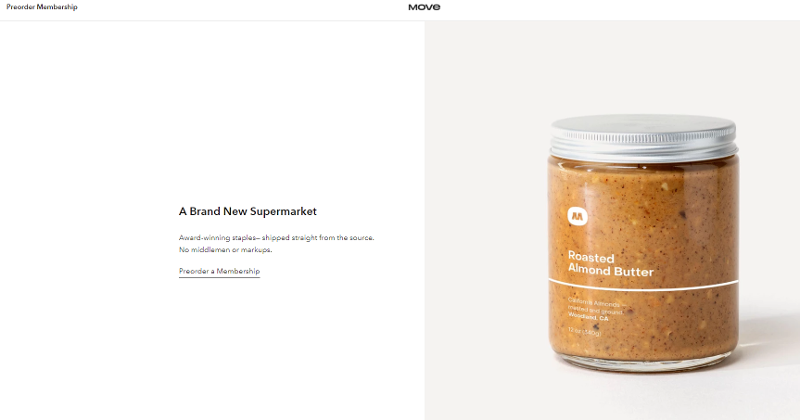 A membership-based digital supermarket called Move promises to offer its members collaboratively curated grocery staples at the fairest prices, but its CEO still has more in mind.

“We don’t want to just launch a store,” Chai Mishra said in an interview. “We want to democratize retail.”

Move is now inviting customers to join on Kickstarter, allowing them to lock in a $95 annual membership for life. The premise of Move is to offer private brand grocery staples curated by member feedback and shipped direct to the consumer.

“Most retailers share the same thesis of how consumers shop,” Mishra said. “It’s Amazon’s model—offer the widest variety and lowest prices. That’s a fair thesis. But what we believe is that there’s another ideology for how people shop: Best product possible at the fairest price possible.”

With membership starting at $95, backers can lock in this annual rate even as prices go up after the crowdfunding campaign, he said. Kickstarter backers will be able to start placing orders in February 2020, months ahead of the general public.

Starting with 100 essential staples at launch, Move will scale to 500 products by the end of 2021. Instead of competing on the size of selection, Move will focus on quality over quantity, with the belief that one great product is better than 100 average ones.

“Amazon offers one-star products. We think all of the products should be five stars,” said Mishra. “Why would you sell stuff that you know is terrible?”

The supermarket experience has not changed in more than three decades despite consumer behavior changing with the internet, Mishra said. In fact, 97% of grocery shopping is still done offline. The Move supermarket will be stocked with staples from award-winning artisans, prepared meals from Michelin-starred chefs and ethically sourced staples from around the world—all selected by Move members.

Here’s how Mishra says the digital shopping democracy will work: When Move is ready to launch a new coffee, for example, it will search for the best, ethically sourced option from three continents, send out samples to thousands of members, and ask the members to vote on which coffee will become the grocer’s staple coffee.

Move will stock high-frequency products. “We’re completely focused on staples,” said Mishra. “Not a lot of niche, like a craft beer that’s only found in San Francisco or Denver.” But rather, high-quality products that allow members to keep a fully stocked kitchen and pantry, including shelf-stable, refrigerated and frozen items all delivered in temperature-controlled packaging.

“Think about this,” said Mishra. “The American grocery sector is the largest consumer sector in the world—$700 billion per year. It’s also the sector with the lowest digital penetration—less than 3%. Traditional supermarket giants haven’t innovated in decades. And the new e-commerce players haven’t done much to replace them. That’s why we’re building the first, national digital supermarket.”

“We control every part of the retail journey from design to delivery,” he said. That allows us to make products that are tangibly higher quality, more affordable and more ethical.”

As part of San Francisco-based Move’s transparency, it plans to publish all prices it pays for goods and services, as well as what it pays its warehouse workers, which is $15 an hour, Mishra said. It will also publish an audit on all products, regarding effects on the environment.

“We want to put information in front of the customer,” said Mishra. “We want to provide as much visibility as we can about all of our products.”