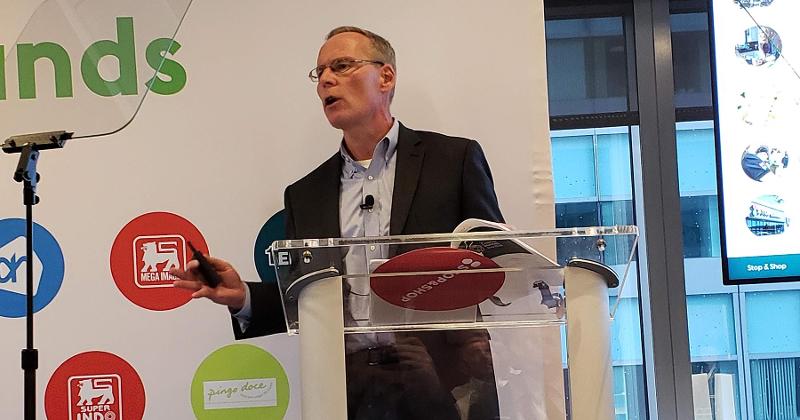 Mark McGowan, who as president of Stop & Shop introduced a comprehensive brand renewal only to be upended by an 11-day worker strike, will be departing the company in coming weeks and will be replaced by Gordon Reid, McGowan’s counterpart at sister brand Giant Food, parent company Ahold Delhaize USA said.

Stop & Shop is Ahold Delhaize’s largest U.S. brand with 415 stores. A release from the company said McGowan made the decision to depart, and that, at the company’s request, he would stay on through the end of the year. Reid is scheduled to begin transitioning to his role at Stop & Shop in the coming weeks and will officially begin duties in late July, Ahold Delhaize said.

Ira Kress, SVP of operations for Giant Food, has been appointed interim president for Giant.

“Mark McGowan has had a tremendous impact for the Ahold Delhaize USA brands, as well as the communities they serve, and we thank him for his 30 years of tireless service,” Ahold Delhaize USA CEO Kevin Holt said in a statement. “Under his leadership, Stop & Shop has built a strong foundation for transformation and expanded success that continues through our ‘Reimagine Stop & Shop’ initiative. As Mark transitions, I have full confidence that Gordon Reid is the right leader to continue this transformation by repositioning the business for future success and rebuilding customer loyalty.”

Ahold officials have made improving growth at Stop & Shop a major element of its “Leading Together” strategy. The “Reimagine Stop & Shop” initiative, announced by McGowan last fall, contemplates an incremental $100 million to $150 million capital investment in modernizing its store fleet market by market, adding new product categories, merchandising and foodservice elements to stores; lowering prices; and incorporating technologies such as robotics to expand efficiency and omnichannel.

A pilot of the program rolled out to 21 stores in Connecticut last fall; the initiative is now underway in Long Island, N.Y.

McGowan joined Stop & Shop as a manager trainee in 1991 and has a variety of roles at the brand and parent Ahold.

“It’s been an honor and privilege to lead the Stop & Shop brand. I’m grateful for our associates who are incredibly dedicated to serving our customers every day, and I’m extremely proud of all that we have accomplished together,” McGowan said in a statement. “As Stop & Shop embarks on the next phase of its transformation, now is the right time for me to make this change. I look forward to working closely with Gordon and the entire team to ensure a seamless transition.”

The strike, carried out by five locals of the United Food and Commercial Workers Union in April of this year, all but wiped out Easter and Passover sales throughout the chain’s New England stores. Ahold Delhaize officials acknowledged the event cost the company about $200 million in sales and underlying profits of $90 million to $110 million.

Those figures would be absorbed in the retailer’s fiscal second quarter, expected to be announced in August.

Although the strike appeared to have won workers modest gains on wages, bonus pay and healthcare, Ahold Delhaize officials have expressed that they were satisfied with the contract and said afterward the settlement could have been achieved in negotiation.

Reid is currently president of Giant Food, which has 165 stores in the greater Washington, D.C., area. Reid joined Giant in 2013 and has more than 35 years of international retail experience, having served in a variety of management roles at Tesco, Boots, A.S. Watson Group and The Dairy Farm Group before joining Giant Food. Reid is active in the community and is a member of the USO Washington-Baltimore executive board and the Capital Area Food Bank board, as well as a member of the Partnership for a Healthier America. He holds a Bachelor of Science in pharmacy from Heriot-Watt University in Edinburgh, U.K., and a master’s degree in business administration from Nottingham University Business School in the U.K.

“We are excited for Gordon to join the Stop & Shop brand,” said Holt. “Gordon is an excellent leader of people, with a strong focus on serving customers, engaging associates and supporting local communities. During his time at Giant Food, the brand has successfully grown sales and market share, and has strong associate engagement results.”