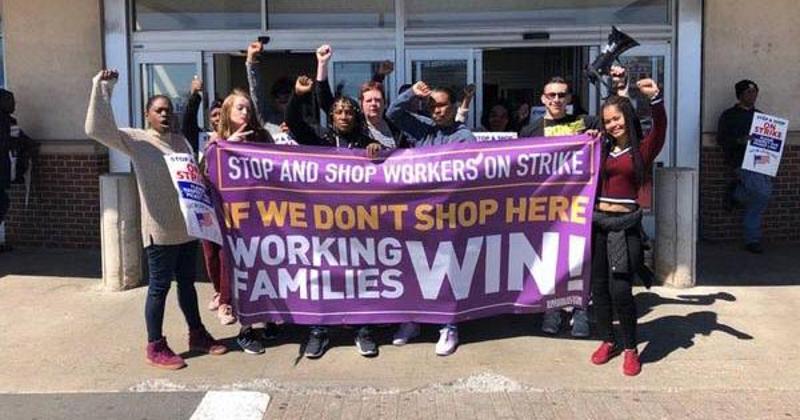 As a strike by 31,000 workers approached the end of its first week at Stop & Shop, the retailer was taking a beating in the realm of popular opinion, a business loss estimated at $20 million a day, and growing concern that a continuation could impair the chain long after labor peace is reached.

The irony was that one of the last union-organized retailers in its market was losing the bulk of its business to nonunion competition, and essentially absorbing as many blows for wider societal anxieties—from debate over public subsidies to the encroachment of robots in the workplace—than for the wages and benefits at issue in its stalled contract negotiations.

To be sure, it could be argued that Stop & Shop’s biggest struggle since workers walked off the job at 253 stores April 11 has been getting its message in perspective. Missives on a website intended to update its labor relations status politely reference what it calls “misinformation” and “misunderstandings” over its positions, which it insists are necessary to remain competitive with the changing market. But at some level, the “changing market” is what has everyone so on edge in the first place, and the details don’t much matter.

In a culture of divisiveness, side-taking and online avengers, an old-fashioned worker dispute, taking place in neighborhoods, has been remarkably fresh, tapping in to a fed-up consumer base seemingly dying to stick it to someone.

“Anyone who is interested in our current moment should pay attention to this strike,” Francis Ryan, assistant teaching professor in the Rutgers University School of Management and Labor Relations, told me in a conversation this week. “A strike is a bold act, and I think they’re tapping into something that goes beyond the retail sector.”

Consumer indigestion of the rapid pace of innovation sweeping retail today is surely part of that. Stop & Shop’s determination to be at the forefront of much of that change—as evidenced by its pursuit of micro-pick centers and a fleet of in-store spill-seeking robots—may be taking a psychic toll on workers and shoppers. Larger brushes with controversy concerning tech-enabled shopping, such as Instacart’s recent worker skirmishes or Amazon’s backfired headquarters search, appear to have awoken shoppers to a sense that the playing fields are unequal. The message from last week’s Walmart-Amazon chirps could be interpreted as it’s OK for one multibillion retailer to not pay taxes as long as another multibillion retailer underpays it workers. Shoppers, of course, are growing distrustful.

Ryan raised the possibility that the dispute reveals an undercurrent of a U.S. labor rebound, noting that recent teacher strikes have gained widespread popular support, even in parts of the country where local law has made them illegal. Though union membership—and, not coincidentally, strikes—have dwindled considerably over the past 30 years, America’s trends in labor are historically cyclical and tend to move slowly. The eight-hour work day, established in 1937, was a labor rallying cry as far back as 1837, he says.

“Perhaps there is a shift in the public view, where they see, ‘Here are these underdogs who are tired of taking it on the chin and they’re fighting back,’” Ryan says. “I don’t know, but I think there’s something in the air. And I think the UFCW is looking beyond Stop & Shop and maybe seeing this a moment where they can be an effective agent for all the workers of the industry, and perhaps this could be a calling card for organizing other markets.”

That competitors might face their own worker uprising for a change can’t be a concern at the moment for Stop & Shop, where some stores are temporarily closed and others are running with reduced hours, reduced services and reduced sales. Consultant Burt P. Flickinger III estimates the strike’s first week has cost the company about $140 million in revenue—and, because the strike aligned with the typically heavy perishable shopping week before Easter and Passover, outsized profits of about $2 million a day.

“This is one of the biggest shopping weeks of the year, where people are eating big meals at home, and you sell lamb and seafood at 40% margins instead of other weeks where it's household and paper goods at 20% margins,” Flickinger told me.

Much of this business, he says, is being lost to nonunion competitors such as Costco, BJ’s, Walmart, Market Basket, Big Y and Wegmans, to name a few. A further irony, he says, is that about a third of the workers on strike now initially came to the company from defunct organized competitors such as Purity Supreme and A&P. While saving those jobs, Stop & Shop ultimately put itself in the dense but economically disadvantageous position it is trying to negotiate its way out of now.

“It surprises me to see what’s happening now because we’ve got decades of the company and the union working so effectively together to turn Stop & Shop from a small chain into a dominant one,” Flickinger says. “Forty years ago, Stop & Shop was the small chain.”

While it's anyone’s guess as to how soon the sides reach a settlement, they will have a job ahead of them in regaining shoppers and repairing their image. In the nation’s last large supermarket labor dispute—the Southern California strike-lockout of 2003 and 2004—the affected chains never fully regained the business they had before the strike, ultimately accelerating the influence and expansion of lower-cost alternatives, Flickinger says. And the workers that sat that one out ultimately didn’t gain much either. “Everyone was a loser,” he says.