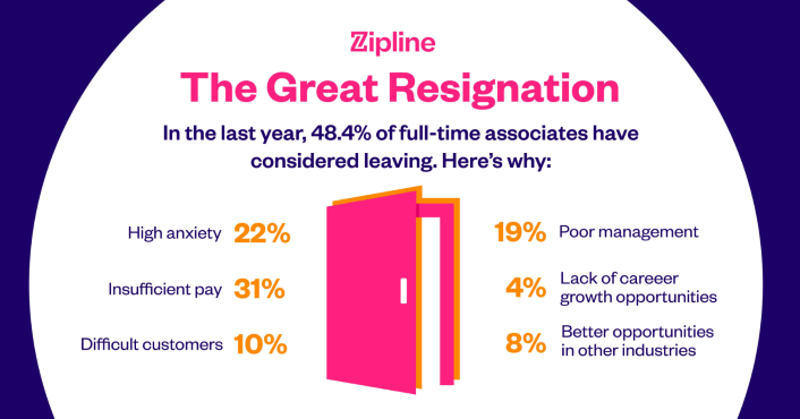 Pandemic stresses continue to take a toll on American retail workers, a new survey from retail operations platform Zipline suggests, with 48% of retail workers polled saying they've considered quitting their job in the past year, and 64% saying they're seeing more aggression from customers.

The survey of 512 full-time, in-store retail associates, fielded in November and December 2021, also found that the share of retail workers eyeing the exit door has grown: In Zipline's previous workers survey, conducted last spring, around 41% of respondents said they had considered leaving their job.

Among those who told Zipline this time around that they had thought about quitting, more than half said they were mulling leaving the industry altogether.

Greater confidence in their job prospects likely accounts for some of that willingness to leave: 4.5% of retail workers quit their job in December—up from 3.1% who quit in December 2020, according to the Bureau of Labor Statistics' latest monthly Job Openings and Labor Turnover Summary (JOLTS) report. And retailers had more than 1 million job openings at the close of 2021 but hired just 861,000 workers in December. That demand for labor has pushed up wages, with leading grocery retailers such as Walmart, Amazon and SpartanNash saying in their latest earnings calls that rising labor costs have pressured margins.

For those in the market for a retail job change, it's a good time to be looking around. For retailers themselves, results of Zipline's survey point to potential areas of concern that might warrant revisiting in support of workforce retention efforts.

"It's clear from the report that many retail associates are struggling during this turbulent time, but the data also helps to illuminate a path forward for retailers," Zipline co-founder and CEO Melissa Wong said in a news release. A slightly larger share of respondents (48%), Zipline noted, said their manager actively seeks to improve their mental well-being than those who said their mental health is not a concern to their manager (45%). Just under half of respondents (49%) said their company often recognizes their hard work, and 45% said their company already provides some mental-health offering—counseling/therapy benefits, discounted gym membership or free access to meditation apps, for example.

"There’s room for growth, and it’s promising to see that some companies are already taking steps to improve employee satisfaction," Wong said.