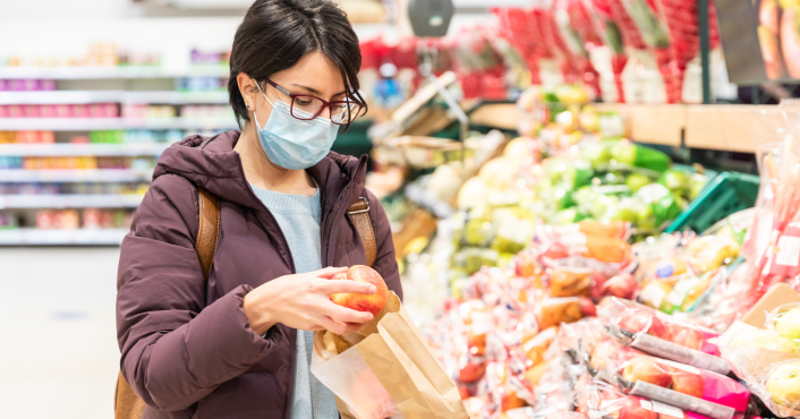 Most U.S. consumers have been noticing higher prices at the grocery store for months—some 90% told market researcher IRI back in November that they were seeing prices creep up across various grocery departments. But now, more say they're changing their buying behaviors at the supermarket and beyond in response.

In February, 75% of consumers said they had made at least one change to their grocery-shopping behaviors in an effort to keep spending in check in the face of accelerating inflation, according to IRI's latest grocery performance report, produced with 210 Analytics. That's up from 64% who said the same in January and 61% who reported inflation-prompted changes in their shopping selections in November.

In addition, consumers in February reported that they continued to keep their restaurant visits scaled back—not in response to COVID-19 concerns, which fell during the month, but in an effort to save money, IRI Team Lead for Fresh Jonna Parker said. "Sixty-three percent of shoppers are trying to save money by purchasing less restaurant food and preparing more food at home," IRI reported. Survey respondents estimated that about 82% of their meals in February were prepared and eaten at home.

What inflation-managing measures are they taking? About 4 in 10 (41%) said they're focused on sales promotions. Nearly as large a share, 39%, said they're keeping an eye out for bulk discounts or buy one, get one offers. And 38% said they're seeking to save by simply buying less in a given trip.

Consumers' move to skip some purchases of what, in a less inflationary time, may have been frequent go-to items is noticeable especially in the fresh perimeter, which has seen above-average inflation in several product categories. Consider fresh produce: Fresh fruit and vegetable units sold were down 5% in February from year-ago levels, with overall produce volumes down 5.7%, IRI reported. Meanwhile, dollar sales of fresh produce climbed 4.6%. (Prices per pound for fresh produce were up 10.9% last month from February 2021.)

"Consumers are focused on finding good prices and promotions and minimizing waste at home, which puts great emphasis on freshness and shelf life in the store," said Joe Watson, VP of retail, foodservice and wholesale for the International Fresh Produce Association, in IRI's report. "At the same time, consumers balance their spending across canned, frozen and fresh purchases and many simply buy less to stick to their budgets."

For the five fresh-department categories that IRI analyzes—produce, refrigerated (including dairy), deli/prepared, meat and seafood—only deli eked out unit gains (up 0.8%) in February from the year-ago period. In the four other fresh categories, despite a decline in unit sales, dollar sales were up vs. February 2021. Fresh seafood saw the steepest declines in February, with units sold down almost 21% and dollar sales down 12%.

Some consumers, fearing even higher prices later this spring, reported stocking up on top items in February. Forty-five percent of consumers told IRI they had made stock-up purchases in February; among them, 16% said they had done so out of concern that prices could be higher in future visits. A larger share, 20%, expressed concern about future availability of desired items—a noninflationary factor that also needs to be considered in looking at sales for the month, Watson said.

"We certainly have to acknowledge that big price increases tend to pressure volume sales,” said Watson. "But it is also important to note that it is hard to measure the effect of supply-chain disruption: We cannot sell what we do not have." Noting that stockouts "have been a severe problem for departments across the store since the start of the pandemic," Watson added that "actively communicating and providing recommendations for alternatives are important best practices" in managing inventory disruptions.