Emphasizing that its merger produced a springboard for growth along with scale and synergies, Ahold Delhaize set a new strategic plan that will draw on experience to reposition its retail brands and advance its omnichannel capabilities to serve a changing U.S. customer.

Frans Muller, who took over as CEO of the Netherlands-based retailer this summer, said the “Leading Together” strategy will accelerate growth of the platform created in the Ahold and Delhaize merger. The deal united Ahold’s U.S. banners Stop & Shop, Giant/Martin’s and Giant Food with Delhaize’s Hannaford and Food Lion brands. It also created a decentralized U.S. structure that allows each brand to focus on local markets and central business services and online units that provide cross-brand support. The group is charging into the new strategy on the strength of strong sales, earnings and market share gains realized in its fiscal third quarter, reported earlier this month. 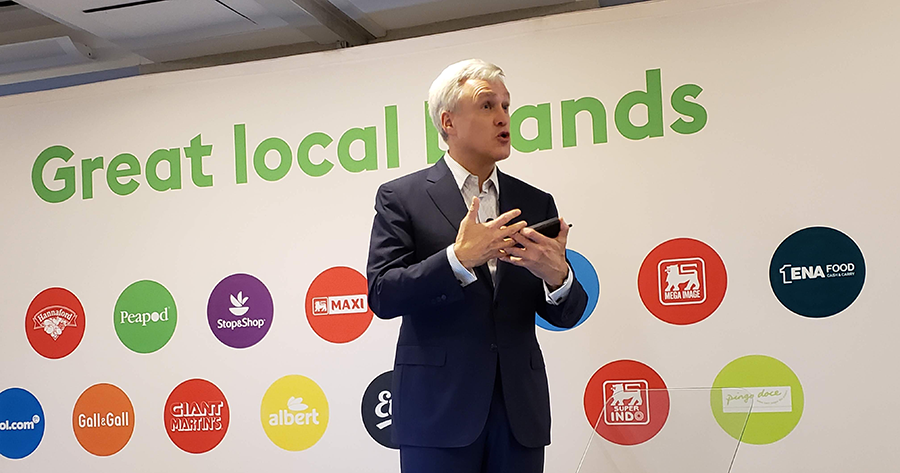 Muller’s plan contemplates using Ahold Delhaize’s new scale to build on that foundation, gaining sales and market share through a combination of technology and e-commerce advances, further emphasis on healthy and sustainable foods, partnerships with vendors and technology firms, and a comprehensive reset for its largest U.S. banner, Stop & Shop, that will include all of those elements.

“We worked very hard for two years on integration,” Muller said in a Nov. 13 Capital Markets Day presentation before media and analysts in New York. “Now is the time to take us to the next phase of growth and market share gain.”

Muller said “Leading Together” indicated ambitions in both “Leading” (gaining market share through innovation as well as leadership in fresh and healthy foods) and “Together” (utilizing partnerships with vendors, store teams and others) to fulfill those ambitions.

The Stop & Shop repositioning, which debuted at 21 stores in the Hartford, Conn., market last month, will address the only of the company’s U.S. banners to have lost market share over the last year. Stop & Shop has experienced flat sales over the past five years. The rebranding borrows a plan of attack from its sister chain, Food Lion, which has shown comp-store sales gains for 24 consecutive quarters on the strength of its “Easy Fresh and Affordable” strategy, a comprehensive rebranding initiative that brought new traffic and volume to the once-struggling chain.

“We know how to reposition a brand,” said Kevin Holt, CEO of Ahold Delhaize, during the presentation.

Like Food Lion, Stop & Shop intends to roll out its new positioning in marketwide phases at a rate of about two markets a year over the next five years, at a total cost of $1.6 billion to $2 billion for its 416 stores. The program will start next spring at Stop & Shop stores on Long Island, said Mark McGowan, Stop & Shop’s president. 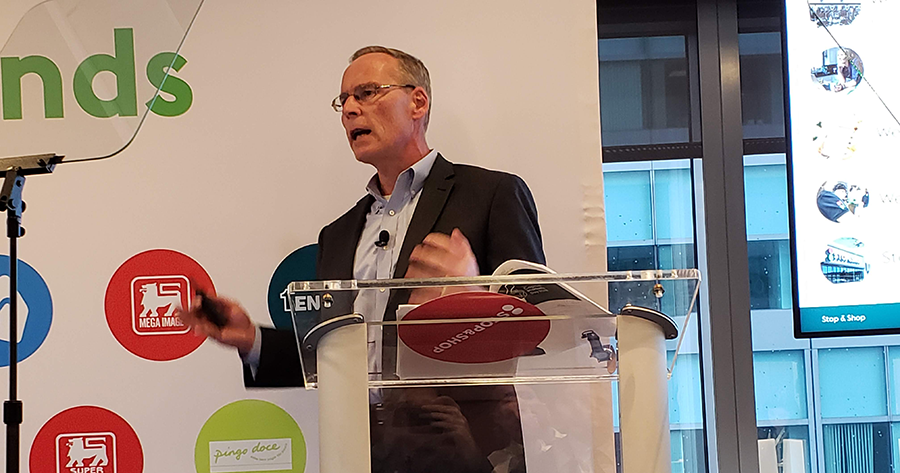 Stop & Shop’s new strategy includes a dramatic increase in prepared foods that Holt described as one of Ahold Delhaize’s best revenue opportunities. “This is an area we’ve been underpenetrated in,” he said, “but we see it as a way to take share from quick service and build frequency.”

Stop & Shop’s evolution is also built around adapting to an omnichannel consumer, itself a major element of the “Better Together” strategy. In his presentation, Muller set a new goal to double its current global online sales to about $7.9 billion by 2021. The company is ahead of schedule to beat a previously stated intention to reach $5.6 billion in online sales by 2020, he noted.

This growth is coming despite getting something less than hoped out of U.S. online sales, which grew by about 10% to an annualized rate of about $1 billion–a relatively slow rate of growth among food retailers in the U.S. Ambitions are considerably higher, said J.J. Fleeman, president of the newly christened Peapod Digital Labs, which will oversee Ahold Delhaize’s overarching omnichannel efforts—or what Fleeman called an “ecosystem” in the U.S.—that includes the Peapod e-commerce unit but also encompasses new fulfillment centers, strategic partnerships and digital content to support all phases of the shopping journey, such as recipes and planning tools.

Holt said Ahold Delhaize would take U.S. market share organically behind consumer-focused brands with eyes on growing sales volume—“we’re about selling stuff,” he noted more than once—but also inorganically by positioning itself as a “consolidator of choice” as the cost and competition sparked by omnichannel retail continue to bring pressure to competitors that lack its scale.

“We believe that customers are at the center of everything we do. All of our brand purposes are focused around this idea that the customer is the primary element of focus,” Holt said. “We’re going to leverage the power of local, scale and omnichannel. We’re committed to this, and will continue to drive for this.”