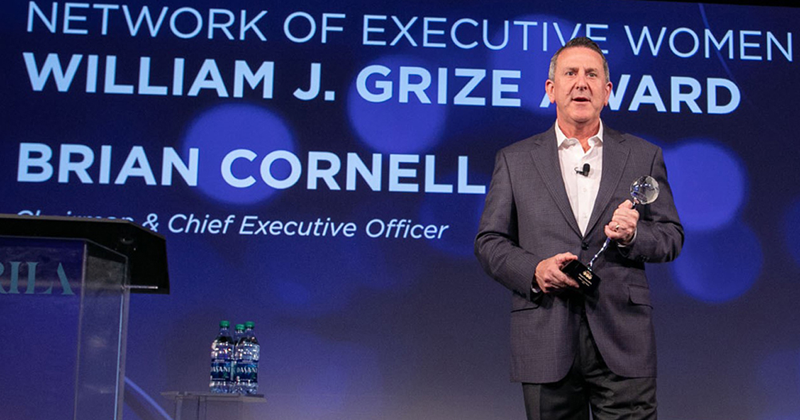 The namesake of NEW’s annual William J. Grize Award honors the late president and CEO of Stop & Shop, an early champion of gender diversity. The organization has honored select food industry leaders’ and companies’ “enduring commitment to the advancement of women and to creating a diverse and inclusive workplace” with the Grize award since 2011.

“Target’s leadership team understands that creating a gender diverse and inclusive workplace is a business imperative,” said NEW President and CEO Sarah Alter, who presented the award to Target Chairman and CEO Brian Cornell. The Minneapolis-based retailer’s achievements “to level the playing field and realize the benefits of women’s leadership have served as models for leaders in retail and beyond,” added Alter, noting that Target’s commitment to gender equality begins in the C-suite.

Target signed the White House Equal Pay Pledge in 2016, and has continued to reinforce it with a comprehensive annual pay audit and leadership training designed to reduce bias in decision-making.

“But we know real change requires commitment and follow-through at every level,” said Alter, who pointed to Target’s strong gender diversity efforts across functions, which ensure that “women are represented, heard, recognized and developed as leaders at headquarters and in the field.”

Highlights of Target’s admirable gender diversity record is demonstrated in ranks of its store managers, nearly half of whom are female, each overseeing up to 500 employees and responsible for maximizing profitability, guest experience and sales. Overall, women comprise 36% of Target’s board of directors and 45% of its executives.

Target diversity efforts scored a banner year in 2018, when it was named among DiversityInc’s Top 50 Companies for Diversity, earned a score of 100 on The Human Rights Campaign’s Corporate Equality Index, was selected as one of the Top Companies for Executive Women by the National Association for Female Executives and was recognized by AnitaB.org as a Top Company for Women Technologists.

“As one of the country’s largest and most successful businesses, Target’s influence on business norms can’t be understated,” said Alter, who noted Cornell’s public zero-tolerance stance on sexual harassment and gender bias along with his advocacy of male leaders to mentor and sponsor women for leadership roles.

In 2016, Cornell and Indra K. Nooyi, then chairman and CEO of PepsiCo Inc., co-chaired the NEW Future Fund, the Network of Executive Women’s $5 million fundraising initiative. “At the time, [Brian] said, ‘There’s no question we’re making progress, but we still have work to do to achieve gender parity,’” Alter said before presenting the award. “Target continues to be a leader in that work.”

Prior recipients of the William J. Grize Award are:

Linda Dillman, Hewlett-Packard, honored for her work at Walmart Inc.

Jeri Dunn of Bacardi, honored for her work at Tyson Foods

NEW represents more than 12,000 members, 900 companies, 115 corporate partners and 22 regions in the U.S. and Canada advancing all women and building business.