The “wedge” isn’t gone entirely from Stop & Shop, at least not yet. The four-color logo, sometimes referred to the “fruit bowl” or compared to a tropical bird arising from its nest, was introduced a decade ago as a common logo for Ahold USA’s sister Stop & Shop and Giant Food brands. Ahold subsequently used the wedge as an efficient way to signify a common store brand without accompanying banner names, and those still live on in canned peaches and bagged potatoes and frozen mozzarella sticks inside Stop & Shop’s stores. And the wedge still resides atop sales circulars and on storefronts at nearly 400 stores from Boston to New Jersey, not to mention all of Giant’s locations.

But as evidenced by the first round of repositioned Stop & Shops unveiled recently by parent Ahold Delhaize, the wedge is literally getting the red light as Stop & Shop transitions to a new logo inspired by the “stoplight” imaging the wedge once replaced. In an address at Ahold Delhaize’s Capital Markets Day event, Stop & Shop President Mark McGowan made a point of pasting a cutout of the new logo on top of a Stop & Shop wedge on a backdrop illustrating each of the company’s global brands.

U.S. trademark records indicate Ahold Delhaize has made a bunch of new applications to use the red and green stacked circles to identify trademarks on everything from fruits and vegetables to dairy products to cleaning items. And a stroll through a renovated Stop & Shop store in Windsor, Conn., shows all kinds of clever activations of the new iconography to push along its fresh new message: the circles rendered as a sliced tomato atop a sliced mango; as a pepperoni and a lime; as a top view of two glasses of beer, and so on. 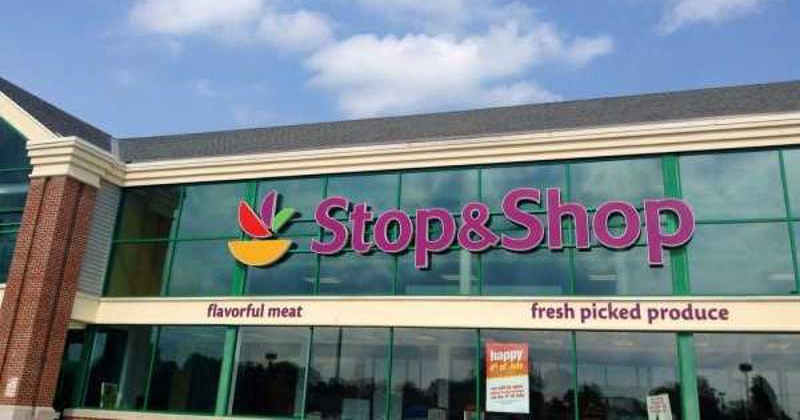 I get to thinking about the Stop & Shop brand more often than most. I’ve long followed its fortunes as a business, and I’ve shopped one for my family for years—though not every week. Oftentimes, I’ve been in correspondence with counterparts in Europe who are curious about Stop & Shop. They ask me: Why does Ahold Delhaize’s largest banner, in its largest market, appear to struggle so much?

It’s a tricky question to answer because it’s not as though you’d describe Stop & Shop as a "struggling retailer": It’s got strong volumes, good locations and large, if slightly sliding, market shares. It generally has been on top of or in front of most of the food megatrends, from private label to e-commerce. Its stores are clean, well-stocked and dependable. And despite very slow growth, margins have held up.

That said, inasmuch as the wedge represented Stop & Shop’s identity over the past decade, it’s about time it got the shock of a good hard yank on the waistband—yes, a wedgie for the wedge. And may the dependable-but-boring Stop & Shop of the Wedge Era change its shorts along with it.

Stop & Shop stores have gotten attention to areas such as bakery, produce and pricing under Ahold’s “Project Thunder” initiative over recent years. But those changes were enacted so gradually and spread so thinly that the brands never really came along for the ride. Behind the bright wedge logo, Stop & Shop’s stores came off just a little too plain vanilla and “samey.” Clean, reliable and dependable, yes, but remarkably unexciting—and perhaps a little inauthentic.

Officials acknowledge that for all the things Stop & Shop had done right over the years, it had fallen behind on the change in how customers tended to eat today, not offering them enough prepared foods, local offerings and convenient options—changes that are coming along with the new logo and what customers have been asking for. It’s the hope that these can bolster Stop & Shop’s foundational strengths and start to make Stop & Shop a place where people want to shop and not just where they wind up shopping. That will gain back some share of stomach it was losing to restaurants, delivery companies and supermarket competitors with more flair and more options.

A market-by-market rebranding should provide efficiency in marketing and advertising to get the word out about the but the real change is on focusing local marketing and merchandising energy behind the brand. That’s the new signal here.