This year’s November-December sales performance paled in comparison to the 2021 period, when holiday sales surged 13.5% year over year to $889.3 billion—“shattering previous records,” according to NRF. The federation noted that holiday retail sales have averaged 4.9% annual growth over the past 10 years, and pandemic spending has driven “considerable gains” in recent years.

“We knew it could be touch-and-go for final holiday sales, given early shopping in October that likely pulled some sales forward plus price pressures and cold, stormy weather,” NRF Chief Economist Jack Kleinhenz said in a statement. “The pace of spending was choppy, and consumers may have pulled back more than we had hoped. But these numbers show that they navigated a challenging, inflation-driven environment reasonably well. The bottom line is that consumers are still engaged and shopping, despite everything happening around them.” 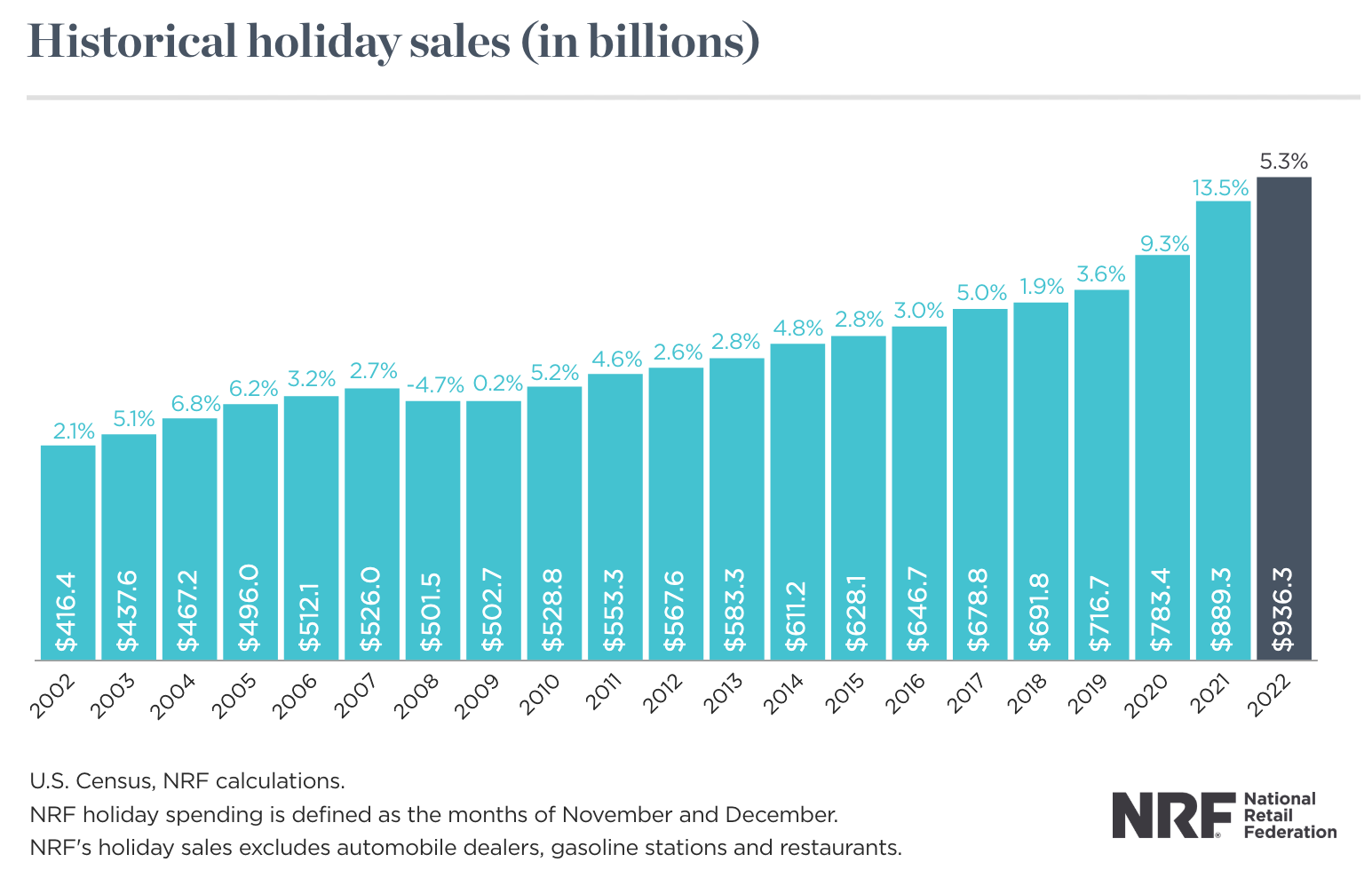 “The last two years of retail sales have been unprecedented, and no one ever thought it was sustainable,” said NRF President and CEO Matthew Shay. “Nonetheless, we closed out 2022 with impressive annual retail sales and a respectable holiday season, despite historic levels of inflation and interest rate hikes to cool the economy.”

For December, NRF reported a 0.6% (seasonally adjusted) month-over-month dip in retail sales yet a 5% gain (unadjusted) year over year, following a 0.5% sequential decrease in November—after a surge of early holiday shopping in October—and a 5.6% 12-month gain. NRF said its sales numbers were up 5.6% on a three-month moving average through December.

Holiday sales for the November-December span rose year over year in seven of nine retail categories. Online and other non-store sales led with a 9.5% uptick, followed by increases of 7.8% for grocery and beverage stores, 3.8% for general merchandise stores (including department stores), 2.8% for health and personal care stores (including drug stores), 2.2% for apparel and accessories stores, and 1.5% for building materials and garden supply stores. Decliners for the period were electronics and appliance stores, down 5.7% annually, and furniture and home furnishings stores, down 1.1%.

“Consumers shopped in record numbers, and retailers delivered positive holiday experiences to inflation-wary consumers, offering great products at more promotional price levels to fit their stretched budgets,” Shay added. “The fact that we saw retail sales growth on top of December’s 14% gain in 2022 shows the resilience of consumers and the creativity of retailers in driving consumption and economic activity while addressing high inflation and continued cost pressures.”

The state of the current economy remains a “jigsaw puzzle” that doesn’t yet fit together into a clear picture, according to Kleinhenz. The housing market has soured, small businesses remain wary, the manufacturing sector has contracted, inflation has stayed high but relaxed and the Federal Reserve has hiked interest rates. On the other hand, he noted, retail sales have been solid, consumer spending and confidence have remained strong, and the unemployment rate remains at historic lows, he noted.

“And we're gonna be finishing up a picture of the 2022 economy in a couple of weeks, when GDP for the fourth quarter comes out,” Kleinhenz said in the panel discussion. “2022 was real surprising in many ways. The first and second quarters were negative, but we came in with surprisingly good performance in the third. And I expect a reasonable performance for the fourth quarter.”

While recessions are part of the normal economic cycle, Kleinhenz said he doesn’t expect one currently.

“What about a recession? Well, I can tell you, we’ll have a recession. The question is, when will it be? Next year? Business cycles repeat themselves. Recession is normal. It’s a part of the economic fabric. At this point, I am not in a position to believe that we are in a recession, and I'm hoping that we could get through this year without being disappointed.” 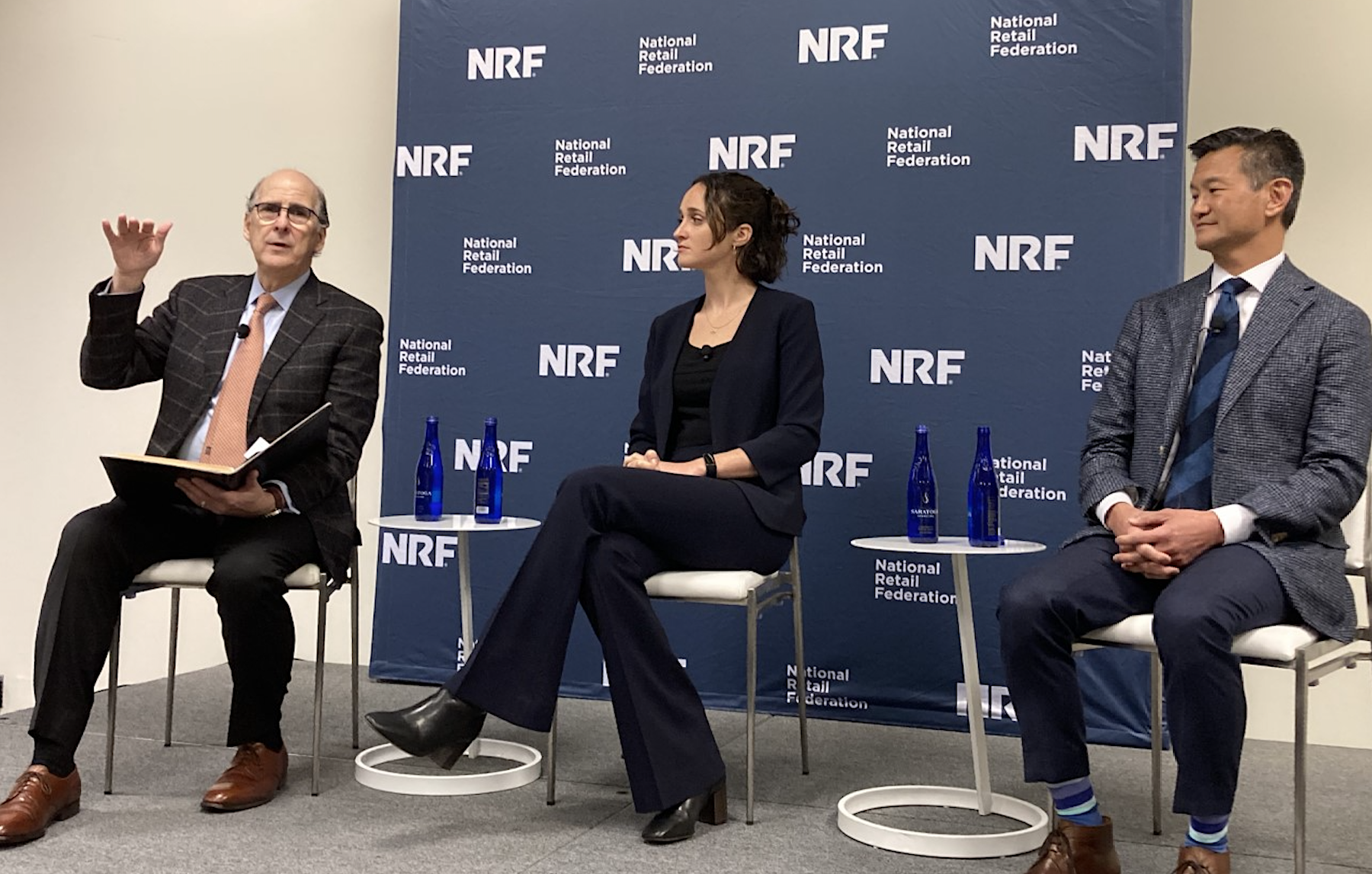 The yield curve for U.S. Treasuries has been inverted since November—considered by many a red flag for an upcoming recession—yet the San Francisco Federal Reserve Bank, using the unemployment rate as an indicator, finds that it doesn’t signal a recession at the present time, Kleinhenz said.

“So no matter what the scenario is, I think it will be a challenging 2023. I do expect a meaningful slowdown,” he added. “I am still constructive about the consumer. There still remains a significant amount of cash out there in checking accounts.”

Wolfe said Morgan Stanley sees the U.S. economy ending 2022 “definitely on a stronger note than expected”—tracking about 3% GDP growth for the fourth quarter—but noted that “it’s undeniable that growth is going to slow down this year.”

“We’re definitely in for a year of slower growth. We do not forecast a recession in our outlook, but we do have growth slowing to about 0.3% in 2023,” she explained. “That’s a very painful year and well below potential, which is about 1.7% growth, and definitely slower than some of the very strong growth we’ve seen over the last two years. Within that, there are going to be pockets of the economy that fuel recessionary [activity].”

Meanwhile, KPMG predicts a recession coming sooner rather than later in 2023, according to Kim.

“We believe the U.S. economy will enter a recession in the first half of 2023. A lot of the points that Sarah [Wolfe] made, we just think are going to be weaker,” he said.

Kim pointed to the current inverted yield curve. “You can see how upside down the yield curve is, and that’s an anomaly,” he said.

“If you go back to 1962, there have been nine inversions in the yield curve. Anybody want to take a guess on how many recessions we’ve had in the U.S. economy?” he asked attendees. “Eight times. So a much better track record than the stock market [as a recession indicator].”

Still, survey data so far indicate an improved second half for 2023, Kim added. “For the second half, we do expect a recovery,” he said. “Philadelphia Fed President Patrick Parker commented that sometimes the hard data doesn’t tell you the full story and, at times, it’s important to look at soft data, which is survey data. The importance of survey data is it captures changes in sentiment much more quickly than the official [economic] statistics.”