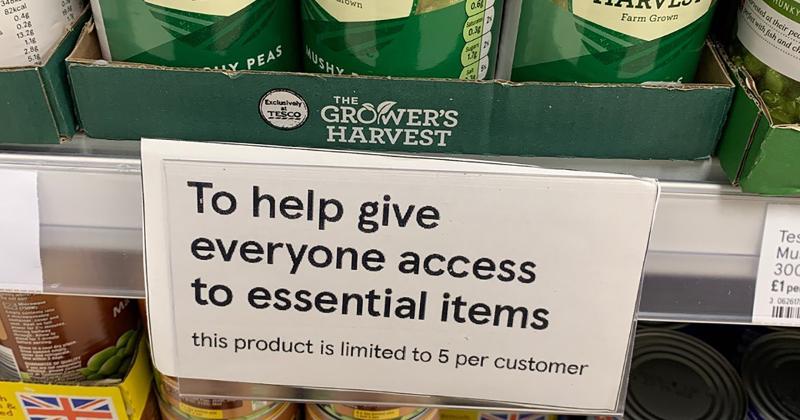 Coronavirus has become the only time where I’m not taking pictures of shelf gaps in stores.

At Grocery Insight, we visit a large number of stores every week to report back to our clients with suggestions alongside information on wider market activity.

It’s just as a customer would visit, in a standard capacity. And other than peak times, such as Christmas, it’s a pretty standardized trade pattern: You can get around stores, unobstructed.

But that has changed over the past two weeks with trade ramped up beyond Christmas levels and for a prolonged time too.

Stories of stores being up by 50% on their comparative sales figures are unsurprising given the trade levels, and there is no sign of a slowdown at all.

Indeed, the U.K. market has been seeing a massive rise in sales at discounters (Aldi and Lidl) for 10 years now, since the last great recession. Convenience chains (smaller formats of less than 3,500 square feet) perform well, with customers buying their fresh foods “little and often” to minimize waste and maximize their budgets.

The market has taken a giant “reverse swing” in the past three weeks, and big-box stores are back in fashion. Discounters have suffered from out-of-stocks, with bigger stores overrun by customers wanting to buy as much as possible.

So, the coronavirus is now in Europe and the U.K. too, despite thoughts that we were safe and would escape the worst.

We have seen government policy changing overnight ahead of the prospect of some form of “lockdown,” perhaps later this week.

For shoppers, they started their buying some 10 or so days back, with toilet paper rolls the choice product for every customer.

Store visits last Sunday saw almost every customer carrying a pack of toilet paper, with little notable uplifts in other areas, save for sanitizing hand wash, which has also flown off the shelves.

The ironic thing is that with any “lockdown,” like the one that has been seen in other European countries, supermarkets and pharmacies are allowed to stay open.

So why panic buy?

Perhaps there’s a genuine fear that homes could be locked down, so these customers would be unable to leave their homes.

On March 15, we saw a joint newspaper advertisement by all our supermarkets saying not to panic buy and that there is enough stock around the stores and distribution centers for everyone.

This was a smart move—and it was the retailers who seemingly organized this as government and industry bodies have done very little to resolve anything.

The media continued to joke about matters alongside showing videos of stores’ empty shelves—no message of calm and no thought for store colleagues already worried about the coronavirus and themselves, having to fight customers trying to buy more toilet paper than was permitted.

Showing video and imagery of empty shelves makes for “news” and is undoubtedly topical. However, it’s akin to a “run on the bank.” Social media is fueling the panic, with retailers caught in the middle, having to manage everything at once.

In terms of resupply and restocking, things will pick up as the colossal trade level settles down.

A Slowdown to Come

I am still finding it hard to believe that customers are still buying at the levels they are; they are bringing spending forward from other months, no doubt. But there is little sense that this is a “boon time” for food retailers.

When spending is brought forward in an extreme situation, there will be a slowdown to contend with later in the year once things return to normal. Not to mention the inevitable downturn, recession and what that will do to consumer confidence for the rest of 2020 and beyond.

However, as we focus on the day to day, there is stock around the country but record sales to catch up to. There are only so many trucks to get on the road, and the suppliers are flat out too, trying to meet orders that are placed upon them.

In terms of retailers, more comprehensive bulk buying limits have been implemented by retailers such as Aldi, with its "no more than four of any one item" rule, and selected products have been limited per customer, such as toilet paper.

For the other U.K. retailers, for the time being, a mass “bulk buy” policy has not been enacted, but specific categories are seeing restrictions due to the uplifts encountered.

These categories are generally stable, with very little change, save for seasonal events that are obviously planned for as they’re known about each year.

As we look to the U.S. and the reaction from the retailers there, in the U.K., there has been no reduction in opening hours by retailers or reduction in service levels, despite that being an entirely logical thing to do.

Delivery restrictions, where stores are unable to receive deliveries overnight ordinarily, due to their proximity to residential areas (for example), have been relaxed.

Wegmans closing their Pub restaurants and cutting food production in-store, alongside Publix and H-E-B, also seems sensible, but we have yet to see similar moves in the U.K., yet.

It will get harder before it gets easier, particularly for you, our American cousins, given the transport times for logistics alone, but retail will get through it, it always does.

To all those involved in serving the customer at this difficult, if not unprecedented, time, thank you.

Steve Dresser is director of Grocery Insight, an advisory, insight and intelligence service for food retailers based in Harrogate, U.K. He can be reached via email or on Twitter.