One in three Instacart customers have purchased a plant-based meat or milk product, according to company sales data, signifying that “plant-based food has grown from a niche category into a grocery staple over the past two years," said Laurentia Romaniuk, trends expert and senior product manager for Instacart.

Instacart, which recently added two new executives to lead international expansion, released its Plant Power report, in which Instacart analysts looked to search and purchase data to explore meat and milk alternatives’ journey into the mainstream—a journey fueled by the pandemic as consumers focused on living healthier lives.

“Searches for terms like ‘plant -based,’ ‘meatless,’ ‘vegetarian’ and especially ‘vegan’ took off on Instacart as consumers looked for healthy at-home meals during 2020 lockdowns,” Romaniuk said in a release. “And this trend is turning into a long-term lifestyle—search popularity has been growing even more in 2021.”

A recent Instacart survey conducted Feb. 25-March 1 by The Harris Poll confirms this: When asked about the grocery and food habits adopted during the COVID-19 pandemic that they’ll keep, 30% of the 2,038 U.S. adults surveyed said they plan to continue eating healthier by preparing lighter, plant-based meals.

Of particular popularity are grill-friendly "faux meats," which saw 42% year-over-year sales growth on Instacart in 2020, and plant-based milk alternatives, of which adoption rates increased by 27% throughout 2020. Interestingly, nearly half (43%) of Instacart’s customers who buy plant-based meat also buy conventional meat.

Growing in popularity among meat alternatives is jackfruit, which Instacart notes costumer adoption of grew at a 50% faster clip in 2020. "We expect consumers will diversify their summer grills with more plant proteins this year," Romaniuk said. "If jackfruit adoption rates continue to grow at the rate they did during the pandemic, a lot more consumers will be pairing pulled jackfruit with their vegan sausages and plant-based burgers this barbecue season." 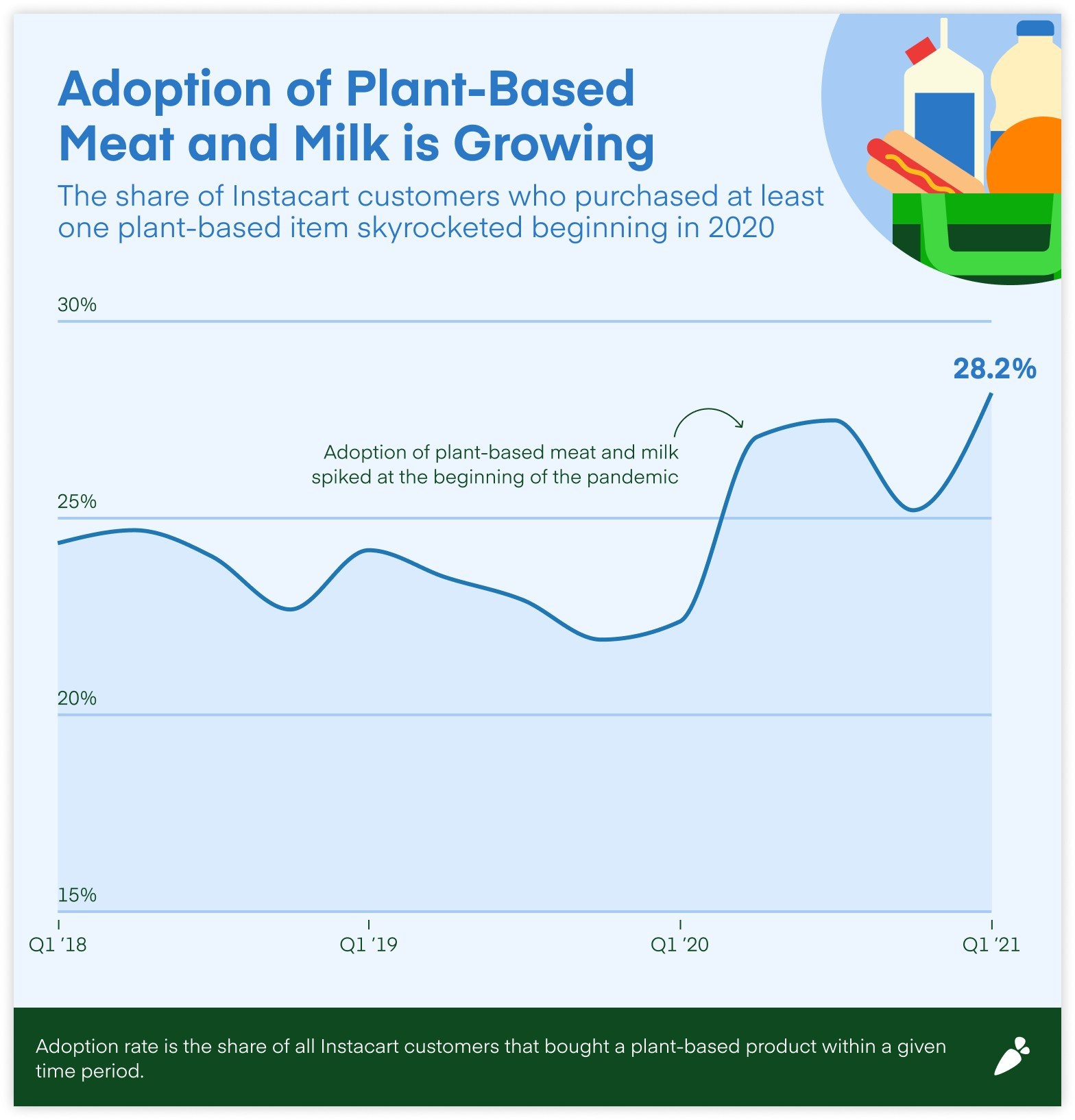 Of the milk alternatives, Instacart found that almond milk dominates in terms of sales on its marketplace and that it is the product that first-time plant-based customers reach for the most.

That said, a growing list of milk alternatives is challenging almond milk’s lead, dependent on region. Instacart reports that in the West and Southeast, consumers buy more pea milk than the national average, whereas coconut milk stands out in the Pacific Northwest, and oat milk trends in the Northeast. In the Midwest, Mid-Atlantic, and part of the South, consumers are buying more soy milk and almond milk. 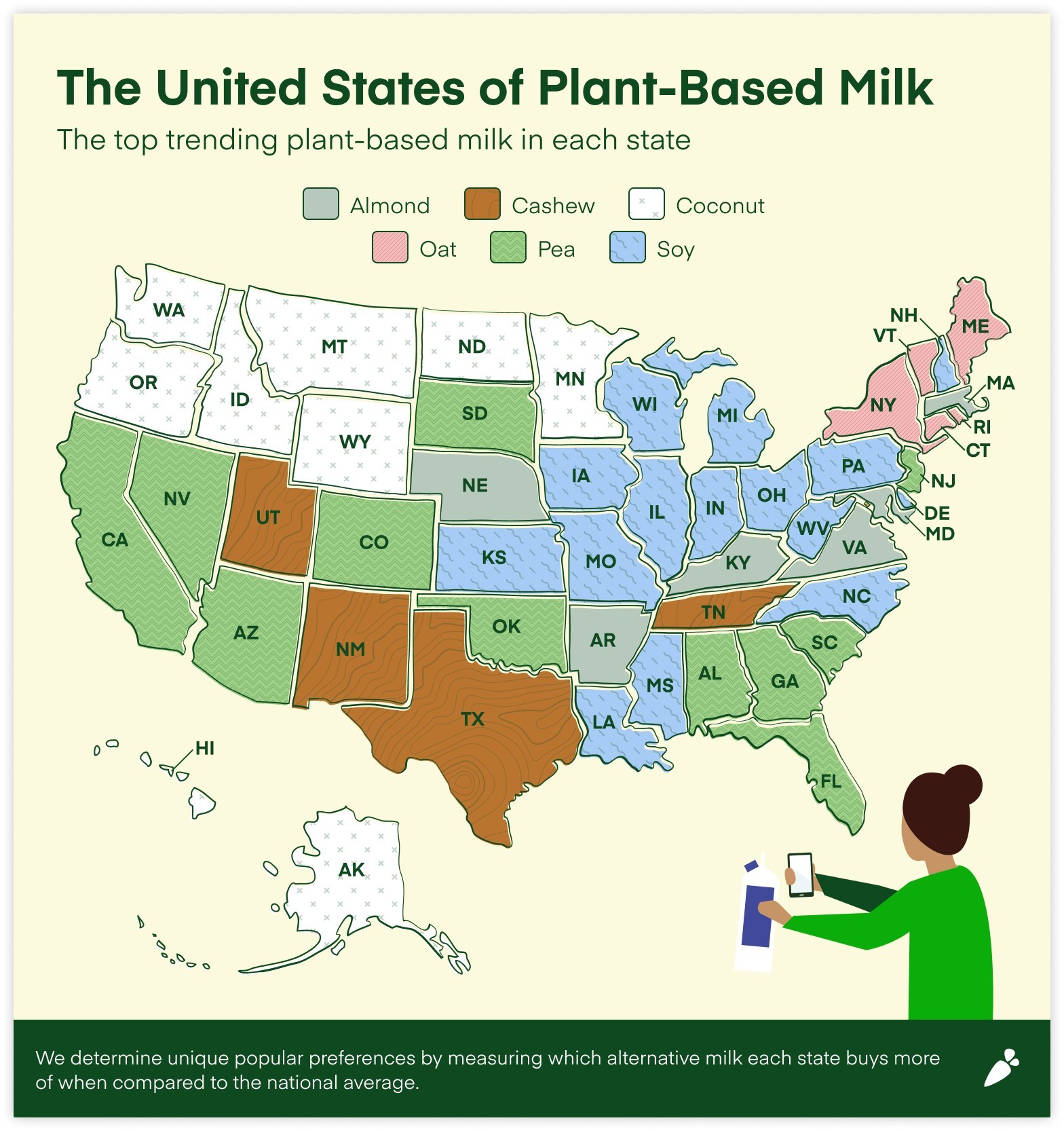 In general, plant-based purchasing is growing fastest in the South and East: Consumers living in western metros such as Portland, the San Francisco Bay Area, Los Angeles and Seattle buy the most plant-based meat and milk products by volume, according to the Instacart report.

Instacart, whose delivery service is available to more than 85% of U.S. households and 70% of Canadian households, has added two executives to lead international expansion, as well as development of new verticals intended to support partnering retailers.

David McIntosh has joined the San Francisco-based company as its new VP of product, retailer. In this role, McIntosh will lead Instacart’s retailer group focused on developing Instacart marketplace and enterprise services, as well as new verticals the company said would further support the e-commerce needs of retailers.

Prior to joining Instacart, McIntosh was the founder and CEO of Tenor, a GIF search engine and keyboard app acquired by Google in 2018. Before Tenor and while attending University of California at Berkeley, McIntosh founded Redux, which was acquired by CrunchyRoll.

Instacart also said this week that Nikila Srinivasan has been appointed VP of product, international and will lead a long-term strategy to grow the company to new markets abroad.

Srinivasan comes to Instacart from Facebook, where she spent more than seven years focused on small and medium businesses, advertiser growth and creating product experiences for businesses in emerging markets. At Facebook, she was responsible for growing the platform to 180 million small businesses and 10 million advertisers. She was also part of a team responsible for building and scaling two international locations in London and Asia-Pacific.

Most recently at Facebook, she was senior director and head of consumer product for communities, where she led key product lines such as Facebook Groups, Events and Dating. Prior to Facebook, she spent time at startups including in India.

Both new hires join a growing product team at Instacart, which in March added Max Eulenstein as VP of product, Instacart App. In his role, Eulenstein is focused on developing consumer-facing marketplace app and services. Eulenstein previously spent nearly 10 years at Facebook, where he focused on product management. Most recently, he was the senior director of product for Instagram Community.

Instacart recently said its goal was to increase corporate headcount by 50% this year as it moves to solidify its leadership in e-grocery and reportedly prepares for an initial public offering.