Continue to Site >>>
Edit
Photograph courtesy of Beyond Meat

U.S. retail sales of plant-based foods have grown 11% in the past year, bringing the total plant-based market value to $4.5 billion, according to the latest data from the San Francisco-based Plant Based Foods Association (PBFA) and Washington, D.C.-based The Good Food Institute. The total U.S. retail food market grew just 2% in dollar sales during this same period. In the four months from April 2019 to July 2019, total sales of plant-based food increased a whopping 31%.

“With rapid innovation in the plant-based food industry and consumer demand for retail and restaurant plant-based foods on the rise, the most important trend in 2020 will be ‘more,’ ” says Michael Robbins, communications consultant for the PBFA. “More foods launched, more brands expanding, more investment into the industry and more sales by consumers.”

As the quality, flavor and mouthfeel of plant-based alternatives reaches a tasty tipping point—where consumers can’t tell the alternative from the original—plant-based milks; plant-based dairy, including cheese, yogurt and ice cream; and plant-based meats have become the leading sales drivers in the plant-based sector.

From Alternative to Specialty

The evolution of plant-based foods from satisfactory alternative to sought-after specialty has sparked growth across a broad range of categories, from snacks and drinks to cheeses and desserts.

“Our membership continues to grow within this explosive product category,” says Phil Kafarakis, president of the Specialty Food Association (SFA) in New York. “[Apart from] the meat craze currently, which is extremely diverse in nature when you consider products that were once labeled ‘vegetarian’ are now repositioning themselves, most of the innovation that is coming to market is within dairy—yogurts, probiotic extensions, etc.—and wellness snacks.” Kafarakis also sees heightened interest in specialty plant-based confections and beverages.

“These categories have become mainstream with core products that have consumer [acceptance]—think soy milk, almond milk, etc.—and are perfect for extensions and adjacent products that are plant-based,” Kafarakis says. Because the target consumer for plant-based foods is willing to experiment, “companies that are not too far from the core will get trial and repeat faster than pioneering a new category within the store.”

As grocery chains expand their plant-based product assortment into national plan-o-grams, says Kafarakis, the category is gaining further traction with a broad spectrum of shoppers across the country.

“The success of the merchandising is being built off the core products that have proven their ability to sell,” he says. “Dairy is the best example. Soy milk was an anchor for all soy-based products within the category, not just the milk section.”

Retailers such as Kroger, Albertsons, H-E-B and Target are expanding their plant-based offerings with gusto, with some even debuting plant-based store brands.

“Kroger anticipates interest in plant-based products to continue to grow in 2020, with the category being one of the key drivers of our natural and organic sales,” said Joe Grieshaber, Kroger’s SVP of merchandising, in a statement.

Meanwhile, Boise, Idaho-based Albertsons Cos. revamped its own brands of frozen entrees to include 55 new USDA-certified organic and Certified Plant Based high-protein power bowls and more. With the rollout in September 2019, Albertsons became the first retailer to certify its private label products based on PBFA certification. Each frozen entree bears the Certified Plant Based seal.

Target’s Specialty Diets section online calls out foods that are ketogenic, gluten-free, vegan, vegetarian and more. The Minneapolis-based retailer encourages its online shoppers to “Find a Diet to Fit Your Lifestyle,” allowing them to select from a variety of subcategories including produce, proteins, pantry products, nondairy alternatives, frozen meals and entrees, and snacks.

As consumers of all dietary persuasions increasingly incorporate plant-based products in their daily food consumption, grocers are making way for the merchandising of alternative products alongside traditional counterparts and stepping up promotional efforts to drive trial and repeat purchases.

Heath, Ohio-based Good Catch’s Plant Based Tuna is “strategically positioned in the seafood sections of the supermarket, whether the shelf-stable tuna aisle or elsewhere,” says CEO Chris Kerr. “We believe plant-based seafood can be a one-to-one alternative to current offerings, as it provides the same healthy benefits of seafood without harm to the environment.” Good Catch is expanding its portfolio with a line of frozen plant-based entrees and appetizers this June.

Meanwhile, Beyond Meat of Los Angeles has “pioneered selling plant-based meat in the meat case, a strategy from which we’ve found great success,” the company says. “As we’re looking to reach meat lovers, we sell where they’re already shopping for their protein, in the meat aisle.”

The Beyond Burger is available in the meat case at national chains such as Target, Walmart, Kroger, Publix, Safeway and Whole Foods, as well as at thousands of grocery stores globally. Worldwide, Beyond Meat’s portfolio of fresh and frozen plant-based meats is available in more than 50 countries at more than 63,000 retail and foodservice locations.

Sprouts Farmers Market of Phoenix has been particularly successful with Ripple products. “In addition to having a robust array of new and innovative vegan products on their shelves, they carry our full line of products, which meets the full customer demand and creates a one-stop shopping experience,” says Grabowski. “They also run discounts at promotional periods across our entire product portfolio, which allows customers to explore new Ripple products while still getting a great deal on their tried-and-true Ripple favorites.” 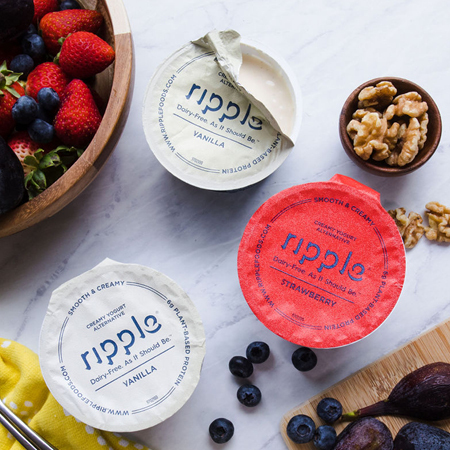 Kroger has successfully driven sales of Quorn meat substitute products by employing a number of merchandising tactics, including featuring new products via shelf blades in the frozen section; offering coupons at checkout to encourage consumers to try Quorn the next time they shop; in-store sampling/demonstrations; and promoting the products in its magazines and in-store programs.