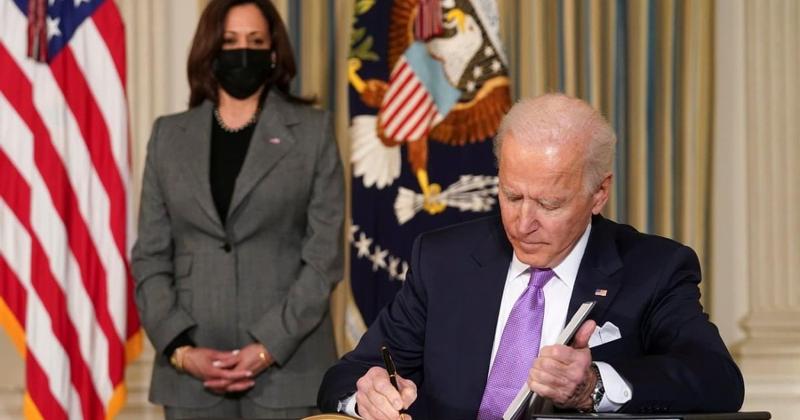 Chaired by VP Kamala Harris and vice chaired by Labor Sec. Marty Walsh, the White House Task Force on Worker Organizing and Empowerment will include more than 20 cabinet members and heads of other federal agencies who will look for ways to make it easier for workers, including marginalized workers such as women and people of color, in areas of the country with restrictive labor laws, as well as in industries in which it is harder to organize.

Retail businesses have traditionally been keenly sensitive to changing interpretations of the National Labor Relations Act. Some but not all supermarket retailers currently have unionized workforces.

The executive order directs the task force to make a set of recommendations within 180 days on two issues: first, how existing policies, programs and practices can be used to promote worker organizing and collective bargaining in the federal government; and second, where new policies are needed to achieve the task force’s mission and what associated regulatory and statutory changes are needed.

“In the past few decades, the federal government has not used its full authority to promote and implement this policy of support for workers organizing unions and bargaining collectively with their employers,” the executive order read, referring to the National Labor Relations Act. “During this period, economic change in the United States and globally, technological developments, and the failure to modernize federal organizing and labor-management relations laws to respond appropriately to the reality found in American workplaces, have made worker organizing exceedingly difficult.”

Biden and Harris said they have long championed workers’ rights, with the president saying America was built by the middle class and that unions built the middle class. According to a White House fact sheet, 16 million workers in the U.S. are union members or in a job that provides them union representation, and more than 6 in 10 of those workers are women and/or people of color. It goes on to say that nearly 60 million workers today would join a union if given the chance.

The fact sheet states Biden and Harris believe the decline of union membership—in 2020, union members made up 10.8% of the U.S. workforce, down from more than 30% in the 1950s—is contributing to societal and economic problems in our country.

The National Grocers Association, in response to a request for comment, said it supports a free and open workplace that it said “helps to drive job creation and economic growth.”

“Independent grocers know their employees are their most valuable resource. Our members work hard to train and retain their associates by creating opportunities within the workplace,” Jim Dudlicek, director of communications and external affairs for the Washington, D.C.-based association, told WGB. “NGA supports a transparent and open workplace that protects employees’ privacy rights and supports the employer-employee relationship.”

Amazon recently found itself in the middle of a unionization battle that garnered global attention. Following reports of unsatisfactory working conditions at its fulfillment center in Bessemer, Ala., employees voted in late March on whether to unionize. There were not enough votes to move forward with unionization, but the Retail, Wholesale and Department Store Union is requesting a hearing be scheduled to determine if the results of the election should be set aside based on claims Amazon interfered with the vote.

Prior to the vote, Joe Biden made an address via YouTube on Feb. 28 to declare his administration’s support of workers’ rights to organize; the address, which referenced the workers in Alabama, did not mention “Amazon” specifically.