In another signal of the wage pressures that a tight labor market is exerting on food retailers, Publix Super Markets is increasing its pay rates for the third time this year, according to a memo sent to the chain’s employees acquired by WGB. 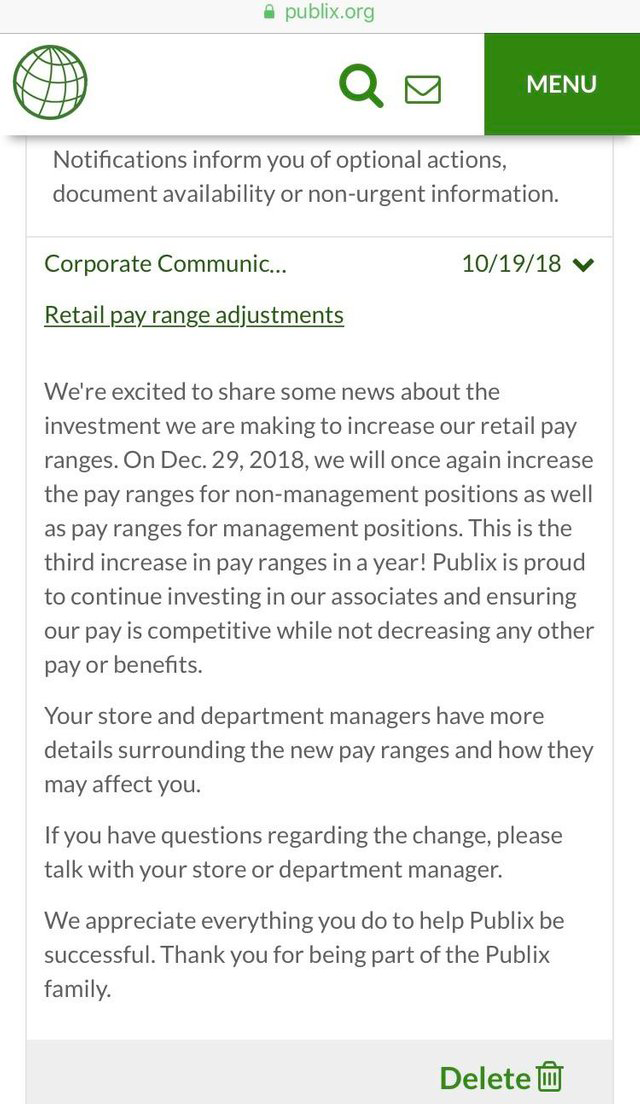 A spokeswoman for the Lakeland, Fla.-based company acknowledged the message, which was sent to workers on Oct. 19, but did not disclose the magnitude of the pay scale raises, which cover both management and nonmanagement positions. The new rates will go into effect Dec. 28.

“This is the third increase in our pay ranges in a year!” the memo said in part. “Publix is proud to continue investing in our associates and ensuring our pay is competitive while not decreasing any other pay or benefits.”

The change was announced a little more than two weeks after Amazon, parent of Whole Foods Market, said it was raising its minimum hourly rate to $15 per hour for all of its employees. Amazon’s announcement came on the heels of political pressures, including a bill from Sen. Bernie Sanders that contemplated taxing large employers like Amazon and Walmart to help pay for their employees receiving government subsidies such as food stamps, Medicaid and public housing assistance, but also leapfrogged a number of competitors who themselves have found hiring more difficult as unemployment figures drop.

In the case of Publix, its appetite for growth and dedication to maintaining a high-service offering appears to have magnified its need to attract and retain employees. The retailer in its annual report in March said it had 44 store projects under construction and a $1.5 billion capital budget primarily for new stores, but it has also made several opportunistic acquisitions this year of former Winn-Dixie, Bi-Lo and Safeway stores. It has opened 13 new supermarkets and one new GreenWise natural and organic store since Aug. 9, including its newest Publix location opening Oct. 24 in Madison, Ala.

“Here in Florida, there is significant pressure on wages,” Mark Heckman, a Bradenton, Fla.-based industry consultant, told WGB in an email. “The economy is roaring and competition in the travel and resort industries here always put a strain on finding good people. Unlike many stagnant growth markets, Publix is even building new stores in futuristic sites, willing to pioneer these sites to keep competitors out.”

Heckman noted that in Florida, Publix hires a significant number of social security recipients who are restricted in terms of how much they make before being penalized. The strategy keeps the stores well-staffed and somewhat mitigates the wage pressure a bit. “To that end, I continue to see more store associates in their stores than even their high-end competitors such as Fresh Market, Whole Foods and Earth Fare. Checkouts remain well-staffed with baggers and wait times are minimized for shoppers.”