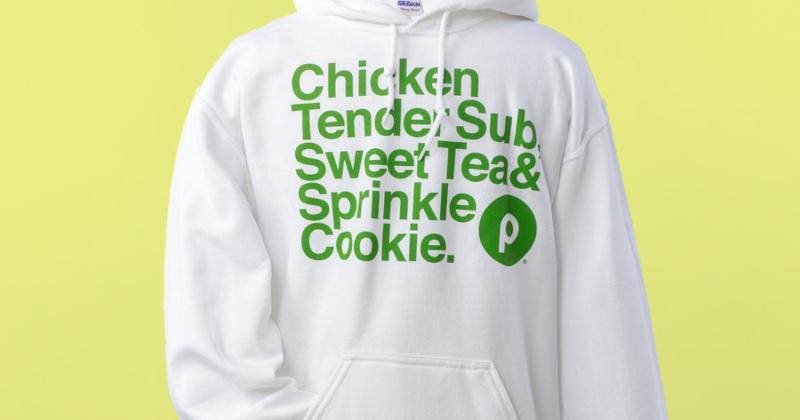 He’s a hero in social media—and he’s no chicken.

The Florida entrepreneur behind the popular social media accounts devoted to the phenomenon of submarine sandwiches from Publix says he will continue to answer the question his accounts pose, despite having twice run into a “deli-cate” legal grinder with the grocer.

“They’re keeping grips on me, but they’re not playing very nice,” Dickey said of the Florida grocery giant in the wake of a second cease-and-desist order he said he had received from Publix related to activity around a Twitter account @PubSubs_on_sale, which alerts its 40,000 followers to whether the popular sandwiches are discounted on a given week.

The flap—which Dickey said related not to the account itself but to the prospect of him potentially monetizing its sizable audience—was first reported this week by Fresh Take Florida, a news service of the University of Florida College of Journalism and Communications, and subsequently picked up by the Associated Press.

In the interview, Dickey explained that the Lakeland, Fla.-based grocer had first objected to his account last August when he’d begun to market T-shirts and other merchandise playing off the popularity of the sandwiches. Although he subsequently shut that business down, the most recent cease-and-desist order came earlier this year after Dickey—whose day job is working at an Orlando-based text-messaging firm—pursued a plan to convert his audience to a paid tier who’d receive the information via text messages for $2 a month. Around 3,800 people had signed up before it was discontinued.

That order, according to Dickey, alleged that he was in violation of Section 43(a) of the Lanham Act, a federal statute governing trademarks, service marks and unfair competition. Dickey said legal pressure from the grocer caused him last month to inform followers that the account may shut down. But after seven weeks of social-media silence—and subsequent reporting by Fresh Take revealing the nature of the dispute for the first time—the account came back to life this week. “Thank you” it said inside of a heart made of emoji sub-sandwich rolls. A threaded reply read: “btw… Yes. Publix Chicken Tender subs are $6.99 (4/29-5/5),” and included the gif of President Barack Obama’s “mic drop.”

Publix has not responded to WGB’s request for comment.

For the supermarket industry, the chicken tender dispute raises timely questions around the fraught nature of viral social media—demonstrating at once its potential influence and its diabolical drawbacks—while shining a light on multiple trends the industry is also grappling with, including the importance of establishing signature food and foodservice offerings; online brand reputation and awareness; the power of promoted prices; and the potential of monetizing audiences in the form of digital subscriptions and adjacent merchandise.

In Dickey’s estimation, his account tapped into the potential of Publix sandwiches as a competitive differentiator and in fact, is responsible at some level for having made them an envy of the industry and every Subway franchisees’ worst nightmare.

On his personal social media account, and in a presentation he shared with WGB, Dickey has documented how Google keyword search volume for the term “Publix subs” exploded in the wake of establishing the account in January 2017. 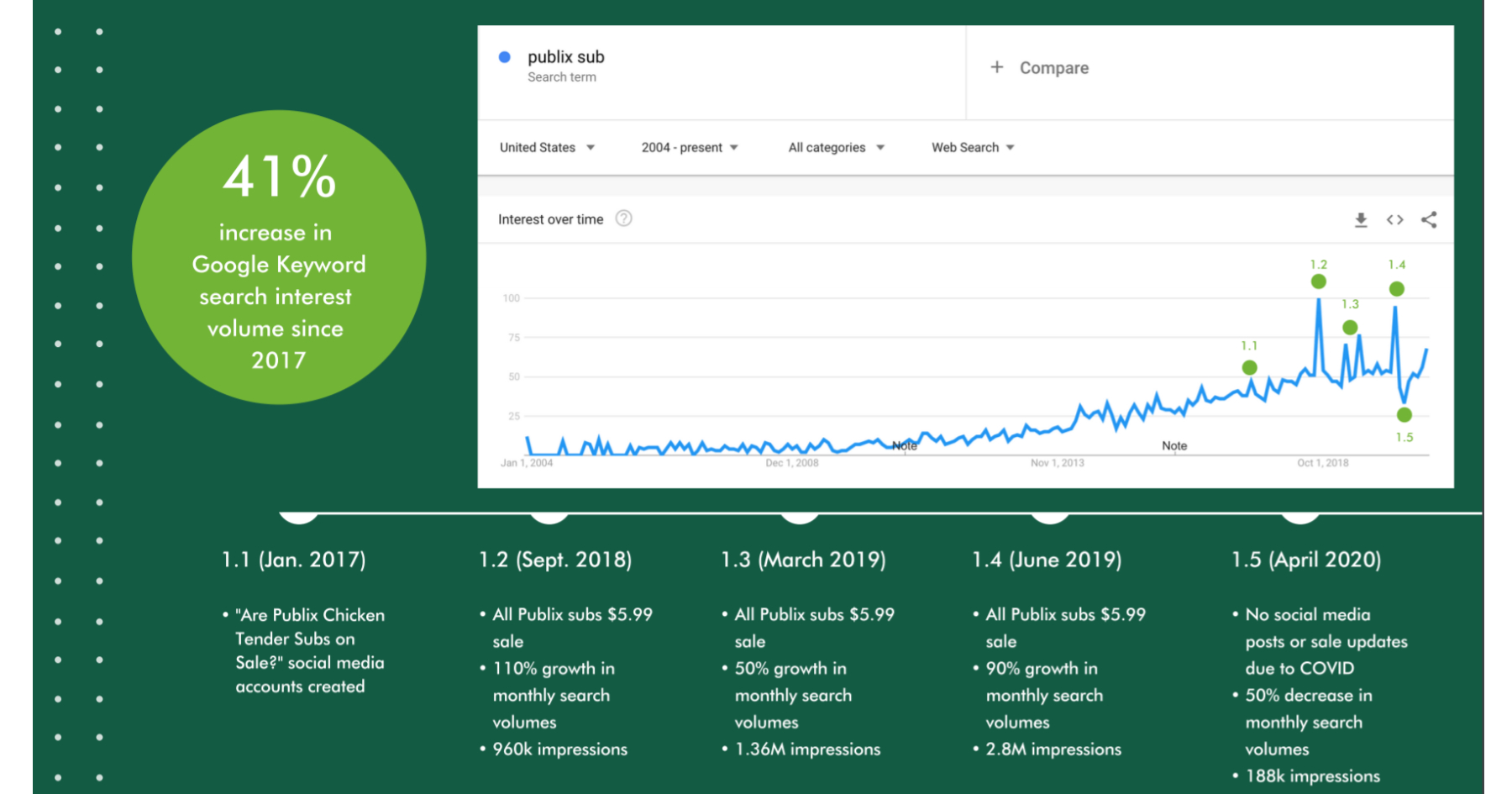 Testimonials from grateful subscribers number in the thousands.

If anybody is wondering, yes, a solid 80% of why I ever go on Twitter is to check @PubSubs_on_sale to see if I can get my chicken tender sub for $5.99 or nah

Dickey said the Publix account grew as an offshoot from a separate Twitter project he’d previously run with a friend called “Things Floridans Like.” Publix—and in particular, its Chicken Tender Sub sandwiches—was a topic that account’s audience frequently demonstrated a particularly strong response to. In the wake of the hotly contested 2016 presidential election and what he sensed as increasing side-taking and ugliness on the internet, the time was right to highlight something everyone could agree on and feel good about.

“I was tweeting about Publix a lot at that time, and the account grew to like 800,000 followers. And I realized that people love Publix—and they love Publix subs. And I realized every time we shared something, there was a lot of connection between people in the comments. There was a lot of positivity shared, and that was something that I enjoyed. It wasn’t people arguing about politics. It wasn’t people arguing about race, religion, whatever. So in 2017, I recognized that there was an opportunity to create an account just around Publix subs. I figured, if I could tell people when Publix subs are on sale, I’ll probably make them happy, and then people will share it online.”

The work of obtaining the information, sharing it, and then engaging with the reactions it generates is what makes the account a success, Dickey says. He describes having “arbitraged” Publix’s own communication to its shoppers: Every Thursday at the stroke of midnight, he receives Publix’s weekly sales flyer by email (in certain Publix marketing areas, he notes, this email goes out a day earlier and he adjusts for that, and there was at least one occasion where he was tipped off by an employee ahead of Publix’s own release and subsequently shared that).

“I know exactly where to go in the weekly ad. I know how to gather that information. I know how to package it up consistently to share with my audience,” Dickey says. And until last month, Dickey never missed a week.

Publix for its part appears awakened to the power of leveraging its positive reputation in the digital space. A year ago, it launched a digital loyalty program called Club Publix that among other perks, gives subscribers early notice of upcoming sales. And late last year, an online company store opened, selling everything from branded slide-on sandals and COVID masks to a variety of sub-sandwich apparel like T-shirts, pajamas and hoodies. (Dickey’s own launched and abandoned merchandise included a mask that read “insert sub here,” he says).

One T-shirt for sale at the Publix store is a graphic representation of the term #PUBSUB, a hashtag that ironically, was once used primarily by software developers as a shorthand reference to “Publish-subscribe pattern” in messaging applications but around a decade ago, became increasingly used by enthusiasts of Publix sandwiches. The earliest reference WGB found to Publix Chicken Tender subs in a rudimentary Twitter search dates to 2008.

By tapping specifically into customer affection for subs, Dickey says he has created the kind of an audience that big companies that reach millions and promote a much larger assortment like Publix can easily overlook. “The thing is,” he says, “is that customers don’t care about what beef patties are on sale and what vegetables are on BOGO. They care about what Publix subs are on sale and that’s why they follow my accounts. Publix just hasn’t picked up that that’s valuable to a digital audience.”

This audience, he adds, is an attractive and highly engaged one. It’s about 50,000 strong between Twitter, Facebook and Instagram; around 75% of them are between the ages of 18-34, and 77% are based in Florida. But is this his audience, or a subset ultimately borrowed from Publix? 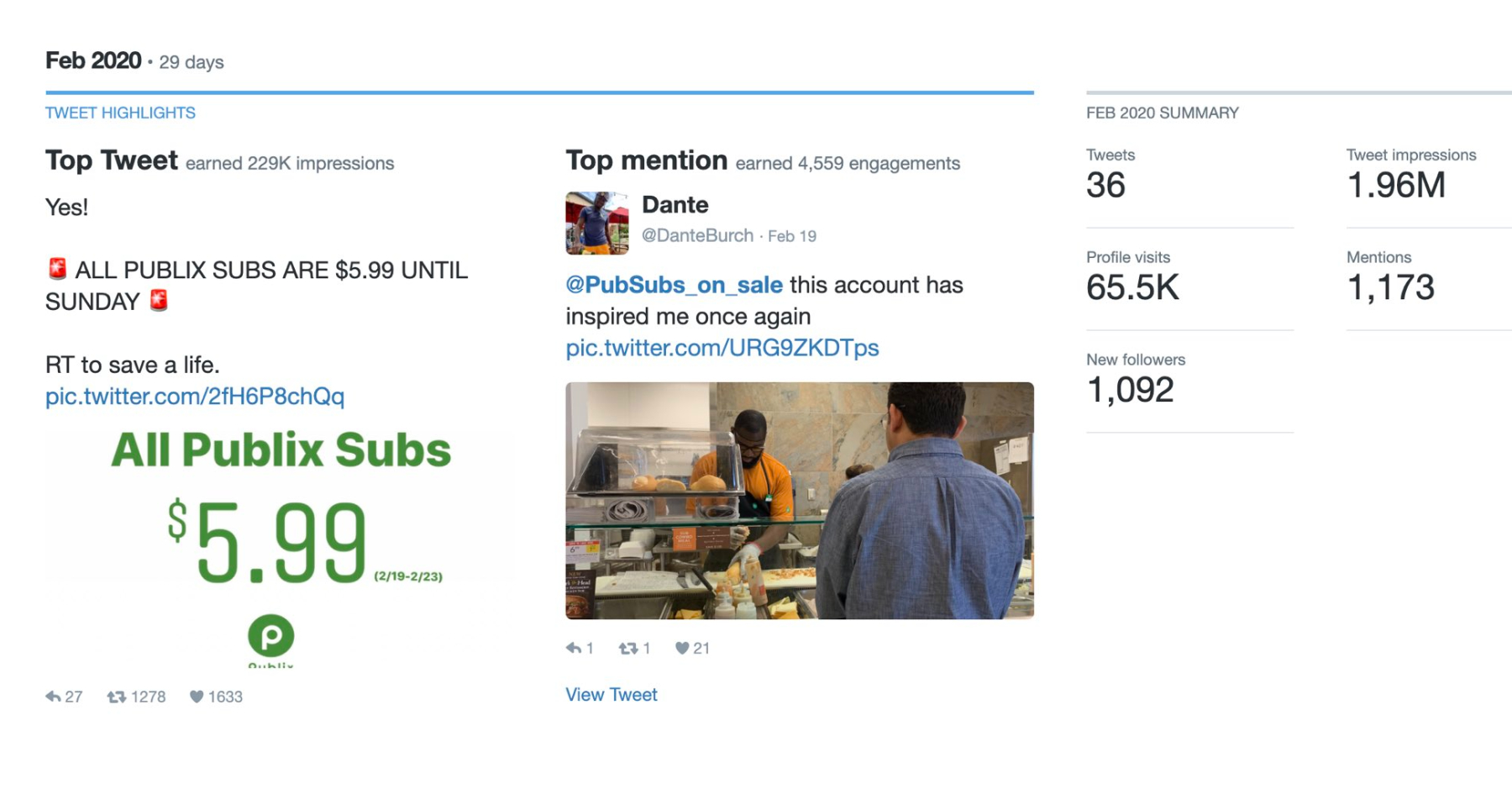 A screenshot of analytics showing the reach of the @PubSubs_on_sale account. Courtesy of Bryan Dickey.

Dickey is up front about his intentions to find a way to profit from his work. He said he has shut down his text-based “VIP” club, and his merchandise sales, following Publix’s admonitions. During the seven-week period which he didn’t tweet, Dickey said he was “at a crossroads,” wavering between the seeming opportunities in front of him and the “mission” that inspired the project—to make fellow Floridians happy.

“I believe in capitalism. I want to make money off of this.”

“I believe in capitalism. I want to make money off of this,” he says. “I’ve done this for four-and-a-half years, since January of 2017, and at some point it’s tough to continue doing it without recognizing that I could be compensated for my time, either from Publix or from people that support me, just believing in the creator that brings the value. But I haven’t found a way to make it valuable to me financially. So that's why I’m at a crossroads.”

Dickey says he imagined as his following grew that the retailer might inquire about acquiring the site from him. That never came about, but other attempts to profit from have only resulted in the threat of legal action. Dickey said he has spoken to an attorney and is contemplative—but not entirely certain—about what might lie ahead.

“My thought is that Publix could one day absorb this. But the longer I go, the less likely [that seems],” he said. “In the first year I thought it was totally possible, with 10,000 followers and it’s growing like crazy that Publix is going to want to get their hands on this. Now, here we are at 40,000 on Twitter, 15,000 on Facebook, 1,500 on Instagram, and I’m getting more and more pushback than ever.

“I understand they’re a large legacy company. They may not want to absorb something like this. Maybe I’ve gone too far on representing their brand,” he continues, adding, “I understand it’s probably a pipe dream of them acquiring this type of asset.”