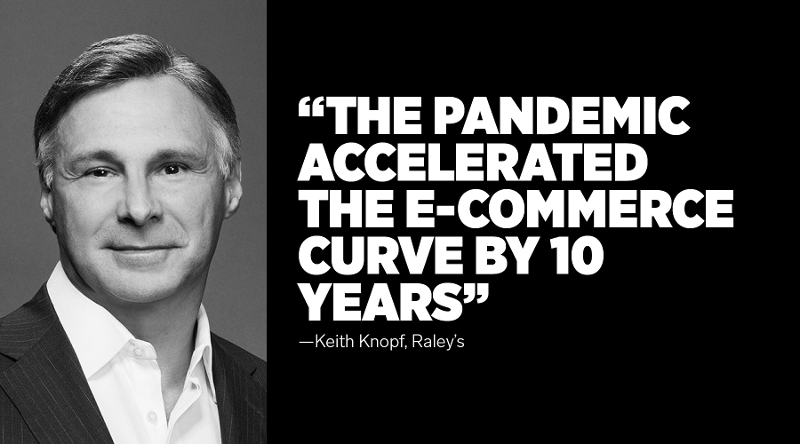 More than lessons learned in 2020, Keith Knopf, president and CEO of West Sacramento, Calif.-based Raley’s Supermarkets, is struck by the strength of an industry and its customers’ ability to weather the tremendous challenges of the past year.

“The pandemic has been a validation of the resiliency of the people who make up the Raley’s organization and the communities we serve,” says Knopf. “People came together to do the right thing and put safety first. I’m proud of the fact that we’re so resilient.”

It’s resiliency that was proven time and again in the last year. “While most all businesses have contingency plans for crisis management and have at one point managed some sort of crisis—economic, natural disaster, etc.—what’s different about [COVID] is how it affected the health of the people and the duration of it,” says Knopf. “Most crises have a beginning, middle and end, so you can get your head around how long the event will be. But it has been very unclear, due to the protracted nature of this pandemic, where we are in the cycle.”

The uncertainty of the past year has inspired a different approach from Raley’s leadership. “Maintaining a team’s engagement during a crisis with no clear end requires a different kind of leadership,” says Knopf. It also requires different communication that is neither overly optimistic nor too pessimistic to withstand the journey.

“Leadership has to be attuned to the team. They must listen and be visible,” says Knopf, who along with other members of the Raley’s leadership team continue to visit stores six days a week to express gratitude to and help navigate front-line employees who can’t work from home. “We’re stronger because of it,” says Knopf of the store visits. “And we’re going to keep doing them until we return to whatever normal is.”

Additionally, every six weeks Raley’s holds a video conference call to gather team leaders and other personnel to assess how things are going. “The frequency and nature of the communication are important,” says Knopf, who adds that the calls are an opportunity to ask what the team is thinking and how they are feeling.

For Raley’s, which has long focused on health and wellness in its stores with the goal of changing the way the world eats, one plate at a time, the pandemic has also been an opportunity to help its customers stay healthy by encouraging the consumption of foods that are good for them and avoiding what’s not. Knopf says its stores have seen strong growth in free-from foods for people and pets, with sales of healthier offerings up by as much as 40%. Fresh foods are also performing particularly well, including produce, meat and seafood.

The pandemic also drove sales of this healthier fare and all its offerings online. “We had a very sophisticated digital ethos before the pandemic, and we were really able to augment our capabilities during the last year,” says Knopf. “Now we do in a day what we used to do in a week. In the last 12 months we’ve seen a 275% increase in e-commerce.”

Last April, Raley’s opened a dark warehouse store that serves as what Knopf calls a “hub and spoke model” for other area stores. The company plans to add between five and seven dedicated e-commerce facilities in the next 12 to 36 months. Mindful of its direct relationship with its customers, Raley’s uses its own platform and delivery.

“The pandemic accelerated the e-commerce curve by 10 years,” says Knopf, who expects 70% to 80% of shoppers will stick with online shopping post pandemic. “The biggest barrier was enrollment, but out of necessity, people learned how to enroll, and we would also get on the phone and help them. While there are some customers who are 100% delivery or pickup, for the most part we see customers do both. I think that’s the future.”

For more reflections on the past year, click here.