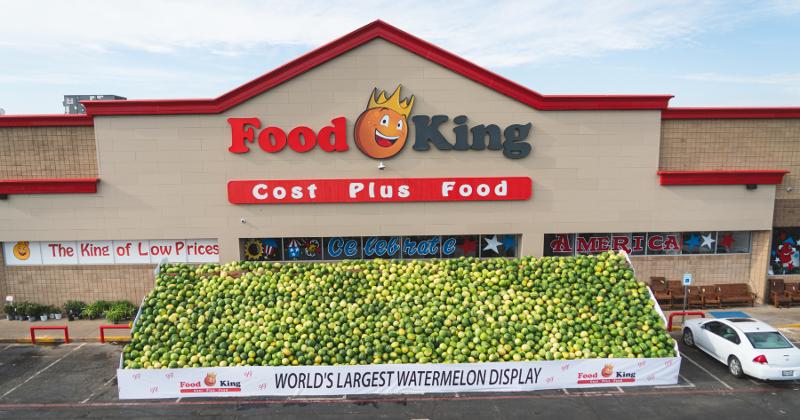 Editor's Note: An adjudicator from Guinness World Records concluded June 24 that Hy-Vee had broken the record for largest serving of pancakes. The record was officially broken when employees flipped the 12,717th pancake; however, the team continued to cook and ended the event with 13,000 pancakes at 12:16 p.m.

Hy-Vee and Food King have world titles on their minds. West Des Moines, Iowa-based Hy-Vee will attempt June 24 to break the Guinness World Record for largest serving of pancakes, while Food King, a wholly owned subsidiary of Pay and Save Inc., said it now claims the title for largest watermelon display.

On June 2, a Food King in Lubbock, Texas, created a display of 12,825 watermelons—totaling about 199,000 pounds—outside its store that it said breaks the previous record set by Cub Foods of Edina, Minn., on July 31, 2014. Although still unverified by the Guinness Book of World Records, Food King said its watermelon display contained 2,625 more melons and was more than 42,000 pounds heavier.

The display doubled as a marketing event, with watermelons priced at 99 cents each, and games, prizes and in-store specials available to customers that day.

“In a marketing area with a draw of roughly 270,000 customers, we had to place a limit of two watermelons per customer,” said Roger Lowe Jr., CEO of Pay and Save Inc., which operates 140 stores across Texas, New Mexico, Colorado, Kansas and Arizona. “It was one of the greatest traffic drivers I have seen over the course of my entire career.”

Over in Blue Springs, Mo., Hy-Vee will be attempting to break the record for largest serving of pancakes as it celebrates the launch of the company’s new “Best Breakfast in America” menu offerings. The record was set in Moscow, Russia, in 2017, with 12,716 pancakes, and Hy-Vee hopes to beat that preparing an estimated 13,000 pancakes from about 5 a.m. to 1 p.m. June 24.

An adjudicator from Guinness World Records will be on-site during the event to certify the results, and afterward all pancakes made will be donated to Harvesters–The Community Food Network in Kansas City, which it estimates will feed about 6,500 individuals, or more than 1,600 families, in need across Missouri and Kansas.