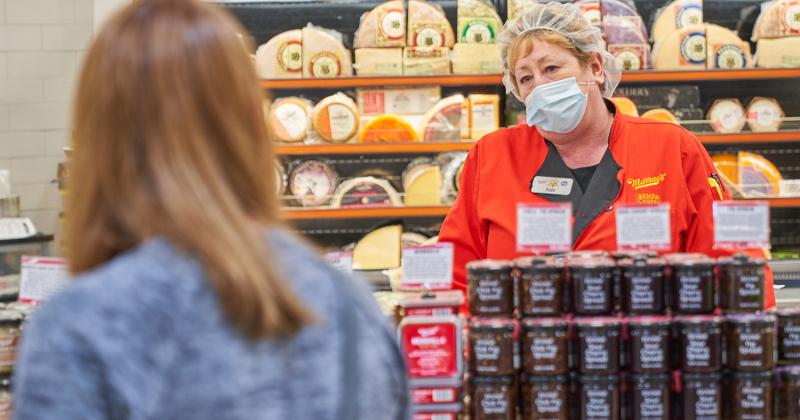 Movements by states such as Texas and Mississippi to discontinue mask mandates has put food retailers doing business in those states back into an awkward position where they’re on their own to interpret—and are limited as to how to enforce—federal health recommendations that may conflict with what’s permissible in states—and could be potentially harmful to their workers, shoppers and businesses.

In reaction to the proclamation earlier this week by Texas Gov. Greg Abbott that Texas would strike a statewide mask mandate and restrictions on capacity effective March 10, The Kroger Co. said this morning that it would continue to require everyone in its stores to wear masks until its workers can receive the COVID vaccine, saying the companywide policy was meeting recommendations of the federal Centers for Disease Control and Prevention (CDC) while meeting its own priorities in safeguarding workers.

“Additionally, in alignment with CDC guidance, we continue to encourage everyone to practice social distancing and frequent hand washing as well as consider the use of no-touch grocery delivery or low-contact grocery pickup,” the Cincinnati-based retailer said.

The easing of restrictions by the state, however, apparently leaves companies such as Kroger with little authority to enforce such a policy.

“Our understanding from the governor’s office is that as a result of the governor’s action today, retailers in Texas will not be in the position of enforcing or policing the wearing of face coverings, nor face fines or penalties for allowing unmasked customers to be in their stores,” the Texas Retailers Association trade group said in a statement this week.

The group said the retailers, as a matter of employee policy, can require employees to wear masks while on company time, and request that customers do, except in cases where a preexisiting medical condition may interfere. “This is no different from the old ‘no shirt, no shoes, no service’ ” policies that retailers may also have, the group added.

The situation recalls the confusion accompanying the initial reaction to the virus as it made its initial spread a year ago and food stores were deemed “essential businesses” allowed to stay open amid nationwide stay-at-home orders. Evolving health recommendations from federal, state and local authorities were not aligned and at times in conflict, leading to any number of ugly confrontations in stores and health risks to shoppers and employees.

Abbott framed his reversal of the order as a means of allowing businesses and families in Texas  to “have the freedom to determine their own destiny,” and his contention that between the ongoing vaccine rollout and availability of antibody therapeutic drugs, “Texas now has the tools to protect Texans from the virus.”

Abbott’s stance came the same day as a similar move from Mississippi Gov. Tate Reeves who argued the state should be “getting out of the business of telling people what they can and cannot do.”

The stances came a day after CDC Director Rochelle Walensky in a White House briefing reportedly urged officials not to take steps like there. “Now is not the time to relax the critical safeguards that we know can #StopTheSpread of COVID-19 in our communities and prevent another surge in cases,” Walensky tweeted on March 1.

“If the goal is to get schools, restaurants, ballparks and other industries open without capacity restrictions, requiring masks for a few more weeks is still the prudent course of action until more Americans have the opportunity to be vaccinated. Relaxing common sense, non-intrusive safety protocols like wearing masks is a mistake. We support governors reopening their economies and giving beleaguered restaurants and other small businesses the opportunity to rebuild and rehire workers. But going backwards on safety measures will unfairly put retail employees back in the role of enforcing guidelines still recommended by the CDC and other public health advocates. It could also jeopardize the safety of pharmacies and grocers that are gearing up as vaccination centers to administer millions of shots in the coming months,” RILA EVP of Communications and State Affairs Jason Brewer said in a statement.

"Tremendous strides have been made in recent weeks lowering the rate of COVID-19 infections and vaccinating seniors and other vulnerable populations, and President [Joe] Biden’s announcement yesterday that every adult will have access to a vaccine by the end of May is great news. We should not jeopardize this progress with a premature victory celebration,” he added.

According to local reports, grocery retailers with a significant Texas presence, including Sprouts Farmers Market, Whole Foods Market and Walmart, like Kroger, are still requiring that customers wear masks. Others like H-E-B and Albertsons Cos. are still requiring their employees wear masks but are only go so far as strongly encouraging shoppers to do so.