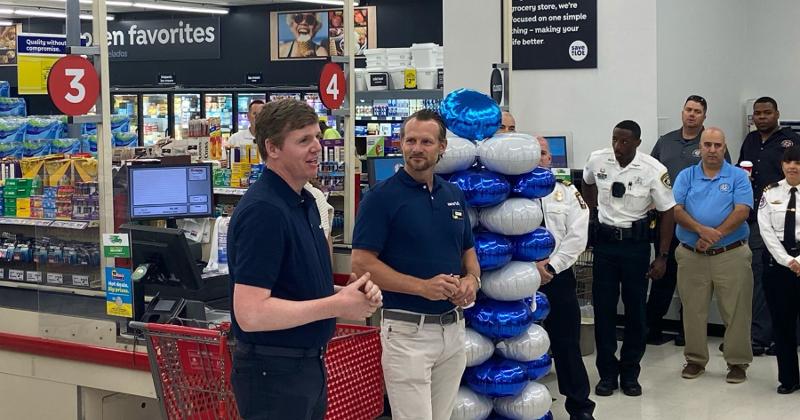 Kenneth McGrath, left, at a recent reopening event for a Save A Lot in Florida. Photograph courtesy of Save A Lot

Kenneth McGrath, who was appointed as the first leader of Lidl’s establishment in the U.S. before moving to rival Save A Lot for an eventful four-plus years as its CEO, is returning to Lidl in Germany, where he will become the international discounter’s new deputy chairman, effective Oct. 1.

That role became available in a cascade of top management changes at Lidl and its parent, Schwarz Group, which also operates the Kaufland chain in Europe. As reported earlier this month, Schwarz’ longtime CEO, Klaus Gehrig, is departing and is to be replaced by Gerd Chrzanowski, Lidl’s top executive. McGrath is to step into Chrzanowski’s former role, with responsibility for overseeing more than 11,000 Lidl stores in 32 countries. The news was first reported by Lebensmittel Zeitung, a German-based trade that also broke the news of Gehrig’s departure.

Lidl subsequently confirmed the appointment. “I am very pleased that with Kenneth McGrath we have been able to win back an international retail expert and experienced manager who has already contributed to our success,” Chrzanowski said in a statement.

A spokesperson for Save A Lot, and its parent company Moran Foods, confirmed to WGB that McGrath has informed the company of his intentions to depart “for personal reasons in conjunction with his upcoming relocation back to Europe."

“McGrath will remain with the company over the next few months, working closely with the board of directors and management team to ensure a smooth and effective transition to his successor,” the statement added.

Saving Save A Lot

McGrath is departing Save A Lot after a whirlwind tenure that began shortly after the St. Louis-based discounter was acquired by private equity firm Onex from Supervalu for $1.4 billion in late 2016. A comprehensive repositioning under McGrath’s watch—along with a massive debt load and hundreds of store closures—nearly wiped the company out before Onex departed in a refinancing early last year.

The company under McGrath reformulated and repackaged its private brands, cut prices and introduced a new store format that more closely resembles its efficient German hard-discount rivals like Aldi and Lidl. It is currently in the process of relicensing its corporate stores to independent operators and refashioning itself as a pure wholesaler to about 1,000 stores. It has made a series of announcements in recent weeks detailing plans for future store renovations and technology investments.

WGB reported earlier this month that Kevin Proctor, Save A Lot’s chief operating officer and a longtime colleague of McGrath’s, had also departed Save A Lot, taking a new role as president of Cost-U-Less, a chain of warehouse-style club stores with locations in California, Hawaii, the South Pacific and the Caribbean and owned by Canadian retail holding company North West Co.

Proctor and McGrath were colleagues at Lidl Ireland and in 2013, were appointed as the first leaders of U.S. expansion for Lidl, although they would both depart before Lidl’s first U.S. stores would open in 2017. They were then briefly colleagues at a Caribbean-based mobile phone network, Digicell, before they reunited as the leaders for Moran/Save A Lot.

These experiences will no doubt inform McGrath’s perspective on the prospect of continued investment for Lidl in the U.S. in his new role. Sources say the U.S. division, which has overcome some early troubles but remains a work in progress, has continued to be a topic of debate among Lidl’s top leaders.

Commenting to WGB earlier this month on the departure of Gehrig—known for his quick trigger-finger on executive replacements but also said to be a proponent of Lidl’s U.S. expansion—Marc Houppermans, executive partner of Discount Retail Consulting, Dusseldorf, Germany, said he anticipated Lidl and Schwarz would take on a more “modern” management style under Chrzanowski.

“For the overall country business development strategy, there will on the short term be no change,” he added. “Nevertheless, if Lidl USA will not make faster improvements, profits and get on track with its planned business development speed within a year from now, we are sure they will pull the plug and withdraw from the U.S. adventure.”

McGrath reportedly had strong reviews from colleagues regarding his early work establishing Lidl U.S. and prior to that, his leadership with Lidl in his native Ireland. And while it was never made clear why McGrath left Lidl initially, Lebensmittel Zeitung this week said top executives at the company at the time had tried unsuccessfully to persuade him to stay.

He returns to Lidl as something of a lesser-known quantity within the company, the paper added, in part because of the high management turnover that was common under Gehrig.