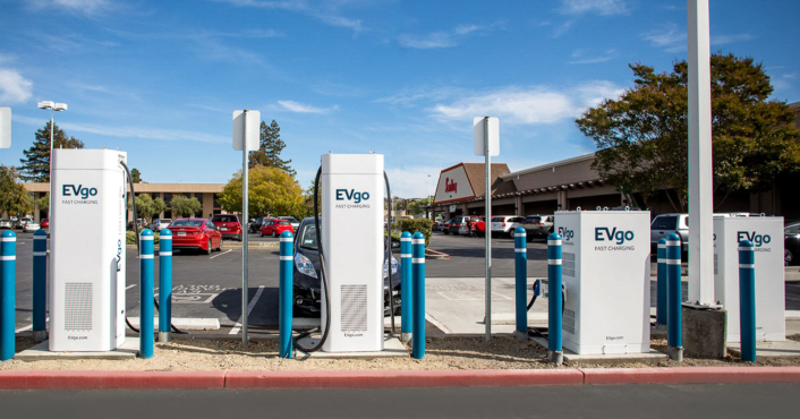 Most electric-vehicle drivers charging up at one of the growing number of grocery stores offering EV charging stations shop in-store while their vehicle juices up. Most, but not all.

Closing that gap—cutting down on the number of drivers otherwise content to sit scrolling on their phones or catching up on calls while their car charges—is one of the goals of The Save Mart Cos.' partnership with EV charging-station provider EVgo. Through the EVgo Advantage program, drivers using EVgo charging stations at select Save Mart and Lucky California stores can get special in-store promotions delivered via email, text or the EVgo app once they start a charging session.

The deals are meant to incentivize in-store shopping, and EVgo said in a news release March 16 that a company survey found that 45% of EVgo charging sessions had resulted in new incremental shopping visits. EVgo Advantage first launched in five Lucky/Lucky California stores in 2019; the partnership now is expanding to seven additional Save Mart and Lucky California stores.

Hal Levitt, SVP of retail operations and supply chain for Modesto, Calif.-based The Save Mart Cos., said that customers have charged more than 5 million minutes on EVgo chargers in the past three years as more consumers transition to electric vehicles. Expanding the EVgo Advantage program, he said, is a "natural next step" for Save Mart and one that will "drive greater benefits for our customers and continue our ongoing commitments to sustainability initiatives." EVgo touts that its network of charging stations across 35 states is powered by 100% renewable energy.

Save Mart's first installation of an EVgo charging site was at a Lucky store in Fremont, Calif., in 2015; the grocer—which operates more than 200 stores throughout California and northern Nevada—now has 32 EVgo fast chargers installed.