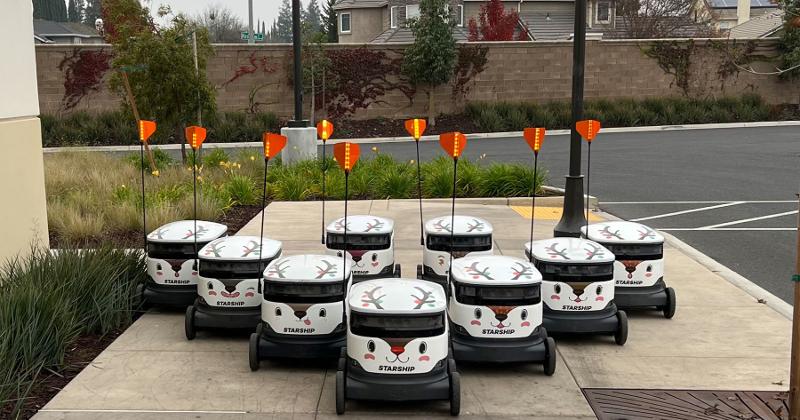 Photograph courtesy of Save Mart

Save Mart shoppers in Modesto, Calif., are making their lists, checking them twice and requesting reindeer robots to deliver groceries to their doors.

This year Save Mart is once again partnering with robot delivery company Starship Technologies to bring its fleet of reindeer robots to life. The retailer has also expanded its reindeer robot grocery delivery from its flagship Modesto store at 3401 Oakdale Road to serve 10,000 households.

But this year, Save Mart’s reindeer robots are delivering more than food, beverages and household supplies. Adding to the festive experience, Save Mart shoppers now have the option of musical deliveries, choosing from a selection of top seasonal hits for the reindeer robot to play upon arrival. The singing reindeer robots will be making deliveries until Dec. 31.

Save Mart’s flagship store served as the first grocery store in the U.S. to partner with Starship Technologies. The innovative service offers shoppers an added solution for efficient and contactless grocery shopping, says the company.

Since its September 2020 launch, Save Mart has expanded its delivery area to nearly 20 square miles and 10,000 households, serving shoppers in the communities between Clarantina Avenue and McHenry Avenue to Yosemite Avenue and Claus Road in Modesto. The robots, each of which can carry up to 20 pounds of groceries—the equivalent of about three shopping bags—can travel up to four miles roundtrip, providing a safe, low-cost and contactless delivery alternative for Save Mart shoppers, the company adds.

Part of The Save Mart Companies, Save Mart operates 81 stores across California and Northern Nevada. It remains the largest family-owned grocer in California. Committed to sourcing a wide variety of local products to the communities it serves, the company operates more than 200 traditional and price-impact stores under the banners of Save Mart, Lucky California and FoodMaxx. In addition to its retail operation, the company also operates Smart Refrigerated Transport and is a partner in Super Store Industries (SSI), which owns and operates a distribution center in Lathrop and the Sunnyside Farms dairy processing plant in Turlock.

Starship Technologies’ autonomous robots are designed to deliver food, groceries and packages locally in minutes. The delivery robots have traveled millions of miles and completed over two million autonomous deliveries around the world, says the company. While they drive autonomously, they are monitored by humans who can take control at any time.