United Natural Foods Inc.'s (UNFI) pending $2.9 billion takeover of its larger counterpart, Supervalu, is a “transformative” deal that will prepare the distributor to serve an industry where scale will become ever more crucial and companies will continue to join together, officials of UNFI said in a presentation. 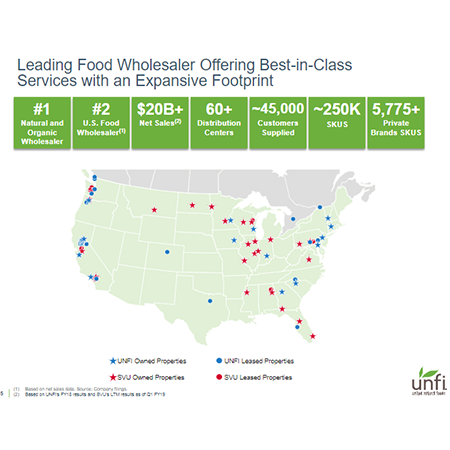 “The world is shifting and changing,” UNFI CEO Steven Spinner told analysts during a conference call discussing the Providence, R.I.-based company’s financial results and outlook, including the anticipated closing of the Supervalu deal late this year. “There has to be consolidation. And my view is, I wanted to be at the front end of it, as opposed to the back end of it.”

Consolidation among food distributors is especially important, because “scale is what drives the day in distribution,” he added.

Spinner's remarks came as incoming Supervalu CEO Sean Griffin and UNFI CFO Michael Zechmeister presented updated expectations for the deal, saying that additional work since the announcement indicated the company would not only achieve synergies of $175 million by year three but $185 million by year four.

UNFI anticipates that two-thirds of the savings would come as a result of reduced overhead, with the remainder being operational costs.

Officials also expressed confidence that they could sell Supervalu’s remaining retail banners by early next year, noting “advanced discussions with select buyers” for a portfolio that includes the Shop 'n Save stores in St. Louis and in Pennsylvania, West Virginia, Maryland and Virginia, as well as 114 continuing stores under the Cub, Hornbacher's and Shoppers banners.

Supervalu officials are working on those deals, including the sale announced earlier this week of 19 St. Louis Shop 'n Save stores to Schnuck Markets.

“If you were to ask me a month or so ago, I would've said I would've been a little more worried about retail, given that we don't have a competency in retail,” Spinner said. “But now that we've gotten a chance to really get into it, look under the covers, meet some of the Supervalu people who are tasked with divesting these assets, and consistent with the announcement earlier this week on the sale to Schnucks, I'd say I feel much better about our ability to divest ourselves of retail in a really reasonable and economic timeframe.”

Spinner said the retail divestitures could result in the loss of some of the supply agreements currently connected to those banners.

“In the locations where we don't necessarily need the capacity, or in locations where it makes sense, we would be more disciplined around making sure that a supply agreement is attached to the sale,” Spinner said. “But I would tell you, based upon my initial view, we're going to have a great deal of success here. There's a lot of demand for the services that Supervalu and UNFI provide.”

Griffin said his mission was “to run the combined businesses successfully, beginning on day one,” noting that savings on indirect spending such as procurement of non-saleable goods and services would begin immediately.

Supervalu’s current retail customers, in the meantime, will benefit by having access to more specialty and natural products and a lower cost than they would have without the deal.

“I think the reason that scale wins here is today, the more a retailer—a conventional retailer in particular—can buy from a singular source, the better it's going to be for them,” Griffin said. “It just drives down their cost overall. It reduces pressure in the back of the store to receive more and more invoices. And so, the message we're hearing from customers is ‘Please, sell me more of the store. Whether it be conventional, whether it be produce or protein. I need to aggregate my purchases. Less trucks, more scale, lower cost.’”

For UNFI the deal will reduce its exposure to its largest customer, Whole Foods Market, and address capacity constraints. Sales to Whole Foods currently comprise about 37% of UNFI’s total revenues but would reduce to about 18% on a pro forma basis when the deal is complete. Whole Foods sales tend to carry lower margins than sales to other channels, officials noted, a phenomenon contributing to profits that came in lower than anticipated in UNFI’s fourth quarter and fiscal year.

Additional warehouses will reduce stress on UNFI’s current business and provide more opportunities to grow where the company is already at max capacity.

“Right now, we're forced to either store products in trailers that are really inefficient, or we have to rent space at public warehouses and transport it back to our DCs on a daily basis; it’s really inefficient, really expensive,” Spinner said. “So, right out of the gate, we're going to get out of public storage wherever we can, and we're going to get out of trailers wherever we can, and that's a huge win.  We also have a couple of markets in the U.S. that we're at capacity. So, when a customer says we'd love you to do some additional service, our answer unfortunately has to be you're going to have to hold until we have some capacity within that market. And with the addition of the new DCs, we no longer have that issue.”