Lidl, the German discounter that opened its first U.S. stores a year ago, is growing on consumers – particularly younger ones – and eating away at advantages of its traditional competitors in surprising ways, a new study released Thursday indicates.

The study, based on surveys conducted by global consulting firm Oliver Wyman in June 2017 and again this April, found that 48% of 600 consumers who tried Lidl are now shopping there more than twice per month. Consumers also are spending more money per trip at Lidl today than a year ago, indicating they have found a wider range of Lidl products they prefer. Younger shoppers – ages 18 to 34 – had a particularly high awareness of Lidl and shopped there frequently, appreciating both Lidl’s private label product quality and attractive prices.

The study indicated Lidl is indeed adjusting its approach based on results from its initial fleet, as executives of the chain had said it would upon arrival last year, and supports previous indications that its openings have had a meaningful impact on competitor pricing. Store volumes, which reportedly have disappointed leadership of Lidl’s corporate parent, led to a reassessment of its real estate and may have contributed to a recently announced U.S. leadership change, may also be improving, Oliver Wyman officials said in a conference call, based on its research indicating consumers are shopping more frequently at Lidl and buying more per visit than they did when asked the same questions last year. Shoppers at newer Lidl stores were also giving the retailer higher marks than shoppers at its earliest opened locations.

“Lidl is new in the U.S. market, and we expect that they will gradually adapt their model based on consumer feedback, a pattern they successfully honed entering more than 20 countries in Europe,” said Tanja Ebner, principal in Oliver Wyman’s Retail and Consumer Goods practice. “What Lidl has done so far has struck a chord with younger consumers who are valuing Lidl’s good private brand product quality almost as much as their low prices.”

The Wyman study indicated that Lidl’s approach to offering high-quality merchandise at market leading prices was resonating with shoppers, giving the retailer a “two-fisted grip that strengthens its competitive position, making it harder for incumbent grocers to compete by investing in lower prices.” 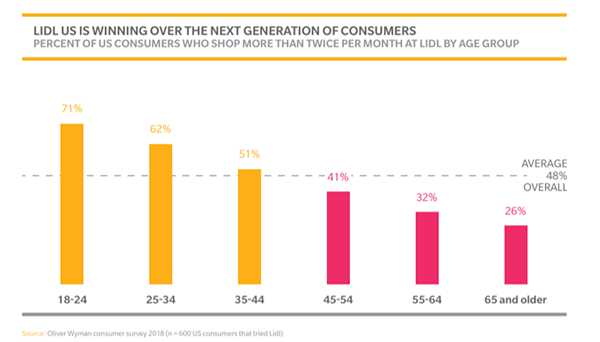 Consumers at the same time indicated that a lack of convenient locations relative to peers was the common reason shoppers would not continue shopping at its stores.

The research indicates that the brand is resonating most strongly with younger consumers and increasingly less so among ascending groups of older shoppers. For example, 71% of consumers ages 18-24 say they shop at Lidl at least twice a month, along with  62% of shoppers ages 25 to 34 and 51% of shoppers ages 35-44. The figure increasingly drops to 41% (45-54), 32% (55-64) and 26% (65 and older). Wyman officials said that indicates that Lidl was “winning the next generation of shoppers” thought to be less brand-dependent and more price-savvy.

Officials expressed some surprise at how well Lidl performed against competitors in attributes beyond price -- primarily quality, assortment, freshness and convenience. In most categories, Lidl was perceived to be on par or better than the major competitors in the markets it operates, including Walmart, Kroger, Harris Teeter, Publix, Aldi and Food Lion.

“Beyond the 39% of Lidl consumers who cite low prices as the reason they shop there, another 46% choose [the] offer as the primary reason for visiting the grocer,” the report said. “These include good quality, good promotions, really fresh products and good choice. Younger customers value quality products almost as much as low prices.”

Lidl is stealing customers from a range of incumbents on this combination, Wyman said. For example, 52% of Walmart customers indicated that they shop at Lidl at least two to three times per month on average, and numbers for Kroger and Aldi are similar.

“These figures reinforce other analyses we have carried out, which show shoppers splitting baskets into multiple trips," the report said. "This trend is worrisome for supermarkets and hypermarkets, whose business model is built on capturing the vast majority of their consumers’ spend.”