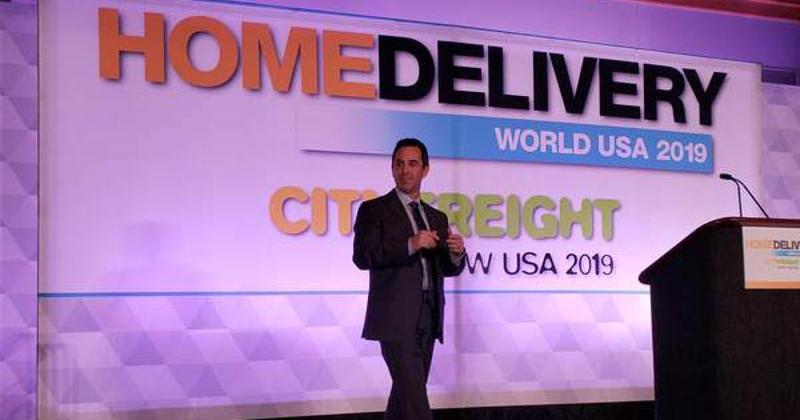 Recent innovations from Giant Food Stores—including the debut of an urban store format and a new e-commerce brand launched in a dark-store conversion—spring from a carefully crafted brand foundation and reflect an emphasis on courage as a corporate value, said Matt Simon, chief marketer for the Carlisle, Pa.-based Ahold Delhaize brand, in an address at the Home Delivery World show last week in Philadelphia.

Simon described Giant as a “96-year-old startup,” saying the chain, although mature, needed to “have the courage to change” to serve an evolving customer. This meant Giant needed to overcome what he described as a long-standing fear of operating in urban spaces and developing the Heirloom Market concept that debuted earlier this year and will spread to three other downtown Philadelphia locations later this year.

“The courage to innovate and grow in the city is a big part of who we are now,” Simon said. “We couldn’t just take a Giant from the suburbs and just drop it into the city. Philadelphia is a city that can be tough to win in. So we created a team and  told them: Go dream. See what it takes to win in Philadelphia.”

The new e-commerce brand, dubbed Giant Direct, reflects the first activation of an overarching new digital strategy at Ahold Delhaize aiming to more closely align activity in stores and online. The effort ties Giant’s loyalty program to its e-commerce and is using a dark store in Lancaster, Pa., as a hybrid e-commerce hub offering pickup and physical shopping. “What’s important today is that it’s not just a store or online—it’s all together,” Simon said. “It’s all one experience. And if you break any part of that experience, the customer remembers it and will hold you accountable.”

Preparing the Giant brand to be able to support these kinds of innovations was a project in itself, Simon said, and it involved Giant strengthening ties in communities through partnerships and outreach in 2018 and focusing on getting the fundamentals right in stores.

“Before we go out there and push e-commerce, new formats and all this change, we wanted to make sure we had the foundation right,” he said. “All the associates in our stores, the communities we live in, the media, we had to make sure it was all working right. So it was a year of us giving—giving more than usual. We had parties in every local community and gave our time and our money to be sure everyone knows what our brand stood for so we could build off that really strong foundation and start to innovate.

“Grocery, more so than other industries, is sort of week to week: The sales you drive is the fuel to do new things,” Simon continued. “Last year, focusing on things like produce and meals kits and customer service and getting those fundamentals right was very important for us. We did a really good job last year, and that set the stage for 30,000 people all going in the same direction.”

Simon said Giant draws guidance on its evolution from its stated values, including courage, which he said was vital for businesses to adapt in fast-changing times.

“You can’t write 10-year plans anymore because you have to change them in two years,” he said.

“Courage to innovate, courage to dream, is really important today,” he said. “The courage to try new things, and the courage to fail, is what’s going to make or break a lot of companies today. It’s OK to fail; you have to fail a little bit. But you want to do it quick, cheap and with the courage to push forward.”