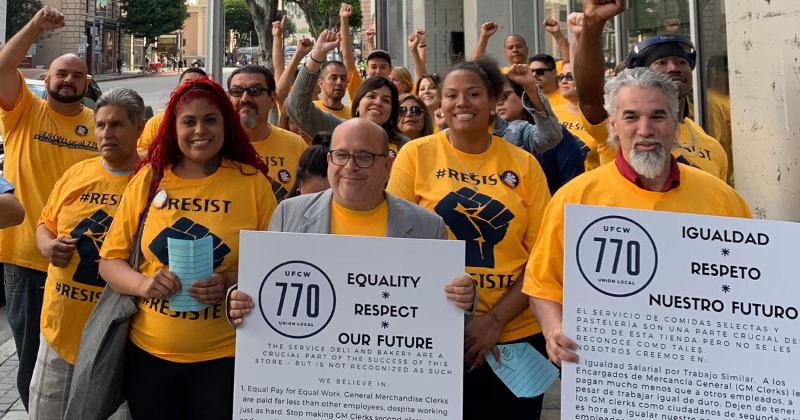 After months of talks but little progress toward a new labor contract with employers, seven locals of the United Food and Commercial Workers union representing Ralphs, Albertsons, Vons and Pavilions workers in Southern California said their members will vote on June 24 and 25 about authorizing union leaders to call a strike.

The unions hope the threat of a strike will demonstrate solidarity among workers and coax what they would consider better contract terms from employers. Ralphs is owned by The Kroger Co., and Albertsons, Vons and Pavilions are owned by Albertsons Cos.

The unions and the grocery chains have been negotiating to replace a 2016 contract that expired in March. The terms of that contract remain while negotiations continue.

Southern California was the site of a four-month strike-lockout in 2003 and 2004 that badly damaged both workers and their employers. The U.S. grocery industry had been relatively free of labor disputes since then, until a surprise 11-day walkout by Stop & Shop workers represented by five UFCW locals in New England earlier this year.

That event garnered wide support from shoppers and from political figures, and all but wiped out Easter and Passover sales for Stop & Shop, the Massachusetts-based division of Ahold Delhaize.

Industry consultant Burt P. Flickinger III of Strategic Resource Group told WGB in an interview this week that the Stop & Shop strike’s success may embolden workers at the significant but dwindling number of union-backed chains in the U.S.

The possibility of a work stoppage in California illustrates the pressure union-backed chains are under as nonunion competitors—which generally get by with lower cost structures—gain greater share and in turn pressure incumbents to trim costs to remain competitive. In California, Walmart and Aldi have opened hundreds of stores since the 2004 event, Flickinger said. Both Ahold Delhaize and the employers in Southern California entered negotiations seeking agreements that they said would help them remain competitive in a changing and competitive retail market.

UFCW officials say employers are “delaying a deal and demanding takeaways,” including wage rate cuts from some clerks and checkers and wage increases for others of less than 1%. They also said employers' proposals would put healthcare “on the brink of bankruptcy.”

John Votava, a spokesperson for Ralphs, told WGB this week that Ralphs was seeking a “fair and balanced contract this is good for everyone,” and acknowledged it could be a lengthy process.

“As you know, negotiations are about finding compromise and this can take time,” Votava said. “Throughout the negotiations it's business as usual in our stores, and Ralphs is extremely proud of our associates who remain focused on serving our customers, communities and each other.”

The union and employers are in agreement on one thing: Each say they haven’t made meaningful progress.

Ralphs on a website providing contract updates for workers this week acknowledged “very little progress” was made on negotiations June 10 and 11. “We continued to discuss several language items but failed to come to an agreement on them. We still need to work through wages, healthcare and pension. We continue to share with the union that our total compensation package either currently meets or exceeds that of your peers in this market,” Ralphs said in a statement.

John Grant, president of Los Angeles-based UFCW Local 770, in a video update to members speaking about the same bargaining session, said, “I never felt such disrespect from an employer, for myself and for the working people of this union.”

Ralphs specifically disputed the union’s characterization that employers would cut healthcare contributions, arguing that the company had offered to make greater contributions over the life of the contract. Ralphs also acknowledged this week that the sides were “far apart” on wages.

Negotiations are scheduled next for July 10-12. The last contract agreement was reached in August 2016 after several months of talks.