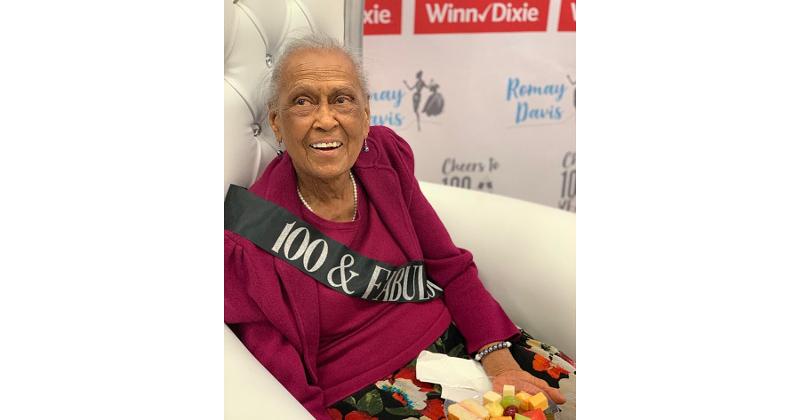 "Winn-Dixie has a deeply rooted history in Montgomery, and part of our diverse story includes amazing associates like Romay Davis," said Anthony Hucker, president and CEO of Jacksonville, Fla.-based Southeastern Grocers. "As we celebrate Ms. Romay, we are moved by her unwavering dedication and strong work ethic, which inspires others to be their best."

Even at age 100, Davis is hardly your run-of-the-mill centenarian, and throughout her life, she was known for breaking barriers and serving others. Romay was born on Oct. 29, 1919, in King George County, Va. After graduating from high school, Romay joined the Army and served in Word War II. Following the war, she moved to New York and enrolled in New York University to study education. After completing her degree, she moved to Brooklyn, where she began a successful career in the fashion industry as a pattern maker, designing clothes for women and children. As a result of her work, Romay traveled all over the world and also took up opportunities to work as a model in New York.

After 30 years in fashion, Romay decided to retire in 1982 and move to Montgomery with her husband. Over the next 20 years, Romay stayed active through travel and painting, as well as working with her church and volunteering for different causes, including adopting military families based in Montgomery. She is known by close friends as an animal lover and humanitarian.

After her husband passed away, Romay decided to go back to work, and she was hired by Winn-Dixie in 2001 at age 81. Today, she still works 20 hours and drives herself to the store every day, the company said.

"On behalf of Winn-Dixie, we salute you, Ms. Romay, for a job well done in serving your community and making a difference in so many lives over the past one hundred years," Hucker said.