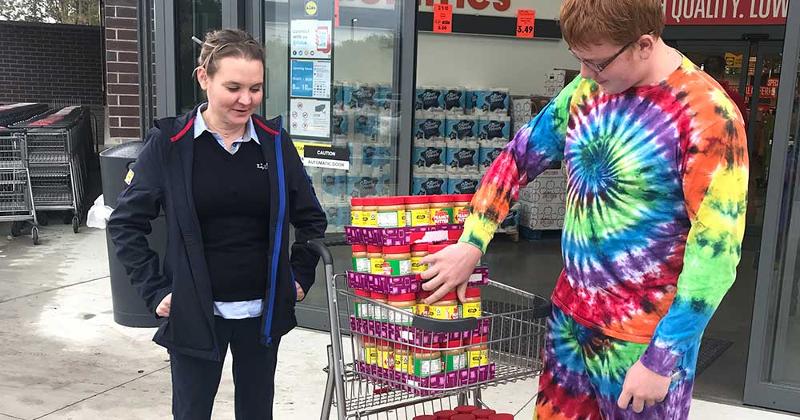 “Six English muffins a day takes a fair amount of peanut butter,” says Bean’s mother, Tracy. “We figure he goes through a jar every two or three days.”

Not surprisingly, Tracy McKay has become an expert at buying peanut butter. And when the Woodbridge, Va.-based writer and mom of five came across peanut butter at a newly opened Lidl store in Manassas, Va., priced at 78 cents a jar, she knew it had to get it into her pantry.

“I asked if there was a limit, and there was not—so I bought six cases,” she says.

That was last February. By October, the supply of 72 jars, each one carefully numbered by its eater, was dwindling. And that’s when Bean went to Twitter.

My name is Bean. I eat peanut butter and jelly English muffins for three meals a day.

Back in February, my mom bought 72 jars of your peanut butter when it was on sale for 78 cents a jar. I numbered each jar. pic.twitter.com/u4wBgH8rzm

Bean has autism, a developmental disorder affecting social communication and interaction. Autism affects each of its patients differently. For Bean, Tracy says, dependability and routine are very important. “He likes to know what is going to happen, so he can better prepare himself," she says. "He is sensitive to a lot of external stimuli, and too much ambient noise, smells or perceived chaos creates anxiety.”

Bean’s coping mechanisms include his choice of clothing—brightly colored pants and shirts he calls his “party suits”—and his diet, which is carefully curated to textures he can rely on. Bean is also an expert on toasters, his mom says, having conducted research on the best four-slot toaster for the McKay family. “We have a backup, for when the original eventually fails,” Tracy says. 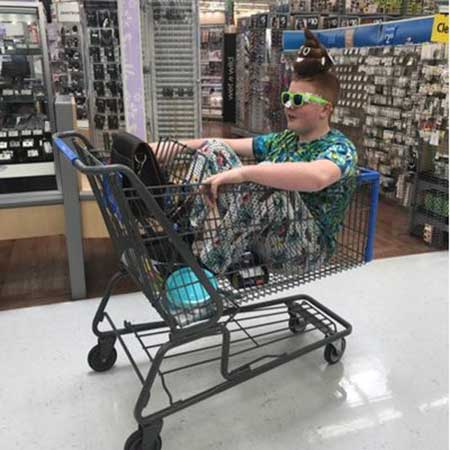 At Lidl U.S., which has headquarters in nearby Alexandria, Va., social-media staff recognized Bean’s tweet for its potential to generate some attention for the new brand and responded with a challenge. It arranged for another 72 jars of peanut butter for the family and in the meantime upped the ante: Get 72,000 retweets, Lidl said, and the retailer would provide Bean with a lifetime supply of peanut butter.

For Bean, who doesn’t always read real-world social interactions accurately, Twitter turned out to be an ideal conduit for the ongoing conversation with Lidl, and subsequent attention from a community of supporters, many of whom recognized in Bean’s peanut butter quest the joys and challenges of raising children with autism.

Tracy says the experience had been similarly rewarding for the McKays. The best thing, Tracy says, “was hearing so many people share their experiences,” while raising awareness of the uniqueness of the condition. The campaign incidentally put her to work at times fielding inquiries from many who expressed concern over the diet. (Bean has consulted with doctors and a registered dietitian, who’ve declared him a healthy kid, she notes).

“I especially value those with autism who have felt validated in their own self-selected diets, and the neurotypical people who have expressed that they didn't ever realize diet was a sensitivity for people on the spectrum,” she says. “More understanding is always a good thing.”

Bean’s campaign started relatively slowly, but it caught fire in the centrifugal cycles of social media. Its biggest push came when it caught the attention of noted British author Neil Gaiman, who spread word to more than 2.5 million of his followers.

BEAN HAS BEEN OFFERED A LIFETIME SUPPLY OF PEANUT BUTTER IF HE GETS 72,000 RTS TO HIS TWEET.  He’s autistic, that’s what he eats. Let’s get him his PBJs. RT his original tweet.

(If you’re worried about his health or nutrition see posts from his mother on original thread.) https://t.co/G7U3Iey7hQ

Bean’s message crossed the 72,000 retweet hurdle just last weekend and is now approaching 80,000, and Lidl said it is preparing to “spread the love.”

“We’ve been rooting for him,” Lidl spokesman Will Harwood says.