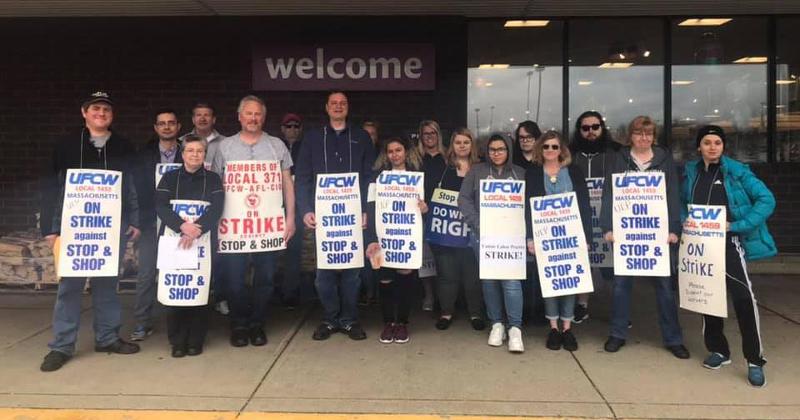 Workers at Stop & Shop stores across New England are returning to the job Monday after the retailer and union negotiators agreed late Sunday on a tentative contract, ending a 10-day strike.

The strike, which began April 11, was the industry’s longest and most expensive since the five-month strike-lockout affecting multiple banners and UFCW locals in Southern California in 2003 and 2004. In 2014, a wildcat strike by nonunionized workers at Market Basket stores in New England lasted six weeks.

“We sent a message to your employer—they heard you,” Local 919 President Mark Espinosa said in a video message to members Sunday.

With 253 stores in Massachusetts, Connecticut and Rhode Island, Stop & Shop is New England’s largest supermarket chain—and also one of the few remaining that employs unionized labor. The strike was largely effective in turning business away from Stop & Shop, which closed some stores and operated others with limited hours and services. Reports indicated competitors swelled with new business, absorbing the heavy and often profitable spring sales a week ahead of Easter and Passover.

Burt P. Flickinger, managing director of Strategic Resource Group, estimated the strike cost Strike & Shop about $20 million in sales per day and heavy profits of up to $2 million a day in the first week as fresh inventory for the holidays largely went unsold.

The 31,000-member strike—the largest public sector walk-out in any U.S. company since the Verizon strike of 2016—generated nationwide attention. Over the course of the event, 2020 presidential candidates including Elizabeth Warren, Joe Biden and Pete Buttigeg made appearances on the picket lines.

“Now that this is over, we want the customers to come back,” Espinsosa said. “And we have to show a professional and courteous attitude. … We have to put together relationships that have been somewhat tarnished.”

Sources said Stop & Shop approached negotiations with a goal of maintaining its cost structure while addressing rising costs for healthcare. The retailer maintained its contracts had not kept pace with the rate of inflation for healthcare and that its program’s relative low costs and high quality led it to subsidize other employers by having worker spouses on Stop & Shop’s plan rather than their employers’.

Proposed contract offers Stop & Shop shared with workers called for increased associate contributions through the life of the deal and modified eligibility rules that would exclude spouses that have access to coverage through their own employers.

Over the weekend, union negotiators indicated they had made some progress at pushing back on increased deductibles, increased out-of-pocket maximums and increased prescription costs but it was not immediately clear what was ultimately agreed to.

Wages and pensions were also at issue in talks. While all workers would see compensation increases under Stop & Shop’s proposals, the increases would be in a form of bonuses for some workers. The company was also looking to change its policy for Sunday premium pay with an eye of lowering its costs over time. A proposed deal maintained the current time-and-a-half pay of current full-time workers but freezes Sunday and holiday premiums at current levels for part-time associates and would institute a phased-in flat $2-per-hour premium for new part-time associates.

Unions were also unhappy over employer proposals that would reduce pension benefits for newer employees, but it was not clear if or how those concerns were addressed in the proposed contract.

“Our associates’ top priority will be restocking our stores so we can return to taking care of our customers and communities and providing them with the service they deserve. We deeply appreciate the patience and understanding of our customers during this time, and we look forward to welcoming them back to Stop & Shop,” the Quincy, Mass.-based retailer said.

“Under this proposed contract, our members will be able to focus on continuing to help customers in our communities enjoy the best shopping experience possible and to keep Stop & Shop the number one grocery store in New England. The agreement preserves healthcare and retirement benefits, provides wage increases and maintains time-and-a-half pay on Sunday for current members,” the UFCW locals said in a joint statement.

“Today is a powerful victory for the 31,000 hardworking men and women of Stop & Shop who courageously stood up to fight for what all New Englanders want—good jobs, affordable healthcare, a better wage and to be treated right by the company they made a success.”