While shoppers continue to rate supermarkets highest for quality and variety among food retailers in terms of satisfaction and loyalty, Aldi is gaining clout as a growing competitive force, according to the latest findings of the Retail Feedback Group (RFG) 2019 U.S. Supermarket Experience Study.

Conventional grocery stores also earned the strongest overall satisfaction score in the Lake Success, N.Y.-based RFG’s 2019 research report, with a 4.31 on a five-point scale vs. Aldi (4.27) and Walmart (3.93).

However, in terms of overall value for grocery expenditures, Aldi nabbed the highest score, along with the highest overall satisfaction ranking during the peak traffic hours of 3 to 7 p.m. (4.30) when compared with supermarkets (4.27) and Walmart (3.98).

Shoppers surveyed for RFG’s annual consumer benchmark satisfaction study—which was based on a nationally representative panel of 1,200 grocery shoppers—rated quality/freshness of the food and groceries (4.44), store cleanliness (4.42) and item variety and selection (4.38) as the strongest core experience factors. Associate friendliness, which earned the highest service rating tabulation in the study, received a more moderate score of 4.32, followed by checkout speed/efficiency (4.28) and associate helpfulness/knowledge (4.24).

Associate availability and value for the money spent tied for the lowest score among all core experience factors (4.17), followed next by high price perceptions among shoppers for fresh produce (3.99), meat/poultry (4.00) and everyday prices (4.01), all of which received low scores in the supermarket channel. However, supermarkets’ advertised sale prices scored a much higher rating of 4.34 , which RFG principals say is important, because 73% of shoppers refer to one or more advertising/sales vehicles—including traditional print flyers, social, mobile and digital—before or during the visit.

“Value still remains a very important consideration for supermarket retailers, with more than 7 out of 10 shoppers referring to sales vehicles before or during the visit to the store,” said Brian Numainville, RFG principal. “While supermarkets receive the lowest scores on value for money spent, the good news is that advertised specials register as the strongest scoring pricing factor for supermarkets.”

While digital circulars (30%) continue to gain traction, print circulars remain popular with 51% percent of shoppers and more so with baby boomers (62%) vs. millennials (40%). However, Numainville said, “Digital coupons (33%) have now surpassed clipped coupons (29%) and are used across all age groups. Retailers need to remain attentive to the trends in their local markets to ensure they are communicating value using the vehicles most relevant to their shoppers.”

Aldi also scores strong among shoppers who are more likely to recommend it to others, with a Net Promoter Score of 44.7 compared to supermarkets (40.7) and Walmart (27.1). Additionally, 42% of those who’ve shopped at Aldi say they plan to shop there more frequently in the next 12 months vs. 22% for supermarket shoppers and 28% for Walmart shoppers.

In the realm of core experience ratings, Aldi shoppers assign value for money spent with the highest mark (4.51) vs. Walmart shoppers (4.32) and supermarket shoppers (4.17). With the exception of value for money spent, Walmart shoppers scored it lowest on the other core experience factors relative to supermarkets and Aldi. Numainville said it’s also noteworthy that Aldi has progressed into a tie with supermarkets on quality and freshness (56% “highly satisfied”), with Walmart trailing at 46%. 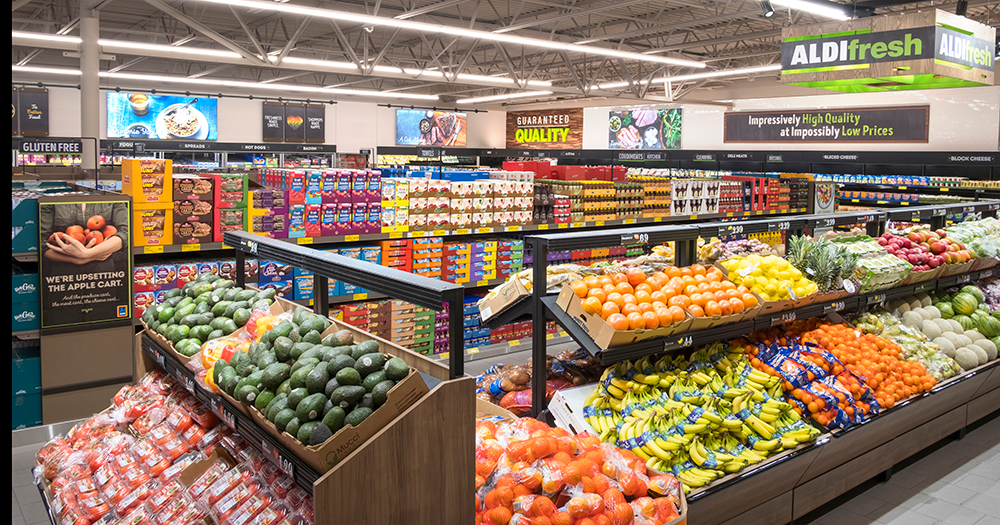 “Aldi continues to make inroads in competing against supermarkets with strong value for money spent and likelihood to recommend scores, as well as perceived improvement in quality, coupled with the highest [overall satisfaction peak] scores during the peak traffic period of 3 to 7 p.m.," said Doug Madenberg, RFG principal.

“As Aldi continues to remodel stores and expand into new locations,” he continued, “supermarkets need to step up their game in areas like staff availability and helpfulness, maintain leading scores in quality and variety, as well as focus operationally on improving satisfaction during high traffic time periods.”

Baby boomers outscore their generational millennial counterparts on nearly all core supermarket experience factors with the exception of value for money spent, which Madenberg said is scored similarly across all three generations. Additionally, boomers score supermarkets more favorably than both Gen X and millennials on other key factors, including quality, variety, and friendliness of staff.