Farm Fresh, once the biggest supermarket chain in Virginia’s Hampton Roads area, will be broken up and sold, putting to rest a long-speculated fate for the Supervalu division.

The news comes as little surprise, given Supervalu’s previously stated intention to reduce investment in certain corporately owned retail banners to instead focus resources on its wholesale business. Sales, market share and store traffic at Farm Fresh had been falling for some time amid a relative lack of investment and an onslaught of new competition in its market areas around Norfolk and Virginia Beach, where German hard-discounter Lidl has opened nine of its 50 stores in the area over the last year and drawn a strong competitive response from existing chains, making it one of the most price-competitive markets in the country.

Supervalu has also faced pressure from an activisit investor, Blackwells Capital, to pursue strategies that would increase return to shareholders, including exiting retail businesses. However, Supervalu spokesman Jeff Swanson told WGB that the sale announced Wednesday was “the culmination of ongoing work that began before we first heard from Blackwells last October.”

“Exiting the Farm Fresh banner will enable us to allocate greater resources and energy toward the strategic growth of our wholesale business,” Supervalu CEO Mark Gross said in a statement. “We also continue to aggressively pursue other important initiatives, including the monetization of real estate through sale leaseback transactions and cost reduction across the company. We are confident our efforts are driving growth and enhancing our competitive position.”

Supervalu said the announced deals would transfer the stores for $43 million in cash and that it expected the deals to finalize in May. Kroger will acquire 18 of the units, with 11 going to its Harris Teeter division and eight to its Mid-Atlantic division. Cincinnati-based Kroger runs those divisions separately.

It was not immediately clear whether the stores would be net gains or used as a combination of replacement units for Kroger.

In a statement, Danna Robinson, Harris Teeter’s communication manager, said the Matthews, N.C.-based division intends to finalize its remodel and re-opening plans while the stores are closed. Pharmacies at three of the purchased stores will remain open throughout the transition.

“Farm Fresh has a long tradition of operating in Hampton Roads,” Robinson said. “These stores make this an especially attractive transaction for Harris Teeter.  We plan to invest in remodeling a number of these locations to better serve our shoppers, and we look forward to continuing to expand our offerings to our Hampton Roads neighbors.”

Ahold Delhaize’s Food Lion banner is separately buying three units and said it intended to convert them to its banner after the deal closes in May.

Farm Fresh was founded in 1957, and through organic store growth and a series of acquisitions, grew to the largest chain in the Hampton Roads area. After a 1997 bankruptcy, Farm Fresh was acquired by its wholesaler, Richfood Holdings, which was subsequently acquired by Supervalu.

Under Supervalu, Farm Fresh had been experiencing same-store sales declines for several years, which sources attributed in part to additional competition in the fast-growing area and relative lack of investment. However, the stores’ sales volumes were an important element in maintaining wholesaling capacity for Supervalu, officials had said. A year ago, Supervalu consolidated operations between Farm Fresh and its Bowie, Md.-based sister Shoppers Food & Pharmacy, eliminating 21 of 44 Farm Fresh merchandisers.

It was not immediately clear what, if any, implications exiting the Farm Fresh banner would have on Shoppers, but sources said they believe the chain also is among those Supervalu said recently would be “run for cash,” with minimal capital investment as Supervalu focuses its resources on wholesaling and on the retail chains it feels it can still grow, such as Cub Foods in the Midwest. Swanson declined comment on a question about future plans for Shoppers.

Supervalu’s 200 retail stores in the recently completed fourth quarter posted sales of $1 billion, with same-store sales down by 3.5%. 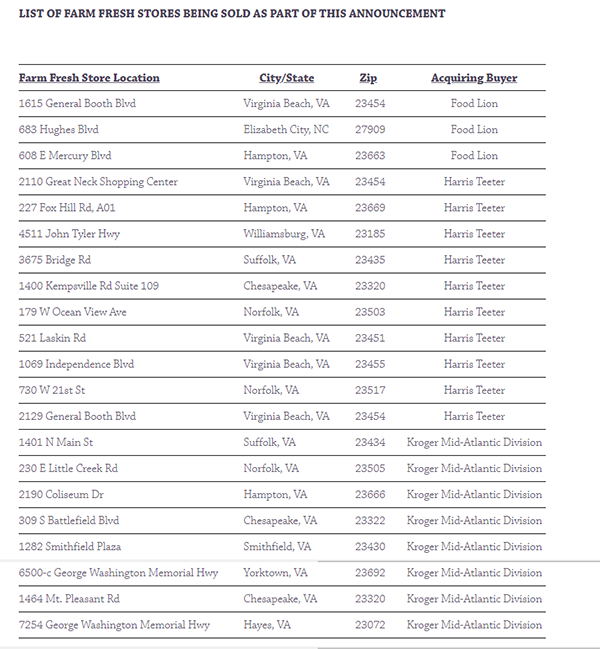