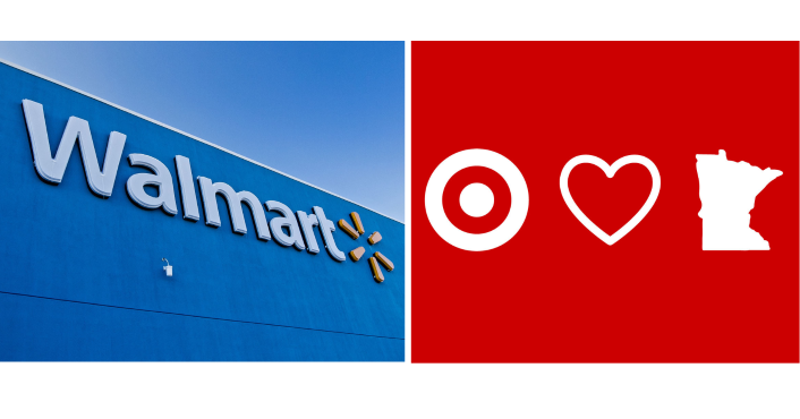 If you heard a low whistle on May 18, it could have come from someone checking out Walmart's ($WMT) or Target's ($TGT) stock performance for the day.

After Target said in the morning that its margins were "well below expectations" despite higher-than-expected (3.3%) comp sales growth in the first quarter—a storyline similar to Walmart's in its own earnings release a day earlier—shareholders reacted sharply, shedding Target shares until the company's stock price closed down more than $53, or 25%, for the day. Walmart, after sinking more than 11% on May 17, lost an additional 6.8% on May 18, closing the day down $8.92 to $122.43.

The whiplash followed acknowledgements from executives of both companies that operating conditions proved worse than expected in the year's first fiscal quarter. For example, Target COO John Mulligan said on the Minneapolis-based retailer's first-quarter earnings call, "Coming into this year, we anticipated we’d see continued tight conditions and elevated costs in freight markets." However, "the actual conditions and costs have been much more challenging than expected," with freight and transportation costs in the year's opening quarter totaling "hundreds of millions of dollars higher than our already-elevated expectations." For the full year, he said, Target is now anticipating approximately $1 billion in incremental freight costs.

Target and Walmart also were affected by shifts in U.S. consumer spending as inflation continued to accelerate—particularly in food and fuel. Walmart said gasoline costs spiked faster than it was able to pass through price increases, and both retailers said that they had seen consumers move spending away from discretionary categories such as home goods to groceries.

For Target, that shift especially left a lot of bulky inventory lying around—e.g., outdoor furniture and kitchen appliances, to name two affected categories. And rather than push all of that excess inventory onto store floors, creating a more-cluttered shopping experience for guests, Target made what leaders said was a tough decision to hold excess inventory in storage facilities and take markdowns in store to gradually sell down stocks.

Further, said Target Chairman and CEO Brian Cornell, while the company anticipated a spending shift after lapping stimulus spending in the year-ago period, "we didn’t anticipate the magnitude of that shift."

Walmart President and CEO Doug McMillon said one unanticipated pressure for the Bentonville, Ark.-based retailer—the country's biggest grocery retailer—stemmed from nearly all associates who had been out on COVID leave returning to work within a short time span in February. Their flooding back into stores created weeks of overstaffing, McMillon said—a problem that has since been resolved but had a real impact.

Walmart's harsh reality check prompted the company to update its full-year financial guidance, lowering its estimates for full-year earnings per share from a percentage increase in the mid-single digits to a decrease of about 1%. "We need to do more to control costs," Walmart U.S. CEO John Furner told investors and analysts.

In Target's previous earnings call at the beginning of March, Cornell said that the company's performance in the fourth fiscal quarter had "capped off a year of record growth in 2021, reinforcing the durability of our business model and our confidence in long-term profitable growth."

On May 18, noting that "we don’t see current conditions improving right away," he offered this: "We have a lot of work ahead of us to restore profitability."