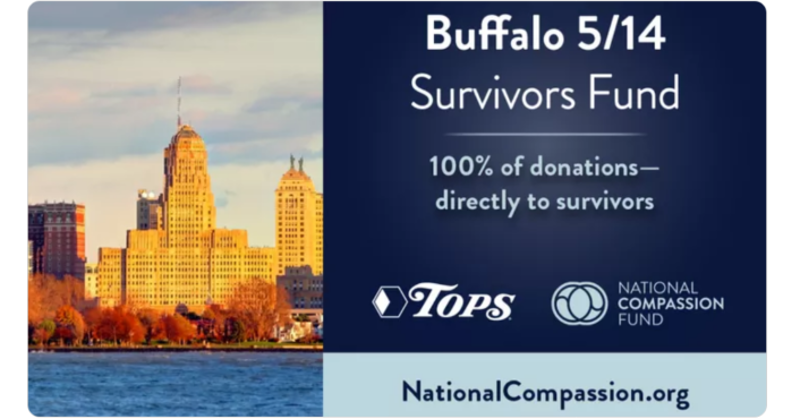 On a day that saw President Joe Biden and first lady Jill Biden in New York to honor those killed in the May 14 racially motivated shooting at a Tops Friendly Market in Buffalo, Tops announced the creation of a new fund for families of the deceased.

The Buffalo 5/14 Survivors Fund, created by Tops in partnership with the National Compassion Fund, will "provide direct financial assistance to the survivors of the deceased and those directly affected by this tragedy," Tops said in a news release. Tops is seeding the fund with $500,000; those wishing to make an online contribution can do so at the Buffalo Survivors Fund page on GoFundMe.com.

One hundred percent of contributions to the fund will go to affected families and individuals, including those injured in the shooting "and those who were present in the store and experienced psychological trauma," added the grocer, which operates more than 150 stores in New York, Pennsylvania and Vermont. Thirteen individuals were shot, 10 fatally, at the Jefferson Avenue store in a predominantly Black neighborhood of Buffalo.

"What happened was ruthless and heartbreaking," Tops Friendly Markets President John Persons said in the news release. "Those that lost their lives will forever be in our hearts and will never be forgotten." He continued: "Tops is committed to supporting those families affected and to help the community grieve and heal from this tragic event. We have been overwhelmed by the outpouring of support, and we thank everyone for their incredible kindness."

Responses continued to come in from others in the grocery community early in the week, with Rochester, N.Y.-based Wegmans saying it was "outraged by yet another act of hatred perpetrated against the Black community" and that it joined Tops in grieving the lives lost in the unbearable act of violence.

"To know this happened at a company with whom we share a love of service, and love for our shared Buffalo community, is nothing short of heartbreaking," Wegmans said in a statement. Wegmans said it was working with Buffalo Peacemakers, FeedMore WNY and United Way to support affected communities.

Earlier in the week, Grand Rapids, Mich.-based SpartanNash offered, "We stand by and support our grocery industry brothers and sisters at Tops Markets, and we are heartbroken that these front-line heroes and innocent shoppers have been affected by violence

St. Paul, Minn.-based National Co+Op Grocers (NCG) said in a May 16 statement that "(from) one grocer to another, we extend solidarity and empathy to the staff and shoppers of Tops Market on Jefferson." Added the grocer: "We applaud Tops Market for its efforts to support its shoppers and staff during this time, and although we are competitors in business, we stand together in community." NCG called on other companies "to join us in standing against the continued spread of racially based oppression, intolerance and violent extremism."

In Buffalo on May 17, Biden called on all Americans to reject white supremacy, saying, "The venom of the haters and their weapons of war, the violence in the words and deeds that stalk our streets, our stores, our schools—this venom, this violence cannot be the story of our time."

"We have to refuse to live in a country where Black people going about a weekly grocery shopping can be gunned down by weapons of war deployed in a racist cause," Biden continued. "None of us can stay in the sidelines. We have to resolve here in Buffalo that from the tragedy—this tragedy—will come hope and light and life."