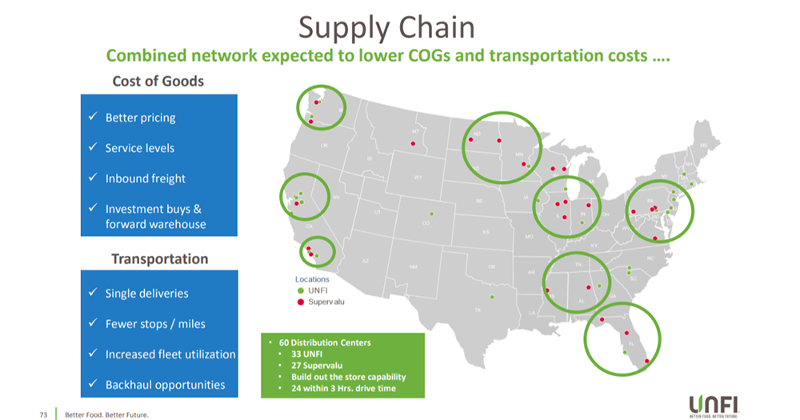 United Natural Foods has announced plans to optimize its food distribution network in the Pacific Northwest as it combines facilities belonging to it and its newly acquired counterpart Supervalu.

The move contemplates building a new distribution center in Centralia, Wash., and more than doubling the size of an existing facility in Ridgefield, Wash., while closing existing centers in Tacoma, Wash.; Auburn, Wash.; and Portland, Ore., after the new facilities are complete.

“The construction of Centralia and expansion of our Ridgefield facility represents the first significant step in our optimization of UNFI’s [distribution center] network following the acquisition of Supervalu, allowing us to better serve all our customers throughout the Pacific Northwest,” said Steve Spinner, UNFI chairman and CEO, in a statement. “These are two tremendous facilities that, once complete, will provide a great working environment for our associates, an improved and efficient layout for inventory management, optimized logistics route planning, and an ability to help us deliver on the long-term synergy goals we outlined as a part of the Supervalu acquisition.”

UNFI has said its revamped network would optimize a group of 60 distribution centers (33 UNFI centers and 27 belonging to Supervalu) created in the Supervalu combination, primarily by dividing facilities among fast-moving mainstream groceries and fresh foods, and slower-moving natural, organic and specialty items. The distributor had significant capacity in the Pacific Northwest in part because Supervalu had acquired competitor Unified Grocers prior to being bought by UNFI.

UNFI said it has entered into a long-term lease agreement with a developer in Centralia to construct a 1.2-million-square-foot distribution center exclusively for UNFI on approximately 77 acres at 4002 Galvin Road. In Ridgefield, the company will expand an existing 232,000-square-foot facility by 541,000 square feet to provide capacity for its growing customer base in the natural, organic and specialty channel. This facility will deploy a warehouse automation solution that supports the company’s slow-moving SKU portfolio, UNFI said.

Both the Centralia and Ridgefield facilities are expected to be fully operational in the second half of 2019, with customer transition completed in early 2020.