Officials of United Natural Foods Inc. spoke for more than three hours about their vision for the company now that it has acquired its conventional rival, Supervalu. Two hours in, its stock was up by nearly 30%.

Needless to say, investors were pleased with what they heard, with many appearing to rejoin a stock they’d abandoned late last year amid questions as to the company’s financial outlook and its plans for digesting the $2.9 billion acquisition of its larger rival.

“They made a very credible case that there is value in buying Supervalu,” analyst Andrew Wolf of Loop Capital, Chicago, told WGB. “Financially, they were very bullish relative to expectations.”

During the presentation, held Jan. 16 in Orlando, UNFI officials provided investors the reassurance they needed, projecting compound annual sales growth of 3.6% and EBITDA (earnings before interest, taxes, depreciation and amortization) growth of 7% through fiscal 2022, and reiterating expectations that the Supervalu deal would reel off more than $185 million in synergies over that period. UNFI also revealed plans to reduce its debt leverage by more than half over that period.

Enabling all that will be what UNFI CEO Steve Spinner described as the nation’s most diversified wholesale food distributor, capable of providing retail customers with conventional, natural/organic and specialty products, as well as fresh foods, deli and private brands, along with the capability of delivering services for customers nearly anywhere in the U.S. This, Spinner said, will be vital for retailers as competitive and cost pressures will increasingly favor scale as the natural and conventional worlds further converge, positioning the new UNFI to lead the change.

“We have a once-in-a-lifetime opportunity to build a big, profitable, transformational company,” Spinner said. “There are not a lot of times in your career when you can do something this transformational as this … and have this kind of positive influence. I think for the most part, it’s going to be fun.” 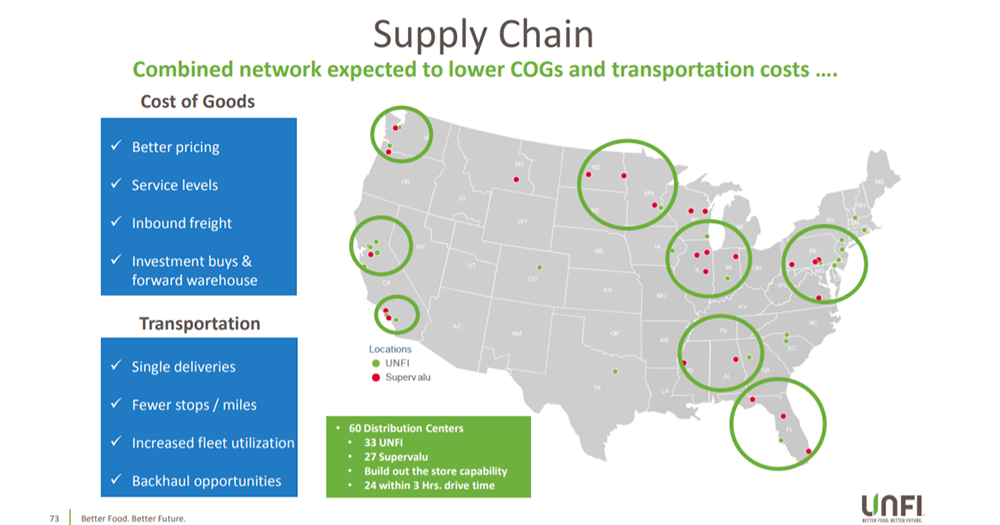 Highlights of the presentation included:

Wolf acknowledged that realizing UNFI’s ambitions would require “a lot of execution,” but added, “this isn’t the gang that couldn’t shoot straight. UNFI going back 10 years has proven they can do things like this.”

Chris Mandeville, an analyst with Jefferies, New York, was more circumspect. In a note to clients, Mandeville advised investors to wait and see how execution commences, and noted in his opinion that Supervalu was “in complete disarray,” with underwhelming projections for sales growth and remaining questions about margin stability.