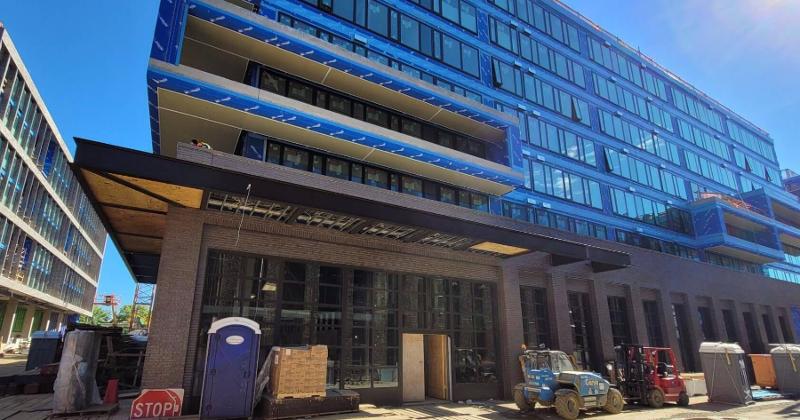 While new Wegmans stores have historically met with fanfare on opening day, the Rochester, N.Y.-based grocer is building excitement well in advance of its next store set to open in spring 2022 in Carlyle-Alexandria, Va. A recently posted time lapse video on its website shows construction progress on the 81,300-square-foot store located off Interstate 495 at the Eisenhower Ave. exit, just outside of Old Town Alexandria.

The new store, which features two levels of parking below and residential units above, will be part of Carlyle Crossing, a 1.7 million-square-foot development including commercial, residential and retail facilities just steps from the Eisenhower Ave. metro stop.

Wegmans began accepting applications for the Alexandria store, its 14th in Virginia, last month. The grocer says it plans to hire 450 employees, including entry-level management, team leaders, shift leaders and culinary professionals such as line cooks, to become a part of the Carlyle team.

Two additional Wegmans are planned for 2022 openings, including its first store in the city of Washington, D.C., for which it seeks to hire 450 employees and is currently accepting applications. Scheduled for a summer 2022 opening, the store on Wisconsin Ave. is located at the former site of Fannie Mae’s headquarters, a large mixed-use development called City Ridge. To make way for its 84,000-square-foot store and three levels of underground parking, the existing historic building was jacked up by millimeters so new columns could be put in place before it was set on a new foundation, says the grocer.

“The developer, Roadside Development, was required to preserve the historic nature of this building and therefore had to be very creative,” said Ralph Uttaro, Wegmans SVP of real estate and development, on the company’s website. “We’re very happy with the way everything is coming together and we’re looking forward to opening our doors next summer.”

The final opening of 2022 is scheduled for next fall in Wilmington, Del. Following Wegmans’ more traditional suburban design, this location will be about 84,000 square feet. The store is its first in the state of Delaware, located just outside the city of Wilmington. It will be the anchor in a mixed-use development with other retail stores, offices, townhomes and apartments.

As the grocer only opens two or three stores each year, pent-up demand among “Wegmaniacs” hoping a new store will come to their area is common. The grocer, which says it receives more than 7,500 requests for new store sites in cities and states across the country each year, shared more about its location-scouting process on its website.

“We serve customers in the area that immediately surrounds our stores, but we are also a destination,” said Uttaro. “Therefore, we look for great regional locations that are easy to find and easy to get to. We also examine density of population and demographics surrounding the site.” Opening a limited number of stores each year also helps with the hiring process, continued Uttaro, adding, “This gives us plenty of time to design the store, finish construction, and hire and train our people.”

Proximity to its distribution centers is another major consideration. With distribution hubs in New York and Pennsylvania and one in the planning stages in Virginia, Wegmans says it can service potential stores in most of the northeastern and mid-Atlantic states. Indeed, much of Wegmans’ recent expansion efforts have been focused on the Mid-Atlantic region.

So where does that leave Florida? While Wegmans has received 287 requests this year for Wegmans to move into the Sunshine State, the grocer says distributing product to Florida would be “cost-prohibitive at the present time.”

Wegmans adds that it also takes the size of a potential site into consideration. Its traditional suburban stores are between 80,000 and 120,000 square feet, requiring 15 to 20 acres of land to accommodate the store and adequate parking space.

More recently, Wegmans has moved into sites it considers less traditional—densely populated urban and inner-ring suburban environments like its new store slated for Carlyle-Alexandria. In 2014, it opened one of its first urban-style locations in Chestnut Hill, Mass. At 80,000 square feet, the store was one of the smallest it had opened in decades, but the model proved successful and prompted the grocer to open stores in Brooklyn, N.Y., in 2019, and in Tysons Corner, Va., in 2020. All of these sites are located in mixed-use developments with multi-level parking garages.

“The store development process is lengthy, but rewarding, from identifying the best location to opening day,” said Uttaro. “It’s a great feeling to bring the Wegmans experience to a whole new community of customers.”

Looking further ahead, Wegmans is planning a new store in Manhattan, scheduled to open in the second half of 2023. The store at Vornado Realty Trust’s 770 Broadway—the former site of the Astor Place Kmart—will mark the second New York City location for the Rochester, N.Y.-based grocer.