Walmart’s message to shoppers will remain strongly focused on saving them money but will be increasingly accompanied by an effort to save them time, Chief Marketing Officer Tony Rogers said during a presentation at the retailer’s ongoing Shareholders Week event in Bentonville, Ark.

Citing consumer research it conducted last year, which indicated that shoppers’ need to save time was “all-consuming” and “every bit as important as their need to save money," Rogers said Walmart is evolving its practices and marketing to better reflect empathy for customers’ time. This includes introductions of new technologies designed to remove friction from the in-store shopping experience and from online returns. 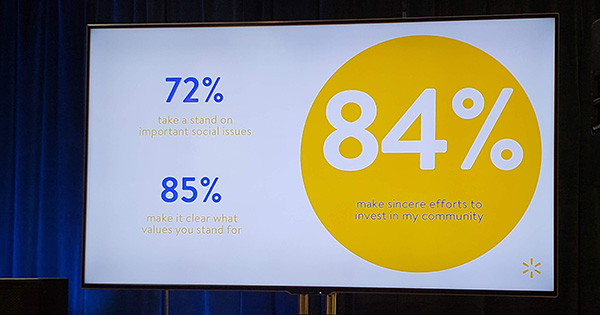 The company is currently testing a technology called Item Finder as part of its mobile application, which will direct shoppers to the location of any item in a store. Another new app feature simplifies the return process by allowing shoppers to alleviate pain points typically associated with in-store returns.

Item Finder is expected to be rolled out in all stores later this year.

“Technology will be our friend when it comes to the store experience,” Rogers said. “You’re going to see us  increasingly trying to drive the customer to a behavior of interacting with us through an app in order to take friction out of the process.”

Rogers said the consumer desire to save time was reflective of changes in lifestyles that often move faster than retailers can change. The mobile phone—key to enabling many of the technologies that provide convenience to shoppers and bridge the physical and digital retail worlds—plays a paradoxical role in contributing to consumers’ time constraints, he said.

For example, he said, 27% of households have a single parent, and 61% are two-parent households where both parents work. “So in just about every household, all of the parents are working, so they are juggling the needs of work with their kids—all the while dealing with the fact that the boundaries between work and the rest of their lives have now blurred,” Rogers said. “You have this [mobile phone and] you’re never really off the clock any more.”

Rogers said Walmart’s Online Grocery Pickup—now in more than 2,100 stores—is “just about the best thing we have in our company right now when you think about saving people time and money." It's now a large enough business to support a national advertising campaign that consumers will see this summer, he said. Grocery delivery, expected to reach about 40% of U.S. households by next year, will be marketed behind an effort to highlight "personal shoppers."

“As people decide who we want to do business with, we think it’s important to be out there letting people know what our stance is on the issues of our time,” he said.

Walmart’s awakening to the need to highlight its ability to affect positive change dates back to its experience in donating resources to communities ravaged by Hurricane Katrina. Last year, when storms affected Texas and Florida, Walmart was able to raise $70 million in relief through an offer to match contributions made by its shoppers.

“If Hurricane Katrina taught us that the role we were going to play on the world stage was going to be different, what the hurricanes last year taught us is the power of doing good in conjunction with our customers,” he said.

Asked about how the brand perception was trending overall, Rogers highlighted that it was scoring best among millennials.

“Millennials have grown up. They have kids now, they have houses and they have families, and that puts them in a very important life stage with us,” he said. “The need to save time and save money, that’s where millennials are right now. What we’re seeing is millennials are the highest scoring group for us from a reputation standpoint.”