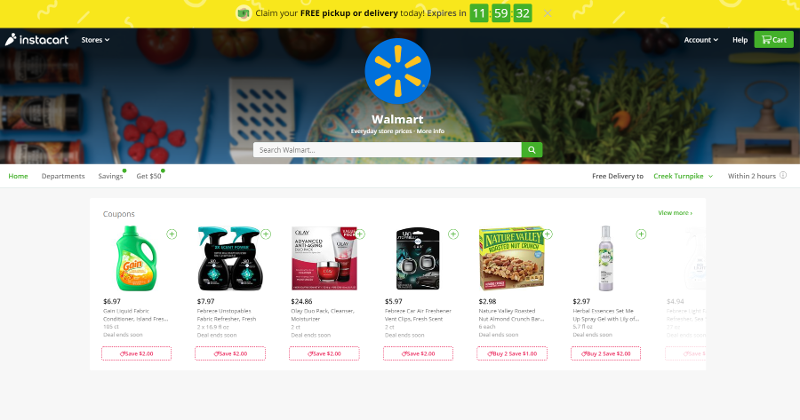 In a move to colonize one of the last islands of U.S. food retail it had yet to plant its flag, Instacart this week said it has launched its marketplace service from U.S. Walmart stores in select markets.

The service is now available in three California markets—San Francisco, Los Angeles and San Diego—as well as in Tulsa, Okla.

Retailers on the Instacart marketplace can be selected to shop from by consumers using the Instacart app or web page. The orders are both shopped for and delivered by contract workers of Instacart, the San Francisco-based concierge. Walmart sets the prices on the items offered and are “generally” the same as in-store, according to the Instacart web page.

“The new partnership brings thousands of items—from groceries, alcohol and pantry staples to home decor and improvement, personal care, electronics and more—at everyday low prices from Walmart stores to customers’ doors in as fast as an hour,” an Instacart spokesperson said in an email to WGB. “Customers in these areas can shop from all of their favorite Walmart aisles online and an Instacart personal shopper will pick and deliver the orders. We’re proud to partner with one of the most beloved retailers in the world and help connect more customers to Walmart.”

Instacart provides online ordering for more than 400 national, regional and local retailers across North America and delivers from more than 30,000 stores. It previously launched with both Walmart’s Sam’s Club stores in the U.S. and at Walmart stores in Canada.

While building its own suite of fulfillment options, Walmart has made any number of partnerships with third parties to facilitate delivery. The addition of an Instacart option could be a seen as a defense against Amazon, which is at work to expand its footprint in food retail through Prime delivery at Whole Foods stores, its Amazon Fresh offering and a forthcoming grocery store chain set to debut in Southern California.

California is one of the few states where Walmart has yet to seek drivers for its Spark delivery program, which facilitates deliveries from Walmart stores using so-called gig workers.

Tulsa by contrast is a strong market for Walmart, with share of 48%, according to Metro Market Studies 2019 guide. There, Instacart could help support other delivery options, including Spark.