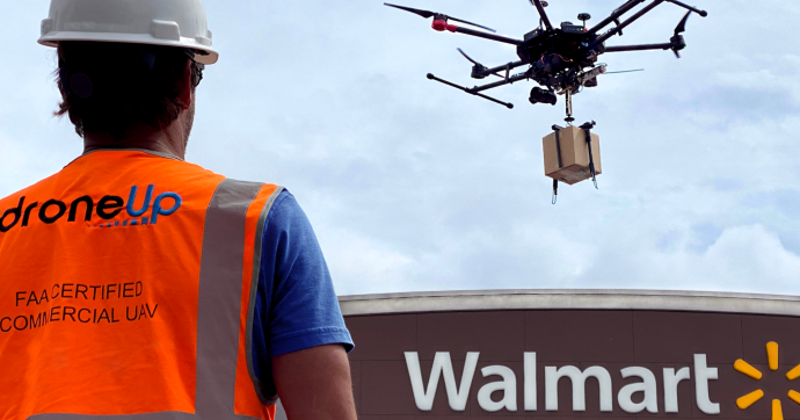 Walmart is deepening its partnership with DroneUp, a Virginia Beach, Va.-based drone services provider, announcing an investment in the company as Walmart seeks to build out its last-mile delivery services.

Last fall, Walmart teamed with DroneUp to test drone delivery of at-home COVID-19 test kits to customers in North Las Vegas. That test proved drone delivery's potential to get online orders to customers "in minutes vs. hours," Walmart U.S. President and CEO John Furner wrote in a post on the company's website. Now, hundreds of successful drone deliveries later, he wrote, Walmart is stepping up its commitment to DroneUp. Furner and Walmart did not disclose the size of the DroneUp investment.

"Conducting drone deliveries at scale is within reach," Furner wrote. He stated that the company's nation-spanning physical infrastructure—its network of 4,700 stores positioned, as Walmart likes to point out, within 10 miles of 90% of the U.S. population—positions Walmart well to make drone delivery a workable last-mile option.

DroneUp isn't the first company with which Walmart has taken to the skies: In September, the retailer announced a pilot (or, rather, pilotless) project with Israel-based drone company Flytrex for drone delivery in Fayetteville, N.C. Less than a week later, Walmart said it was working with Zipline to test drop delivery of pharmacy items via small unmanned planes. (Zipline, which was founded with a focus on delivery blood supplies, according the company's website, last week announced a partnership with Pfizer on delivery of the pharmaceutical manufacturer's COVID-19 vaccine.)

DroneUp, founded by a former military officer and former White House adviser on emerging technologies, boasts that it has a database of more than 10,000 Federal Aviation Administration (FAA)-certified pilots. "Since partnering with DroneUp last year, we’ve valued their technological expertise, world-class operations and experienced management team—and their commitment to helping the FAA ensure the highest levels of safety with every delivery," Furner wrote.

Last-mile is a primary focus for Walmart, Furner noted. In April, the Bentonville, Ark.-based retailer invested in San Francisco-based self-driving car company Cruise after successful tests of home deliveries from Walmart stores around Scottsdale, Ariz. And beyond delivery to doorsteps, Walmart is working on in-home delivery—with humans providing the final touch on that service.