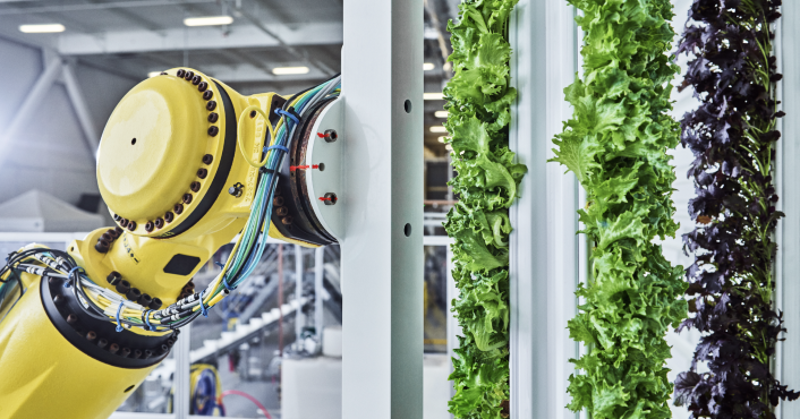 Walmart is betting big on vertical farming: The Bentonville, Ark.-based retailer on Jan. 25 announced an investment in Plenty, an indoor farming company based in South San Francisco.

Under the terms of the long-term agreement, Walmart will be able to start sourcing leafy greens for all of its California stores from Plenty's farm in Compton, Calif., later this year. Walmart also will join Plenty's board of directors.

The investment is part of a $400 million Series E funding round for Plenty, one of several players in the burgeoning field of indoor farming. It's a big vote of confidence in Plenty, too: While other indoor farming specialists have raked in large investments from tech ventures, celebrities (including celebrity chefs) and other institutional and individual investors—New York-based Bowery Farming raised $300 million in a Series C round last year—Plenty is the first to land investment backing from as big a retail name as Walmart.

"We believe Plenty is a proven leader in a new era of agriculture, one that offers pesticide-free, peak-flavor produce to shoppers every day of the year," Walmart U.S. Chief Merchandising Officer Charles Redfield said in a news release. "This partnership not only accelerates agricultural innovation but reinforces our commitment to sustainability by delivering a new category of fresh that is good for people and the planet."

Plenty touts its use of modular growing system that allows for cultivation of multiple crops on one platform. The company said its farms "use just 1% of the land required by traditional farming while improving yields 150-350 times per acre." In August 2020, the company announced a distribution agreement with Albertsons Cos. to provide its produce in more than 300 Albertsons-owned stores in California.

Walmart, further detailing the potential it sees in Plenty, stated in its news release: "Backed by one of the largest U.S patent portfolios in the industry, Plenty’s proprietary tech meaningfully improves on traditional agriculture’s use of water and land. By building their farms closer to the consumer, Plenty helps reduce transportation and food waste, keeping items fresher for longer in 100% recyclable product packaging."

Plenty's latest investment round was led by new investors One Madison Group and JS Capital. One Madison Group Chairman and CEO Omar Asali, in a news release from Plenty, characterized the indoor farming sector as "at an exciting inflection point," and said Plenty has "truly 'cracked the code' on the technology and economics of indoor farming." The company, Asali continued, "has developed an innovative and scalable model that can deliver fresh, sustainable produce to retailers, growers and governments anywhere in the world."

Plenty CEO Arama Kukutai called Walmart's investment "a game-changer for the agritech industry." Having the company's backing, he said, "demonstrates the rising importance of indoor agriculture to the future of fresh."