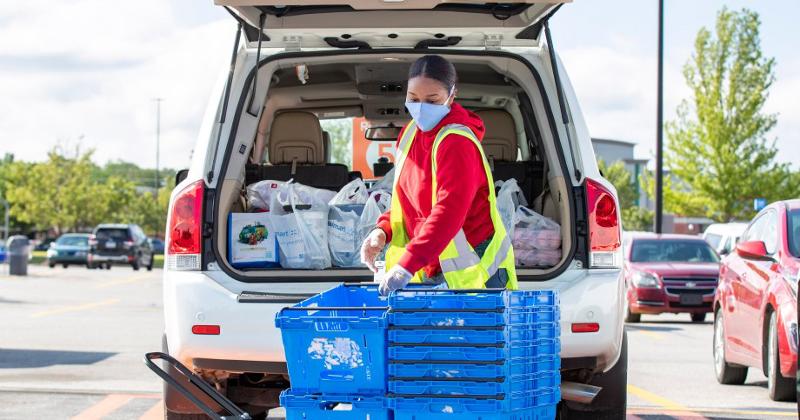 Walmart’s second-quarter financial results exceeded estimates of an uncertain market behind a strong performance in e-commerce and stimulus-sparked consumer spending on hard goods and apparel, helping to overcome a decline in traffic to stores and improving overall profits.

For the 13-week period ending July 31, the Bentonville, Ark.-based mass merchant said U.S. sales increased by 9.5% to $93.3 billion, while comps improved by 9.3%, reflecting a 27% increase in average basket size, and a 14% decline in store traffic. E-commerce, which grew by 97% in the quarter, contributed 600 basis point to the comp figure.

Grocery comps were up by mid-single digits, also boosted by soaring “all-time high volumes” through the company’s pickup and delivery services. Fresh food comps increased in the high single digits.

General merchandise sales—initially hit hard by the coronavirus crisis—rebounded in the quarter behind federal stimulus spending, recording comps in the “mid-teens,” Walmart said. The retailer called out strength in apparel, electronics, outdoor living, lawn and garden, and sporting goods.

Walmart said shoppers continued to consolidate trips with larger average baskets and shifted more purchases online. Federal stimulus money helped to get the quarter off to a strong start, and sales “normalized” into July, when comps were running around 4%.

Stimulus spending helped the margin mix with fewer markdowns and increased sales of higher margin items. The profitability of e-commerce sales also improved in the quarter on the mix of sales and faster growth of sales among third-party sellers on Walmart’s digital channels. U.S. gross profit rate in the quarter was up by 42 basis points.

Adjusted earnings per share of $1.56 far exceeded a $1.25 expected by Wall Street. Analysts acknowledged some market anxiety over the potential for Walmart to lose market share vs. more convenient peers in conventional grocery, citing among other things, credit card spending data and interpreting a recent round of corporate job cuts as a signal of cost-cutting measures in reaction to slower sales.