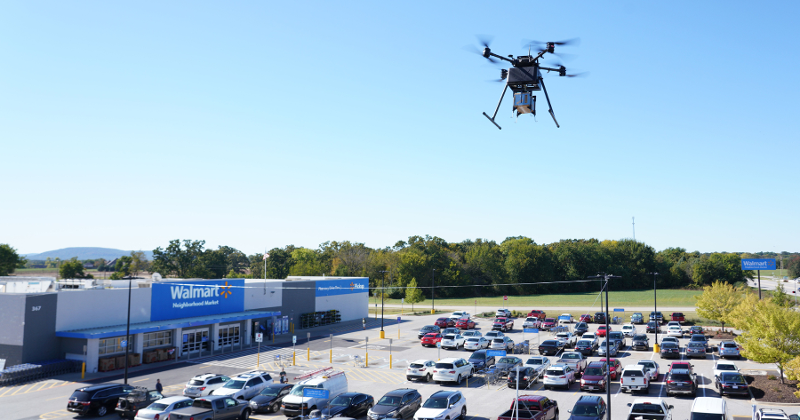 Walmart is building up and building out its partnership with Virginia Beach, Va.-based DroneUp, saying that as many as 4 million households in six states will be able to get their Walmart.com orders delivered by drone by the end of the year.

In a news release May 24, the Bentonville, Ark.-based retailer said it is adding 34 new sites for drone delivery service in 2022, with drone delivery powered by DroneUp reaching Walmart customers in Arizona, Arkansas, Florida, Texas, Utah and Virginia by year's end. The expansion will enable Walmart to deliver more than 1 million packages by drone in a year, the retailer stated.

"Between the hours of 8 a.m. and 8 p.m., customers will be able to order from tens of thousands of eligible items, such as Tylenol, diapers and hot dog buns, for delivery by air in as little as 30 minutes," Walmart SVP of Innovation and Automation David Guggina wrote in a Walmart blog post. For a $3.99 drone delivery fee, Guggina said, "customers can order items totaling up to 10 pounds, so simply put, if it fits safely it flies."

Last June, Walmart announced it was investing in DroneUp, with which it had tested drone delivery of COVID-19 test kits to households in North Las Vegas in late 2020. The successful pilot, according to Walmart U.S. President and CEO John Furner, proved drone delivery's potential to get online orders to customers "in minutes vs. hours." In November, Walmart said it was launching drone delivery from three Walmart stores in Northwest Arkansas.

Now, wrote Guggina, "We’ve seen firsthand how drones can offer customers a practical solution for getting certain items fast." More important, he added, is that the service has received a positive response from Walmart customers who have tried it. "In fact, while we initially thought customers would use the service for emergency items, we’re finding they use it for its sheer convenience, like a quick fix for a weeknight meal," he continued. "Case in point: The top-selling item at one of our current hubs is Hamburger Helper."

Walmart will also make its drone network available as a service to local businesses, Guggina noted, offering aerial photography to construction firms, real-estate businesses, insurers and emergency response providers, for example. Revenue from that business will help offset the cost of drone delivery of Walmart.com orders, according to the company.