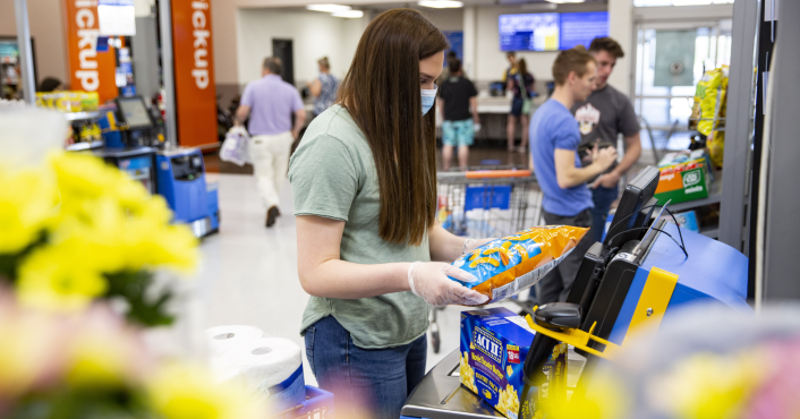 Consumers overall are feeling good, have money to spend, and haven't abandoned preparing meals at home the way some feared would be the case as restaurants, offices and schools reopened more fully, Walmart's top leader told an audience at a global retail conference last week.

That's all good news for the country's biggest grocery retailer, which last month said it had gained market share in grocery during the second fiscal quarter (with comps up a higher-than-expected 5.2%). But amid unprecedented supply-chain disruption, the big question heading into the fall and winter holiday shopping season—and as the last months of hurricane season give way to winter's unpredictability—the big question is how well Walmart will be able to deliver this year on its "whatever you want, when you want it" promise.

Even with inventory levels up 20% over where they were at the end of last year's fiscal second quarter, "We've got room to improve," Walmart Inc. President and CEO Doug McMillon said at Goldman Sachs' annual Global Retailing Conference on Sept. 9. Earlier this year, as winter storms walloped the country and Walmart fulfillment teams worked to manage surging online orders, Scott Mushkin, CEO of R5 Capital, called the retailer's stockouts at the time "rampant and bizarrely inconsistent" and said Walmart's supply-chain woes constituted a "virtual emergency."

Much has changed since this past winter, and investments in distribution centers, microfulfillment centers and the staff to run them are a top priority for the company. Still, "We need more capacity through our supply chain," McMillon said at the Goldman Sachs event Thursday, calling this year's supply-chain challenges "more dramatic than [anything] I can remember." And while much of the costly port disruption that the Bentonville, Ark.-based retailer is seeing affects hardline goods, not grocery, North American supply-chain players from farms to freight carriers are under pressure, too—creating a need for greater flexibility to be able to get fresh foods in the quantities and quality that Walmart stores need, McMillon indicated.

In produce, for example, "There's a lot to sourcing quality and having a relationship directly with the right growers and planning out ahead of time and driving innovation in a number of different ways ... and it all has to land in a beautiful presentation in the stores," he noted.

McMillon had praise for Walmart's dry goods and consumables team for their work around product innovation, pricing and inventory management. But produce, meat and dairy still have room for improvement, he suggested.

"We'd like for our beef program to be stronger," he said, adding that Walmart has made some moves—such as the launch this summer of the private-label McClaren Farms angus-beef line—to set the stage for growth in that category. Walmart's milk-processing plant Fort Wayne, Ind., which opened in 2018 in Walmart's first foray into food production, has lent the retailer a lift, too, McMillon said.

Overall, he said, "There's just a lot of need to be in the moment and to manage a fluid situation and not get stuck in your ways or have certain requirements if that means you're not going to have the inventory that you need."

That's especially true in the strong consumer environment that Walmart sees. With wages rising for higher-earning and lower-earning workers alike and many consumers still enjoying a bump from earlier pandemic stimulus payments and lower 2020 spending on things like transportation and travel, the overall U.S. consumer is likely to be "strong for some time," McMillon said.

"Consumers are feeling pretty good, and they're spending money," he said. "And we don't see an abrupt stop to that ... [T]here are going to be a lot of people with plenty of spending capacity."

That means a healthy appetite for holiday get-togethers and gift-giving, combined with higher-than-ever consumer expectations for convenience and order fulfillment flexibility as the COVID-19 pandemic itself remains in flux. "We see a lot of opportunity going forward to add things to the stores and keep them fresh," McMillon said. And Walmart's work to become more nimble has McMillon ultimately confident that the company is better positioned than ever to respond to whatever curveballs the rest of the year brings.