“In fashion,” Heidi Klum famously remarks on her "Project Runway" series, “one day you’re in—the next, you’re out.”

In case you’ve never watched, the German supermodel offers this reminder prior to informing the reality show’s hopeful designer contestants about their latest assignment—and requisite need to bring their A-game, lest they get sent packing from the competition with a sympathetic “auf wiedersehen” from Klum.

You don’t have to be Michael Kors to recognize a parallel pattern cut into the food retail field, where it appears Lidl is struggling to ascend from the runway into the mainstream.

As I first reported in Winsight Grocery Business, Lidl has slowed its stateside expansion while it concentrates on retooling the attractive but inefficient, and in some cases, poorly located sites where it made its debut. It’s likely future U.S. stores will be smaller in size and with tighter assortments, reflecting the lessons learned from its opening months.

Reports out of Europe late last week essentially confirmed this, although they took on an added gravitas courtesy of fresh remarks from parent Schwarz Group’s leader Klaus Gehrig, who told the business publication Manager Magazin: “If you recognize a mistake, you have to correct it.” The report also noted the Esmara clothing line designed for Lidl by Heidi Klum hadn’t made its expected impact, and that Lidl U.S. would open just 20 new stores in 2018, which would put it well behind the company’s projections that “up to 100” new stores would open by June, the one-year anniversary of its U.S. debut. 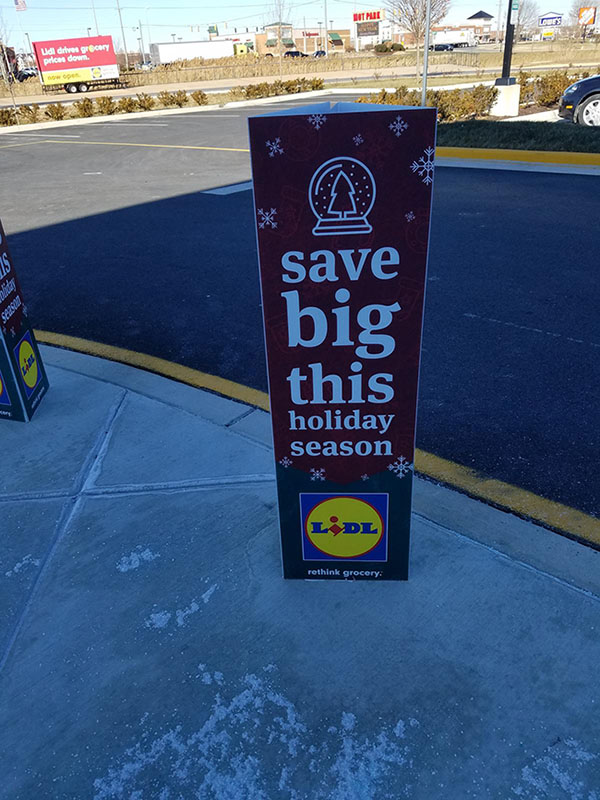 However, subsequent inquiries of Lidl in Europe by German dailies FAZ and Handelsblatt, failed to confirm the “20 stores” figure, as did Lidl’s U.S. spokesman when I asked about it this week. I have no opinion regarding’s Klum’s apparel line, but would guess the degree to which it has failed to take America by storm has a little to do with them being available only in 48 scattered and low-volume grocery stores—many in rural Southern markets that have thus far absorbed Lidl’s intrusion by simply lowering prices in proximity to the stores that have opened.

“We have not set a fixed number of stores we intend to open this year,” Lidl spokesman Will Harwood says. “However, we look forward to opening more.”

Lidl could stand to be more precise, but the vagueness of the response suggests the possibilities remain wide open, and Lidl has been known to surprise.

It would seem to me with a long road ahead until it reaches scale, and an apparent dearth of good sites for smallish grocery stores in the Southeast U.S. as demonstrated by Lidl’s shaky first months, its best chance in America might be to plow its money not into building new stores but buying them.

Although Lidl might prefer to build its own empire, it is no stranger to buying competitors in Europe, including deals to acquire Laurus stores in the Netherlands; the Plus chain in Romania and Bulgaria; and Aldi stores in Greece.

This is wild speculation on my part, but it sure makes sense were Lidl able to buy Ahold Delhaize’s Food Lion chain. With more than 1,000 units, relatively small store sizes and generally good locations close to its price-minded shoppers, Food Lion fits exactly into Lidl’s expansion path and in reach of its burgeoning distribution centers. The application of a hard-discount efficiency on top of the Food Lion footprint could make its relatively low volumes more powerful financially.

While there are no indications that Food Lion is for sale, it’s worth keeping in mind that banner is something of an outlier in the newly united Ahold Delhaize portfolio, with considerably different characteristics than its big-store, high-volume sister brands in dense Northeast markets. Food Lion has proven resilient, with strong results despite a tsunami of activity in the Southeast including the arrival of Lidl and Publix, and Walmart’s aggressive pricing actions. That’s credit to a well-conceived and well-executed “Easy Fresh and Affordable” strategic initiative by Delhaize which lowered prices and improved service and assortment at the chain, but that program is also nearly fully rolled out.

While Ahold Delhaize would need to think hard before surrendering a well-performing banner, its own long-term plans could come into consideration as well. They could take Lidl’s money and invest it in the rumored hookup with Kroger, with the Food Lion extrication taking out a good chunk of the places where those giants overlap.

Granted that’s a lot gears turning and two enormous deals, but it’s far from the only outcome if Lidl is flexible and creative. The Fresh Market and Save-A-Lot are both currently controlled by private equity interests that at some point will seek an exit strategy. The former is the right size and in most of the right places; the latter would likely require a break-up of licensed and corporate units but comes with dedicated value shoppers comfortable with the discount concept, not to mention a new CEO whose former employer happens to have been Lidl.

Is this all too ambitious and speculative? Maybe so. But as Heidi says, you’re either in or you’re out.

This is the debut of Basket Economics, a blog that will scan, weigh, price and bag issues affecting food retailing and food retailers, by WGB’s executive editor Jon Springer. Tips and comments welcome at jspringer@winsightgrocery.com or on Twitter (@_JonSpringer).