You’re a grocer who has just learned Amazon Fresh is moving to the neighborhood. Will its arrival bring an influx of local foot traffic to your store and other area retailers or will you be killed by the competition?

“This is a key question and one with a surprising answer,” says Bill Bishop, chief architect of Brick Meets Click. Bishop has spent hours shopping Amazon grocery stores and consulted with a cross section of other grocers who have done the same.

“The nut of it is, it doesn’t feel like Amazon Fresh is viewed as a serious competitive threat,” says Bishop, who has also written numerous blogs on the subject.

Based on its research, Barrington, Ill.-based Brick Meets Click’s read on Amazon Fresh “is that the stores have actually been built more to connect with younger millennial shoppers, who find them different, but a good place to shop” and “very adequate to meet their needs.”

This is potentially good news for grocers across the country, as Amazon continues to expand its growing grocery empire. In addition to eight stores already open in Southern California; four stores open in Illinois; and two in the U.K., Amazon confirmed with WGB additional stores are slated for Woodland Park and Paramus, N.J., as well as Seattle and Bellevue, Wash.

As WGB has previously reported, some industry analysts believe Amazon’s goal is ultimately 2,000 grocery retail locations across the U.S., 750 of which would be Whole Foods Market stores and the balance Amazon Fresh.

“Stepping back, we see Amazon’s strategy with these stores as growing their share in grocery, particularly delivery. The stores serve as both a retail store and a major hub for e-comm delivery,” notes Bishop. “During a number of the visits we made to Amazon Fresh, there were actually more professional Amazon shoppers [in] the store than regular grocery shoppers and you could see significant volumes of delivery leaving the store.”

In his March 1 blog titled, “Amazon Fresh Through the Eyes of a Grocery Executive: The Good, the Bad and the Employees,” Bishop says, “Even though Amazon Fresh probably won’t become the main grocery store for many shoppers, the store reflects a bigger issue: that many younger shoppers (and employees as well) don’t find a big supermarket compelling or relevant—and this is a challenge which can’t be ignored.”

The blog also documents the candid reaction of one grocery executive who had recently visited two of the Chicago-area Amazon Fresh stores. While the executive noted highlights like a friendly greeting and introduction to the Dash Cart, enticing meal solutions, and good prices on chicken breasts, the executive found other areas of the store lacking—from painfully “dry” perch at the fish counter to a small service deli and “blah” center store.

But Amazon is a power buyer and thus can’t be counted out, says Chris Jones, SVP of government relations and counsel for the National Grocers Association (NGA).

“One of the things that gets missed about Amazon moving into the grocery space is the fact that their size and their scale already makes them a power buyer, so they can come in and … dictate terms of trade and get exclusive product offerings at lower prices that would disadvantage their competitors and give higher prices and less choice to independent grocers,” said Jones during a NGA press call on supply issues at local, independent grocers last month.

In terms of customer experience, WGB sent a non-industry “secret shopper” to the Woodland Hills, Calif., location on opening day, who was by and large impressed by the grocer’s curated offerings.

And a new report by foot traffic analytics firm Placer.ai that looks at how Amazon Fresh is faring against rivals in Southern California, finds that in an already-saturated market, the grocer is, “perhaps surprisingly, holding its own against entrenched grocery competitors.” 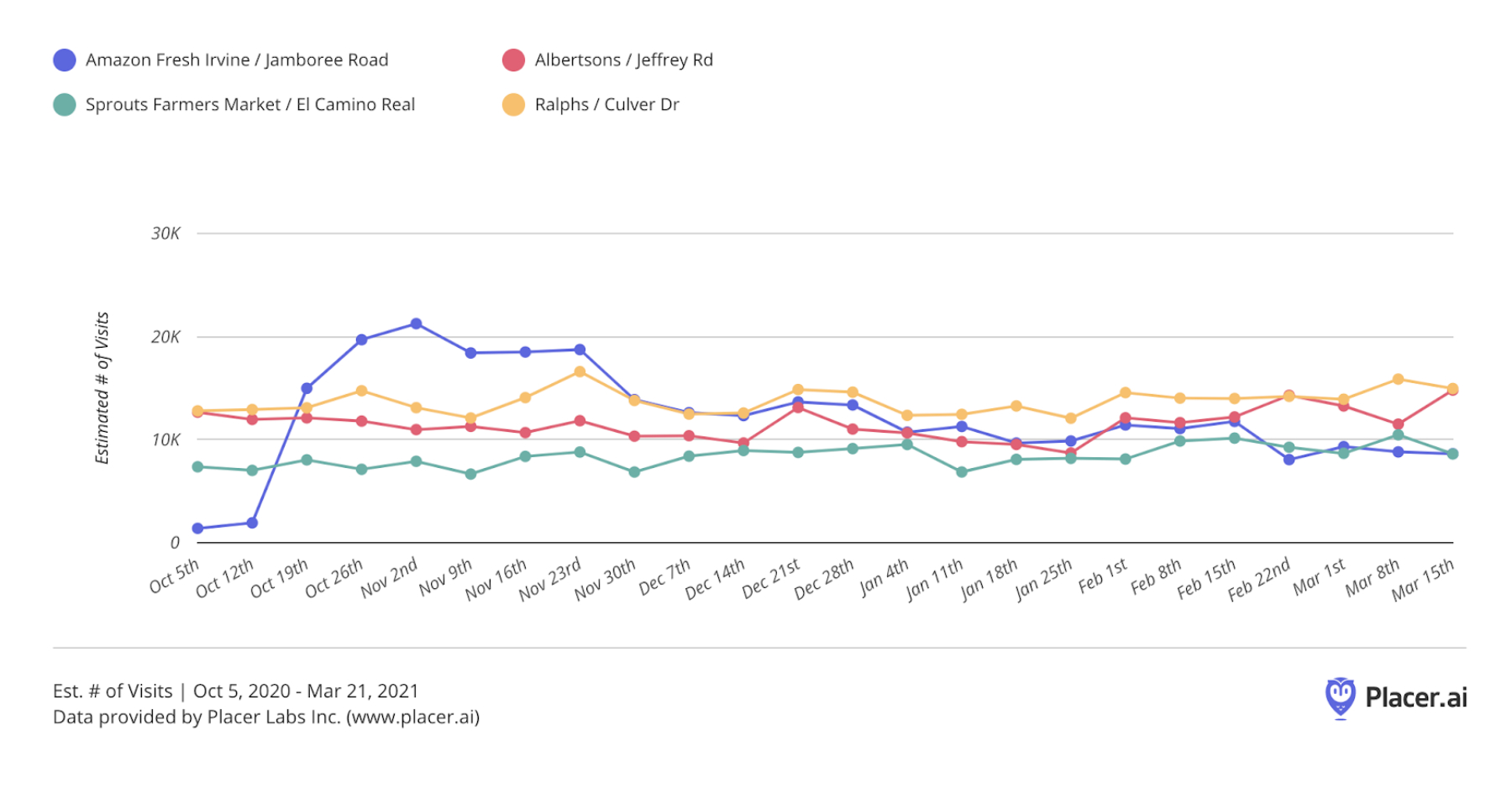 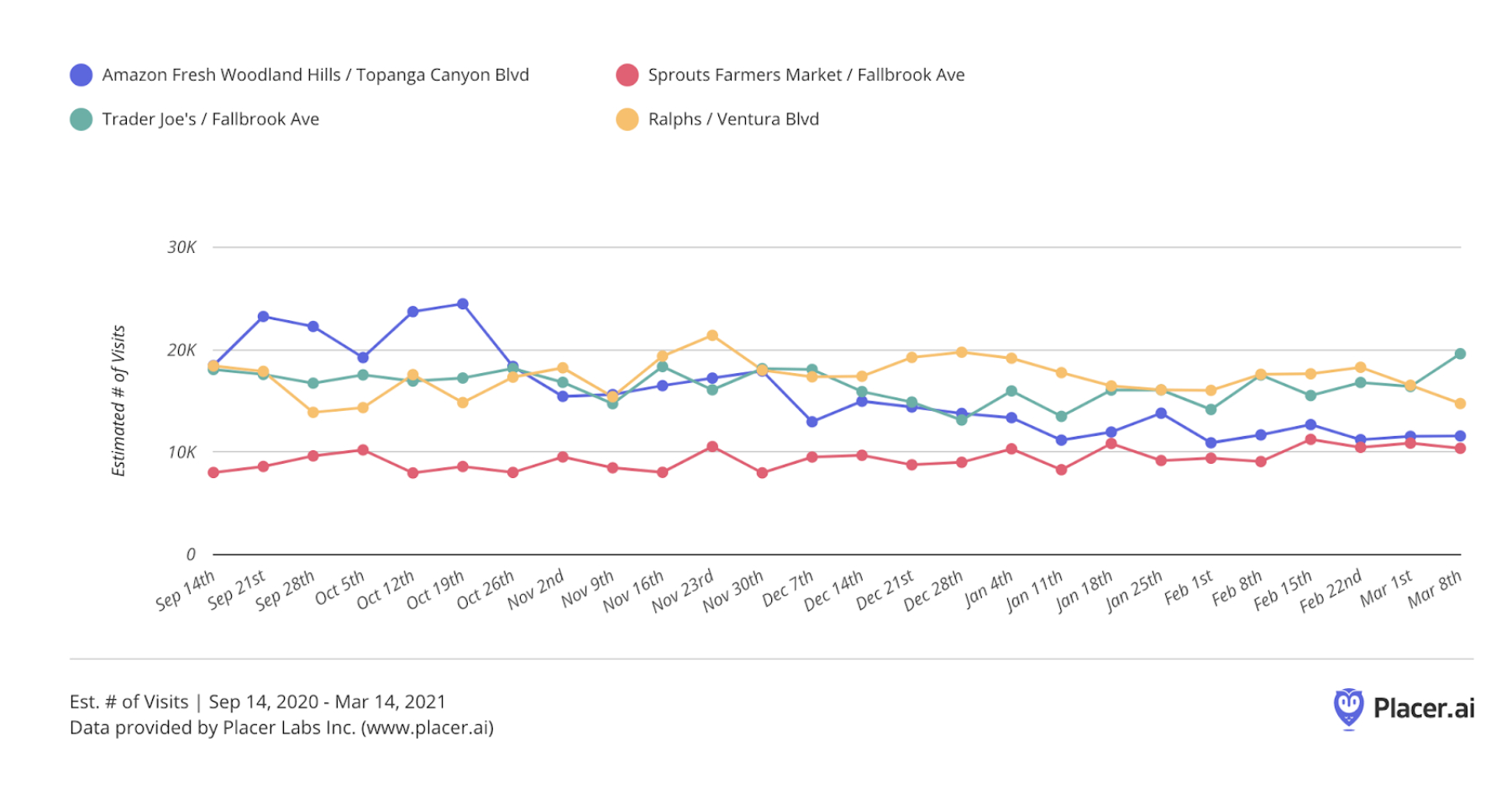 The report this month notes that among the five Amazon Fresh locations in California that Placer.ai examined—where the competition includes Ralphs, Sprouts Farmers Market, Albertsons, Vons and Trader Joe’s—while Amazon Fresh stores “are not exactly killing it,” they “are performing relatively well, all things considered.”

For example, Placer.ai foot traffic data found that the Amazon Fresh location in Woodland Hills, as of early March, sees an average of 11,000 visitors per day—beating Sprouts and just trailing Ralphs, which sees about 15,000 a day. The data further notes that Ralphs is the top competitor in the market with an average cross-shopping rate of 75.3% during January and February.

The key question for Amazon Fresh, says the foot traffic data firm, is whether the brand can settle in and become a market mainstay. “That’s yet to be seen, as it’s still young. However, the foot traffic data suggests that shoppers are adopting the brand, and that with time, Amazon Fresh stores may become yet another American grocery store fixture,” says the company. 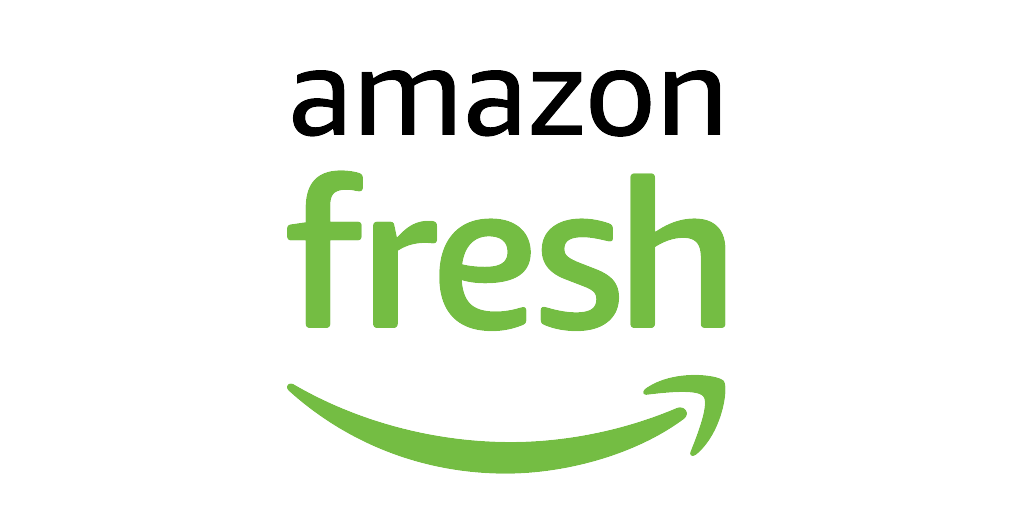 For shoppers who wished there was a store that combined their favorite Whole Foods products with mainstream grocery items such as Coca-Cola and Kraft Mac and Cheese, and accompanied this magical mixture with the online-savvy, delivery, Alexa-enabled and checkout-free technology of Amazon, dreams do come true. Amazon Fresh, which opened its new Woodland Hills, Calif., location to select customers on Aug. 27, plans to welcome the public in the coming weeks. 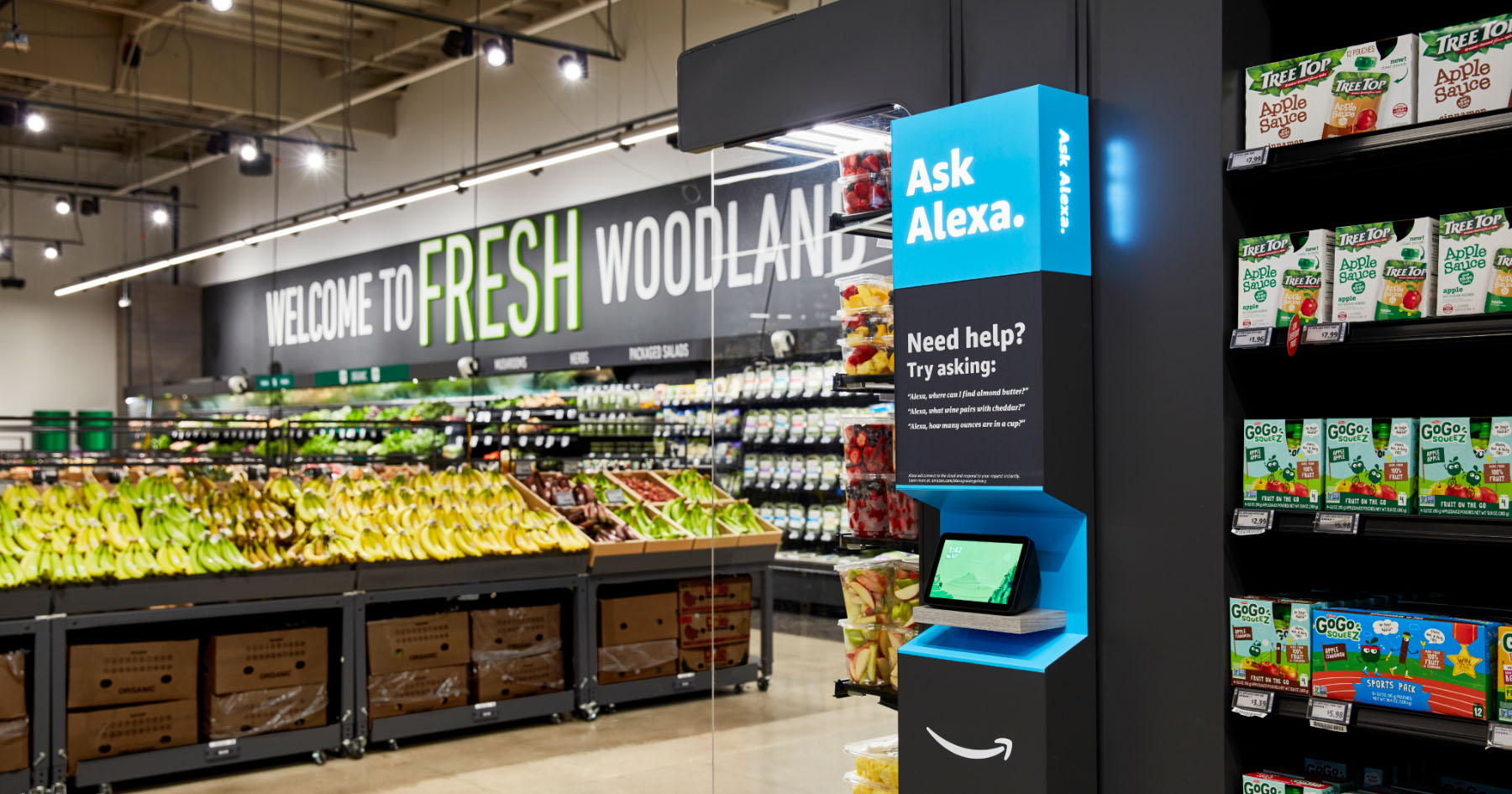 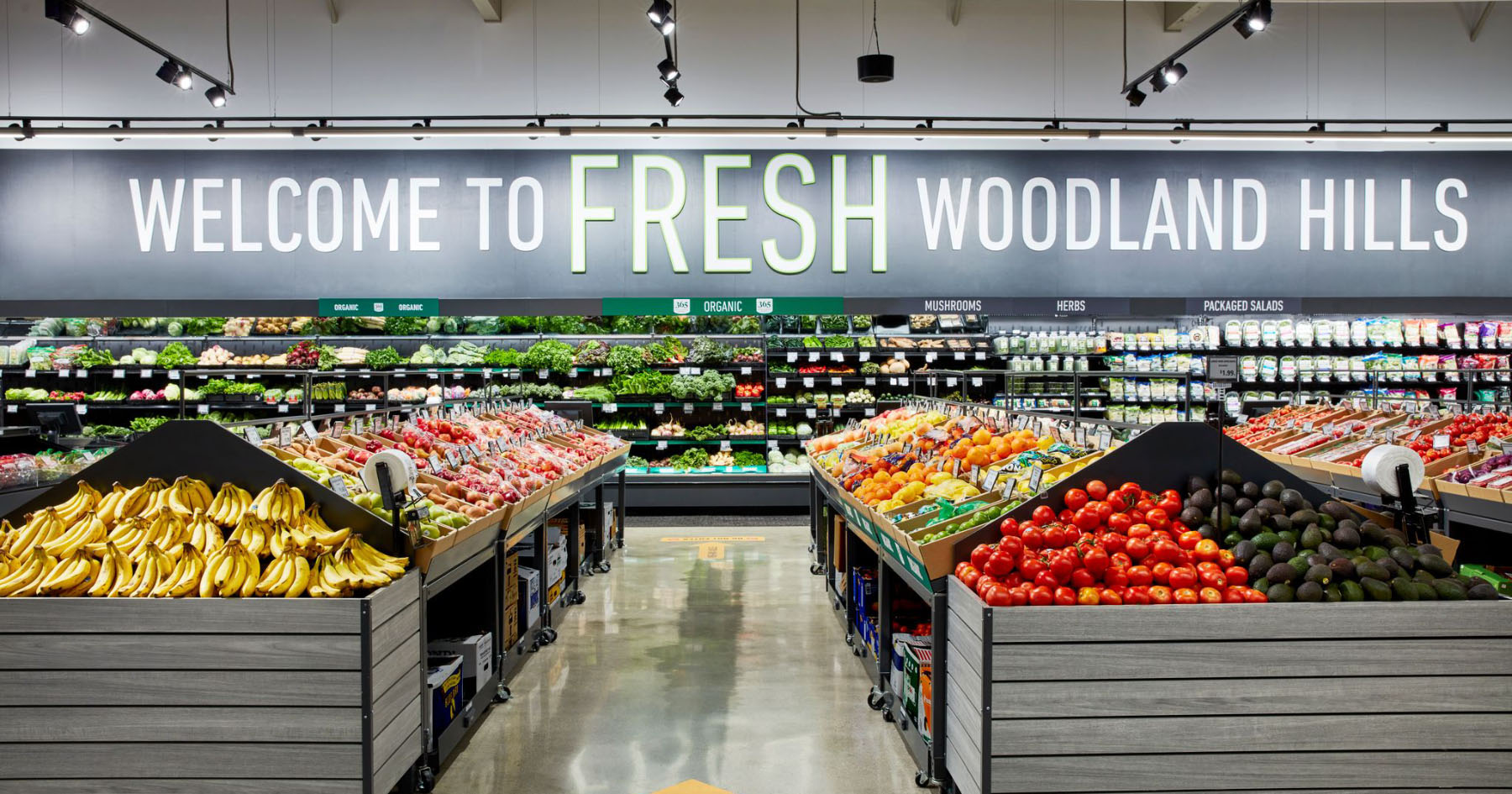 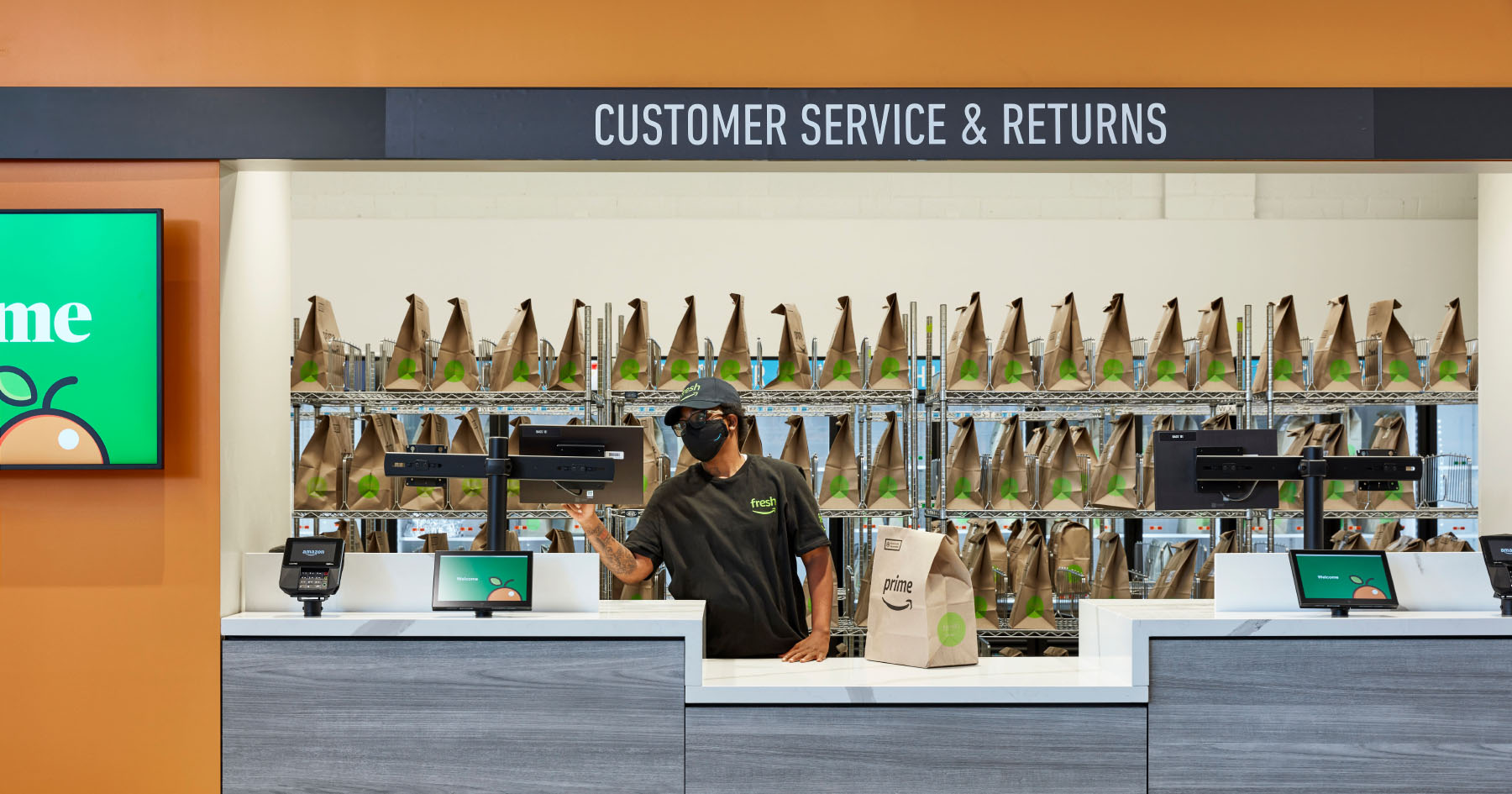 “Customers can find items in the store more quickly by using Alexa and Alexa shopping lists,” according to the Amazon Fresh blog. “When customers arrive in-store, they can access their Alexa shopping list through the Amazon app or on the Amazon Dash Cart, enabling them to quickly navigate aisles and check off items as they shop. Throughout the store we have Amazon Echo Show devices available to ask Alexa for help—simply say, ‘Alexa, where can I find the hot sauce?’ ”

Unlike sister store Whole Foods Market, which is often referred to as “Whole Paycheck,” the Amazon Fresh store said it “offers consistently low prices for all” and free same-day delivery and pickup for Prime members. Here, the Amazon Dash Cart is also in play, allowing customers to skip the checkout line. Shoppers sign into the cart using a QR code on their Amazon app, and then place their bags in the cart, shop and exit through the Dash Cart lane. The cart uses a combination of computer vision algorithms and sensor fusion to identify items in the cart.

The store also features a wide assortment of national brands and high-quality produce, meat and seafood, as well as a variety of prepared foods made fresh in-store every day, including fresh-baked bread, made-to-order pizzas, rotisserie chickens and hot sandwiches.

Shoppers can request Order Ahead items from the deli, meat and seafood counters, as well as whole pizzas via the Amazon app when they arrive in-store or on the way there. Customers can also shop while their Order Ahead items are prepared. Amazon Fresh will notify them when the order is ready for pickup at the service counter.