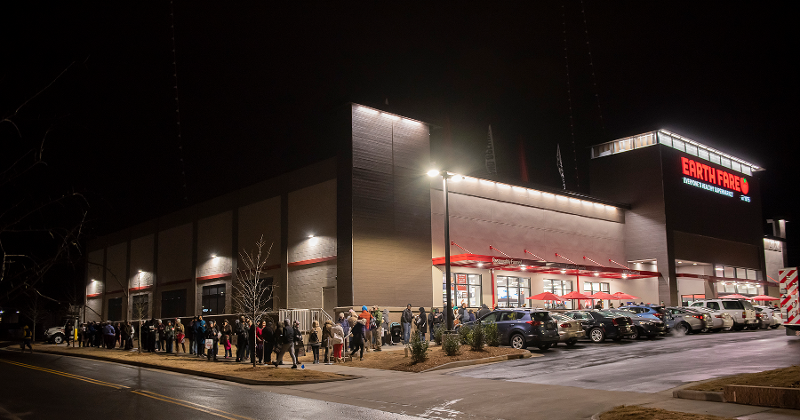 The new year is ushering in a spate of store closings for organic and natural grocer Earth Fare, which is reportedly closing three Indianapolis-area locations, one Fairfax, Va., store, and another in Florida on Jan. 11.

As recently as October, Earth Fare CEO Frank Sorpiniti told the Jacksonville Business Journal that the Asheville, N.C.-based chain of more than 50 stores would pursue aggressive expansion plans in Florida this year. It also counted a total of some 100 stores nationwide in its development pipeline.

“We’re working about 15 opportunities between Miami and Tallahassee right now,” Scorpiniti said. “That would put us at 30 stores in Florida.”

However, there are already signs plans could change. The Gainesville Sun recently reported that the 23,000-square-foot Gainesville Earth Fare at 3045 SW 34th St. is one of the locations closing on Jan. 11.

The flurry of closings have refueled rumors of a possible Earth Fare sale.

Earth Fare has reportedly been for sale for a while, said Burt P. Flickinger III, managing director with Strategic Resource Group, a New York -based consumer industry business consulting firm.

The company did not respond to a request for comment.

“Strategically it makes the most sense for Earth Fare to close its most underperforming stores, which are spread out in different areas of the country, where stores lack sufficient size and scale,” Flickinger said.

But while its Gainesville store is slated for closure, Earth Fare remains on track for 2020 openings in Lady Lake and Deland, Fla., according to Planned Grocery, a service of Beitz and Daigh Geographics. That service also shows new Earth Fare stores planned or proposed in the Florida cities of Pembroke Pines, Sarasota and Winter Garden. An Earth Fare also opened in October in St. John’s, Fla.

“Florida makes sense for Earth Fare, as it’s one of their best legacy markets and has the best grocery growth rate,” said Flickinger. Another possible boon to Earth Fare in the Sunshine State? Kroger’s forthcoming divestiture of its stake in the Lucky’s Market chain, which operates 39 stores, most of them in Florida.

The 2016 deal for Niwot, Colo.-based Lucky’s grew out of Kroger’s interest in a vehicle providing value-priced, on-trend food as well as a potential avenue to expand in Florida, where it did not previously have stores.

“This is a process that will take time as we work with the current ownership group to determine best steps for moving forward,” said Krista Torvik of Lucky’s Market, regarding Kroger’s intent to divest ownership. “In the meantime, we are as committed as ever to bringing more healthful foods to more people in the communities we serve.”

It’s unclear what the outcome of the Kroger/Lucky’s breakup will mean for Lucky’s existing stores, as well as its stores in development, but should it lead to Lucky’s shuttering sites in Florida, Earth Fare could prove a beneficiary. There are 15 Lucky’s stores under construction in Florida, according to Planned Grocery, and another four units either proposed or planned.

“Closings [of Lucky’s stores] will help,” said Flickinger of Earth Fare’s viability in Florida. “An Earth Fare sale is definitely not happening soon. It’s not imminent.”