Winn-Dixie didn’t grow to be 95 years old without developing some resiliency along the way.

During the course of a difficult 2018, for example, the Jacksonville, Fla,-based retailer saw a debt-related bankruptcy at its parent company interrupt an ongoing turnaround, not long after after which Hurricane Michael laid waste to more than half its stores in the Florida Panhandle community of Panama City.

While the bankruptcy was relatively quick and painless as retail reorganizations go, the Hurricane was a deeply emotional event for Anthony Hucker, CEO of Winn-Dixie’s parent company, Southeastern Grocers. And in the spirit of the brand’s resiliency—and that of the community it serves—he is proud to be playing a role in their new beginning.

On Oct. 10, 2018, Hurricane Michael made landfall as the first Category 5 hurricane to reach the U.S. mainland since Hurricane Andrew ravaged South Florida in 1992. Winds exceeding 160 miles per hour at their peak caused widespread catastrophic devastation to homes, businesses and trees around the Panhandle.

“This was a very, very personal thing to have experienced,” Hucker said in an exclusive interview with WGB. “As soon as it was safe, I took a team down to go and walk through what actually happened. It was just devastating; you are completely humbled by the effects. ... It really humbles you as a human being to see the aftermath of something like that.”

Surveying the damage to Winn-Dixie’s properties, it was evident that four of the seven stores serving the Panama City area were total losses and would have to be rebuilt from the ground up (Winn-Dixie opened temporary stores in trailers at some sites). Two of those stores, known as the Transmitter Road (pictured before and after, above) and Parker stores, reopened on Sept. 18. The other two, in Panama City and Lynn Haven, are expected to reopen Oct. 16.

The new stores, Hucker said, are important to Winn-Dixie not just as a means to get business going again, but to symbolize a resurgent community that adopted a trending slogan—#850Strong—as a rallying cry to rebuild the “850” area code.

“We felt like we had a responsibility to the community to rebuild the infrastructure and make it a better place than it was; to rebuild a community together,” Hucker said.

'Voting With Their Feet'

The new units—among 50 grand reopenings this year throughout Southeastern Grocers—are also helping to continue a lengthy turnaround plan that began three years ago by Hucker’s predecessor, Ian McLeod. The initiative has multiple facets, built first around what Hucker described as “correcting the basics” in areas such as pricing and assortment, then activating those changes in eye-opening renewed stores. Despite a tight budget owing to the debt concerns that triggered last year’s prepackaged Chapter 11, the company has completed more than 200 renovations in the past three years. The company has also not hesitated to close or convert stores it feels are not competing.

Winn-Dixie’s new units, like those opening now around Panama City, include trend-right takes in areas such as fresh produce, prepared foods, organics, and beer and wine, along with budget-friendly dollar shops and a revamped 8,000-item private label that’s taken a special aim at quality, with items such as its Prestige ice cream winning national acclaim. Revamped stores, Hucker said, bring a “wow factor” behind arresting bright red facades and bold signage. Some include specialty departments, such as taprooms and barbecue smokehouses.

Although Hucker declined to provide financial details, he said evidence that the corrections have taken root is on the balance sheet—and the work remaking stores is evident in increased traffic. 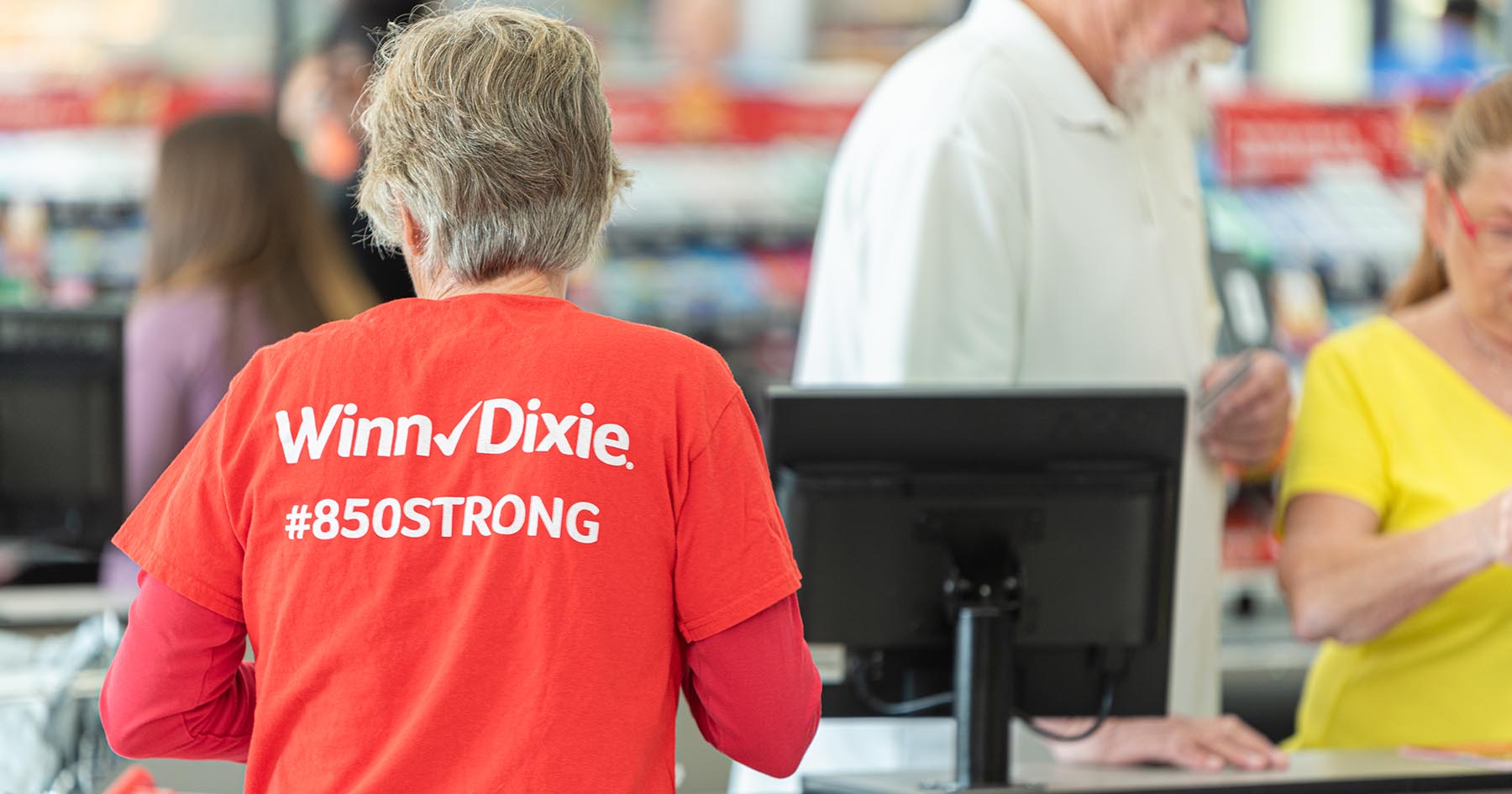 “Our customers are voting with their feet and their responsiveness to us, as evidenced by the number of customers and the community backing we’ve gotten, has been second-to-none,” he said.

While Winn-Dixie’s home state of Florida has been the destination for a rash of trendy new food stores such as Sprouts and Lucky’s—and is home to a formidable larger rival, Publix—“we love competition because it makes us better and stronger,” said Hucker. He counts a strong loyalty program, convenience options such as e-commerce through Shipt and a “supercharged” private label program among its unique advantages.

“The good news is, we’ve been here nearly 100 years. We know how to compete in the marketplace and we’re aware of the ever-changing needs of today’s grocery shoppers,” he said. “I think our company is very well-suited in terms of trying to offer our customers the best quality and convenience. We’ve partnered  with Shipt to better serve customers, and that’s going very well indeed. We have an amazing loyalty reward program that many of the other retailers don’t have. It’s a key differentiator for us. Customers are telling us they like what we’re doing.”

The turnaround plan, now a little more than halfway through its five-year window, also contemplates “getting ourselves fit for purpose, which is in service of getting ourselves set for growth,” Hucker said.

In Panama City, workers are embracing the #850Strong movement by wearing the slogan as part of their uniforms. Southeastern Grocers honored the movement at a ceremony for the reopened units, presenting donations of 850 relief items to the Northwest Florida Chapter of the American Red Cross (a $4,000 value), 850 trees to ReTreePC to help repopulate the area’s canopy (a $7,650 value) and enough Southeastern Grocers shelf-stable items and fresh produce to feed 850 families (a $42,500 value), donated to Feeding the Gulf Coast.

“You have to understand we’ve been in these communities for 60 or 70 years,” Hucker said. “So it was important for us not just to bandage over the damage but to build sustainable stores and services that the community in Panama City can count on.”