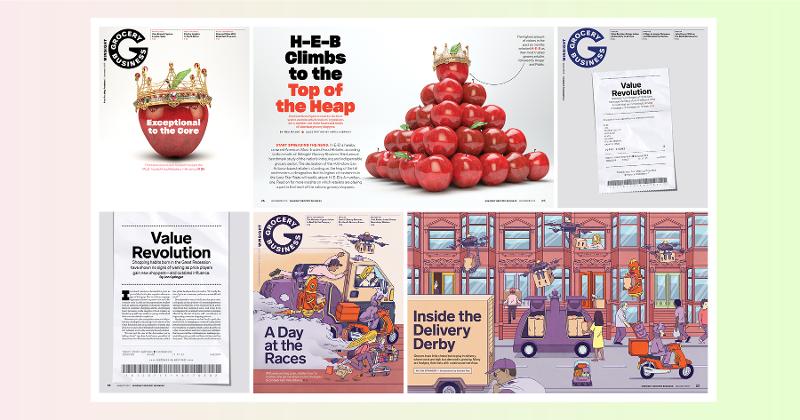 Winsight Grocery Business has been chosen as a finalist in three categories for the 66th Jesse H. Neal Awards, a premier awards program honoring excellence in business-to-business journalism, including editorial and design.

“We’re honored to be chosen as a finalist in three categories by Connectiv for the 2020 Jesse H. Neal Awards, which are a testament to our goal of producing the most comprehensive intelligence for retail food industry decision-makers,” said Meg Major, WGB’s VP of content.

“In one of the most seminal years in the history of modern food retailing, WGB led the way in 2019 with the most robust and relevant industry coverage with both our print and digital content. These Jesse H. Neal Awards nominations affirm our brand’s surging clout—which transpired just two years after a total rebrand/relaunch—and further reflect the talents of our team of editors and designers, who produced an exceptional collection of outstanding work in 2019. We are extremely proud to be recognized among the best business publications in the nation,” Major added.

“The quality and range of this year’s field of competitors was inspiring,” said David Longobardi, chair of the Neal Awards and chief content officer of CyberRisk Alliance. “We saw truly high-impact work from many brands, unlocking new information and insights, and telling new stories, with far-reaching implications. And we saw several relatively new contenders earn their way to the front of pack.”

Finalists for the Neal Awards were announced earlier this month following a comprehensive and rigorous evaluation process by peer professionals. Winsight Media is among five companies with the most finalists in the 2020 competition. WGB’s sister Winsight brands, including CSP, Restaurant Business and FoodService Director, also earned a number of Neal Awards nominations.

“For 66 years, the annual Neal Awards place a spotlight on the best of the best in B2B journalism. The Neals recognize the editors, journalists, technologists, executives and creatives, along with the cutting-edge technical platforms and services, that make this sector so important, effective and innovative,” Jeff Joseph, president of the Software & Information Industry Association, said in a statement. “We live in a time in which the work our finalists do—presenting trusted information in a dynamic manner—has never been more important. These honorees reflect and inform us about the critical, real-life issues facing the many industries they represent, our nation and our world. Congrats to all of our finalists and to our judges.”