The Giant Co. will add a distinctive signature to its ongoing invasion of Philadelphia on March 19 when it opens a flagship two-level store in the city’s Logan Square neighborhood.

The Riverwalk store, in development for more than two years, will bring what the company said was an innovative design and curated offering that “celebrates the company’s love for feeding families and the Philadelphians it serves.”

It will include a first-of-its-kind Food Hall, including outposts of local restaurant brands in support of its newly launched “For Today’s Table” branding platform; the company’s largest offering of beer and wine, including a 40-tap Beer Garden; and the largest selection of plant-based foods in the chain.

“Philadelphia’s grocery scene is experiencing a major renaissance and The Giant Co. has been at the forefront, introducing new formats, opening new stores and expanding grocery delivery services. Our Riverwalk store celebrates this transformation, offering an elevated omnichannel grocery experience unlike anything Philadelphia has ever seen,” said Nicholas Bertram, president of the Carlisle, Pa.-based Ahold Delhaize division, in a release. “Expertly designed to meet the needs of urban dwellers, our Riverwalk store is the perfect blend of modern sophistication and surprise, and of course, pays homage to the city’s fantastic food scene. We can’t wait for opening day and to finally let the community discover what we’ve created for them—a one-stop destination for all things food.”

First announced in 2019 as a centerpiece of the Logan Square neighborhood’s new Riverwalk mixed-use development project, the 65,000-square-foot store is located on the second floor of a 25-story residential tower. Chute Gerdeman, an award-winning retail design and branding firm based in Columbus, Ohio, helped to design it. Riverwalk incorporates design elements inspired by the company’s heritage as well as its Giant Heirloom Market format, with wood elements and its signature colors, red and black.

Chute Gerdeman was the same firm behind store design and branding changes at Giant’s Ahold Delhaize sister company Food Lion, carrying out its “Easy, Fresh and Affordable” brand renewal that has proven to be one of the industry’s biggest success stories over the past decade.

Giant, with roots in the Harrisburg market and a strong brand in Philadelphia’s suburbs, is a relative newcomer to high-rise retail. But since 2018, the company has invested millions to penetrate Philadelphia’s urban core. The company introduced the Heirloom Market small-store format there in 2019 and and has since opened two more Heirloom stores. Sources have said it was exploring another site at the historic former Strawbridge’s department store on Market Street.

Earlier this week Giant provided details on a forthcoming e-commerce fulfillment center to be built in Philadelphia’s Eastwick neighborhood, mainly to carry out delivery orders, and which will use sophisticated robotic hardware from the Norwegian company AutoStore—one of its first U.S. grocery deployments. Giant also said recently it would build a new supermarket in Northeast Philadelphia.

These moves have been aggressive for a city long home to brands such as Acme and ShopRite and in recent years expansion by specialty players like Trader Joe’s, Whole Foods and Sprouts. 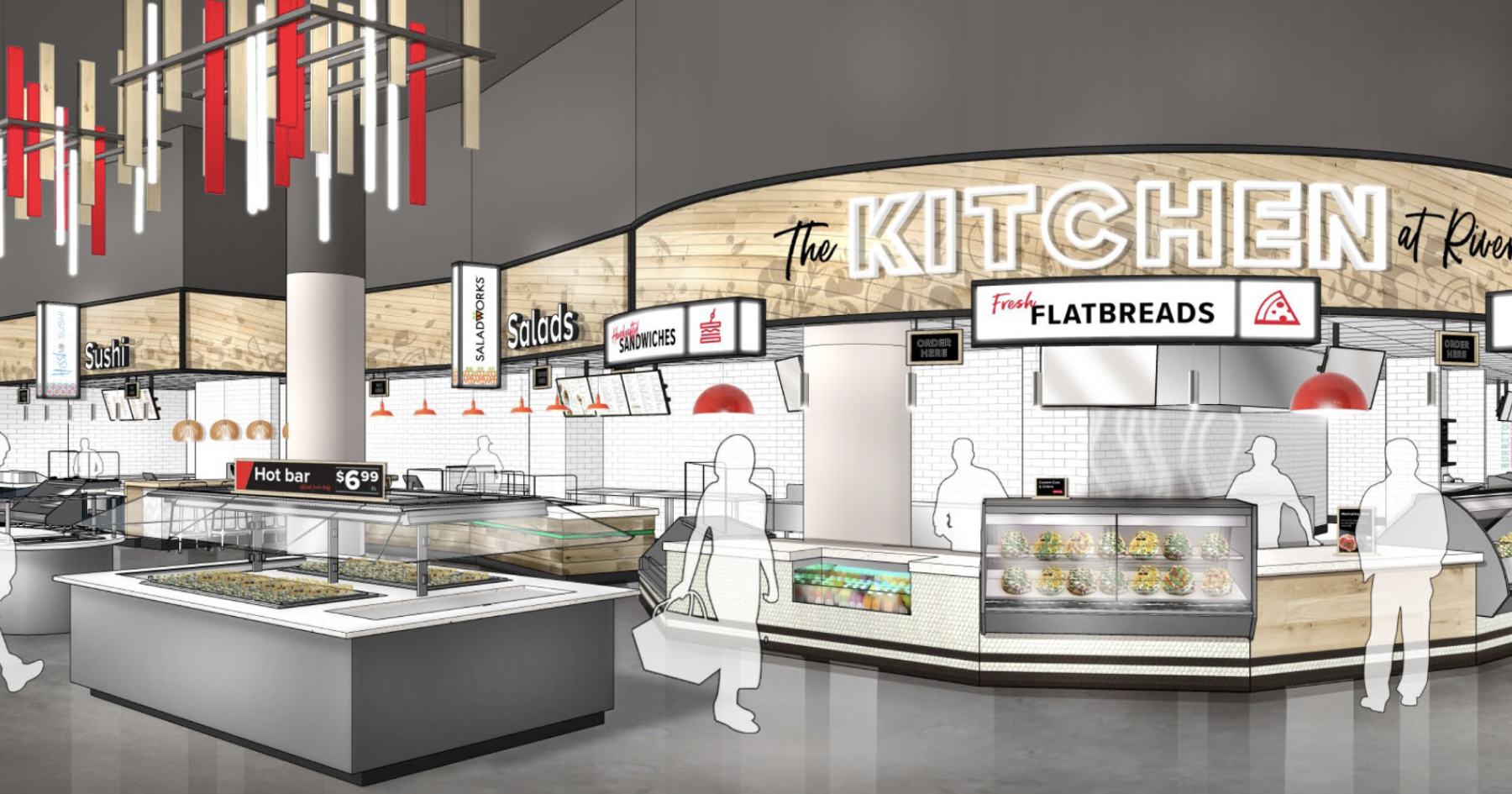 Food Hall offers a spacious area to safely enjoy a meal overlooking the Schuylkill River, 30th Street Station, and the riverside bike path. Customers can also enjoy food and drink from the Food Hall and store on a picturesque terrace, complete with lounge-style furniture and fire pits.

“Our new brand platform, For Today’s Table, is all about encouraging families to connect over a meal; it’s what we stand for and guides all that we do,”  Bertram said. “Our Riverwalk store brings For Today’s Table to life in a way that until now, we have only dreamed about. It’s the sum of the team’s very best work and is a tangible symbol of The Giant Co.'s continued focus on omnichannel growth, innovation and above all else, families and community.”

The Riverwalk store has a ground-level parking garage with direct access to the store’s lobby. Upon entering the lobby, which is accented by the work of local artists, a full-size Starbucks awaits, as does a Giant Direct pickup station for orders placed online.

Customers will use an elevator, escalator or stairs to reach the full store on the second floor; a dedicated "cartalator" will transport shopping carts between levels. Residents of the living space above the store have exclusive access to a private elevator, bringing them directly from their apartment to the second level sales floor.

In response to the growing demand for meat-free alternatives, the Riverwalk store will feature the company’s largest plant-based section to date. Customers will find meat and fish substitutes, including Impossible and Beyond products, vegan cheeses, ice creams and other desserts.

A full-service meat and seafood department includes a newly introduced aged beef program with steakhouse-quality cuts, such as bone-in rib eyes and strips, aged in-house for up to 42 days. The store will also offer a wide range of fresh, sustainably sourced seafood, including fish, lobster and shellfish.

The Riverwalk location will also include a large cheese section, offering a wide assortment of domestic and imported cheeses, plus selections from Philabundance’s Abundantly Good cheese label that helps support dairy farmers in the commonwealth. Customers will be able to receive food and wine pairing recommendations.

A full-service deli will offer Boar’s Head deli meats and cheeses along with an expanded selection of prepared foods and grab-and-go meals, Giant said. The department also includes a charcuterie station and a mozzarella station featuring cannoli and more from Spring Grove, Pa.-based Caputo Brothers Creamery.

Jessica Fischer, a 22-year veteran who most recently was managing the University City Giant Heirloom Market, was named the manager of the forthcoming store.

“Having been with the company for more than 20 years, I can confidently say that in everything we do, we aspire to deliver a grocery experience that inspires and excites our customers and to be a community partner that lifts up the families and neighborhoods we serve in every sense of the word—Riverwalk will be no different,” Fischer said in a release. “I know I speak for the whole team when I say we can’t wait to return the warm welcome we’ve received and show our neighbors that we aren’t just another grocery store and that The Giant Co. is a partner they can count on, and one that will grow alongside them.”