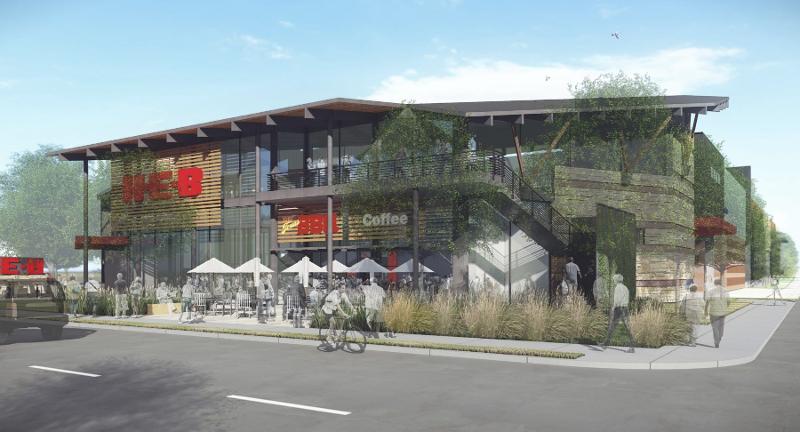 The 97,000-square-foot store, located at 715 S. Exposition Blvd., will feature a two-story porch with views of Lake Austin, the retailer said.

“It will include features and innovations that make it a community gathering place,” H-E-B said.

Those features include several dining options, including a True Texas BBQ restaurant with a full bar and indoor and outdoor seating; a SouthFlo Pizza restaurant; and a coffee shop that will serve specialty beverages as well as housemade breakfast tacos.

The new H-E-B will have three elevators, an open stairway, and multiple escalators and cart escalators to bring shoppers to the second-level sales floor.

An underground parking lot will “ensure the store has a welcoming, pedestrian-friendly perimeter with wide sidewalks to encourage walking and biking to the store as well as street-level landscape that softens the store’s impact on the neighborhood,” H-E-B said.

H-E-B first announced plans for the Lake Austin store in 2019, saying at the time that it was expected to open in 2021. But those plans were interrupted due to pandemic-related construction delays. At that time, the store was also projected to be about 13,000-square-feet larger than it is now.

In addition to the restaurant options, the new H-E-B will include the company’s largest prepared-foods department, with ready-to-eat foods, housemade sushi and cooking demos.

The store will also house a meat market with fresh and fully cooked choices, as well as a fresh seafood counter, large beer and wine selection, bakery featuring house-made tortillas, and a large selection of organic and Texas-grown produce.

“Design also will involve several environmental sustainability elements such as energy-efficient refrigeration with condensation capture for landscape irrigation as well as rooftop solar panels and EV chargers, which will be installed soon after the store opens,” the company said in a statement.

H-E-B has been growing swiftly in its home state. Last month, the grocer opened three new stores—in Willis, Magnolia and Plano—in one day. The grocer currently operates more than 420 locations in Texas and Mexico.